‘Grit’ is the success factor 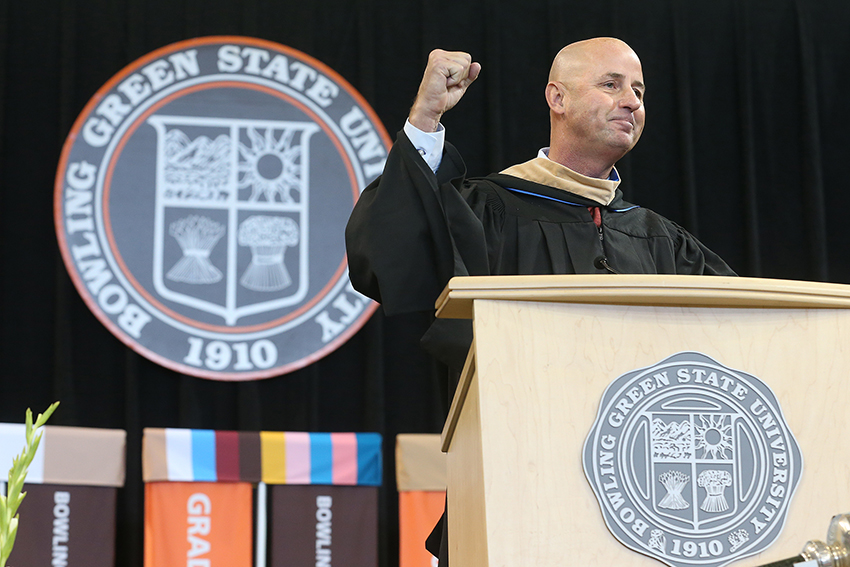 Grit. Not a pretty word, but an essential quality for success in life, and one that Bowling Green State University students tend to possess, Brady Young told graduates in his commencement address Aug. 5. That “drive and determination to succeed and accomplish your goals will ultimately win the day,” he said.

“Thirty-five years ago I was sitting where you are – excited and maybe a little nervous about leaving the familiar and friendly world of Bowling Green,” Young said.

Today Young, who graduated from BGSU with a degree in business in 1982, is principal owner of Strategic Risk Solutions (SRS) and serves as the firm’s president and CEO. SRS sets up and manages insurance companies for various business and institutions. It is the largest independent captive management firm in the world. Young has been with SRS since its inception in 1993 and led the management buyout of the company to establish it as an independent entity in 2002. He has more than 30 years of experience working with major public, nonprofit and privately held organizations to help them manage risk, develop risk financing strategies and optimize the role of their captive insurers.

“I have sat in business meetings over the years in London, New York and elsewhere surrounded by colleagues and others with advanced degrees from Harvard, Princeton, Columbia and other Ivy League schools and was not intimidated by them one bit,” said Young, who resides in the Atlanta suburb of Roswell. “What I learned at BGSU and at graduate school (at Georgia State University) combined with great work experiences gave me, a kid from Zanesville, Ohio, the confidence that I could compete with anyone in my field.

“I have met many other BGSU alumni who have achieved amazing things in their respective fields. I don’t care what your major is you can go as far as you want to go. Why? Because besides our degrees, we Falcons share something else that it is also critical for life: determination.”

“Some of the professors I had at Bowling Green had a huge influence on my life,” he said. “One in particular, Darwin Close, was a great mentor and became like a second father to me. He helped open my eyes and expand my horizons.”

“Some of the professors I had at Bowling Green had a huge influence on my life,” he said. “One in particular, Darwin Close, was a great mentor and became like a second father to me. He helped open my eyes and expand my horizons.”

Young said he applied what he learned from his upbringing and his time as a BGSU student to not only build his business but also to get through some of the challenges and “nasty curveballs” such as health problems and financial stress that life has thrown at him.

“I hate to be the bearer of bad news on a day that is supposed to all about celebration, but all of you are going to face challenges like these as you begin the next phases of your life,” he said.  “Jobs, relationships and family are a potent brew that produce all kinds of wonderful but also challenging experiences. The good news is you can deal with it! You come from good families, have inner strength and a strong work ethic and a degree from BGSU that give you the foundation and the tools to take you anywhere you want to go.”

He said the unwillingness to give up until you reach your objectives is the “X factor” in life that makes the difference. “Anybody ever heard of Tom Brady, who went to school up the road at Michigan and barely played until his senior year? He was drafted in the sixth round by the Patriots and has won a few super bowls and had a pretty decent career so far.

“You should all read the new biography on Elon Musk, the founder of Tesla, Space X and Sun City,” Young told the graduates. “He was close to failure many times but never gave up. The history of Apple is similar. Steve Jobs faced a lot of struggles along the way but not quit. Smart guys, yes, but more importantly they had grit.

“Dealing with success is easy. Your life will be defined by how you deal with adversity.”

He also encouraged the students to remember, the midst of what are bound to be busy lives, to make time for friendship. He still stays in touch and gets together with his old BGSU friends each year even though they are scattered around the United States.

“I am a strong believer in making time for friends – it’s a great investment,” he said.

And although the young alumni will be working hard to launch their careers and might not yet have financial resources, Young reminded them that they do have time.

“We all have 24 hours a day and seven days a week to work with. Give some of that time to a worthwhile cause — your church, coaching, a charity that is doing good work. Find something that resonates with you and get involved.”

“Start as soon as you can in giving a little money to worthwhile organizations and more when and if you are in the position to do so,” the community leader advised the graduates.

“I want to close my remarks by asking a simple favor of each of you. Give something back to others! The world is a tough place these days and the safety net is shrinking for many. Help others with your time and financial resources when you are able. In my experience it will enrich your life in so many ways. And remember, Falcons can do anything.”