From patient to practitioner 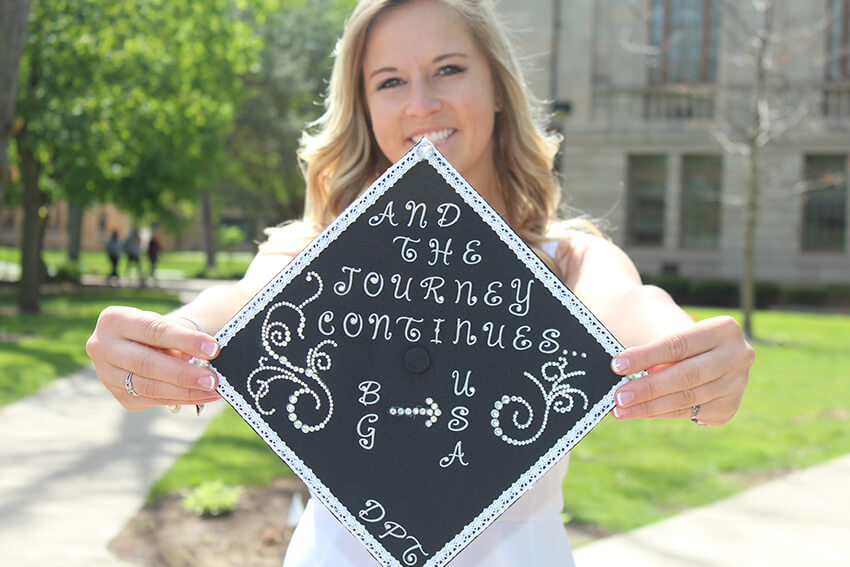 After training and competing as a gymnast for most of her life, Rachel Reis is no stranger to injuries. As a young athlete, she dealt with injuries to her shoulder, ankle and a kneecap that was dislocated seven different times, eventually requiring surgery.

But through all her treatment regimens, there was a bright side: Reis discovered her calling as a physical therapist.

“As an athlete, I saw how important physical therapy was to provide healing and help athletes recover from surgery and get back into their sport,” Reis said. “I knew it would be rewarding work, and having been on the other side of the table, I could really empathize with the patients.”

When it came to her collegiate search, Reis was looking for a school that excelled academically in the field of exercise science, as well as in gymnastics. She found both in Bowling Green State University.

“When I came to visit Bowling Green, I loved the team, I loved the campus, everything seemed to fit me,” she said.

As an exercise science major, she also knew she would benefit from the field experiences, low student-to-faculty ratio and hands-on learning in state-of-the-art laboratories.

Graduates of the program also have high acceptance rate into professional programs. Reis can now count herself in that group since she will be starting on her doctorate in physical therapy this fall at a university in her home state of Florida.

During her time at BGSU, Reis made quite an impact both as a student and as an athlete. She’s graduating with the President’s Award in Academic Achievement in recognition of her 4.0 GPA. It’s a commendable achievement considering her demanding practice and meet schedule.

“As a student-athlete at BGSU, ‘student’ always comes first,” she said. “We are always reminded to keep our academics as a priority. I made sure to take advantage of all the mandated study hours.”

Reis admits her competitive spirit played a role in her academic success a well. 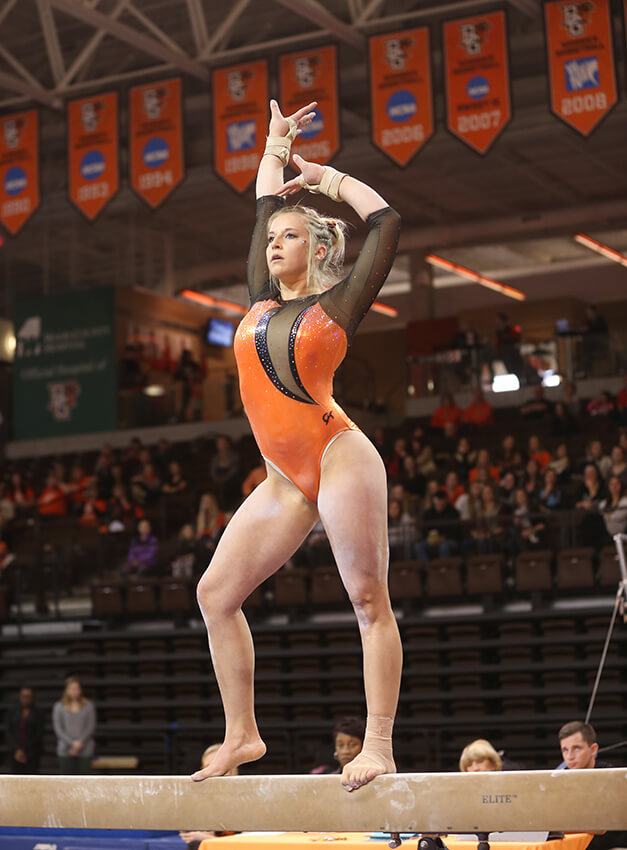 “Growing up, I had an older brother who is 16 months older than me,” she said. “Everything we did was a competition, including our grades. We have always tried to see who could do better.

“I think those habits that I developed in high school leading up to college helped me. I just had the drive and the study habits.”

The combination of academic and athletic prowess earned her the title of MAC Distinguished Scholar Athlete this year. As a standout senior, she competed in 12 of 13 meets for BGSU as a bars specialist. In a match against rival Central Michigan, she set a personal record and tied for first with 9.875 – a score that was best for BGSU all season on bars and helped the Falcons win at CMU for first time in 30 years. During her senior year, the team also placed in the top three at the MAC Championships – another first in three decades for the team.

“My favorite memory, though, would probably be my junior year when our team made it to regionals for the first time in 25 years,” she said. “The excitement of making it was like nothing I had felt before. And going to regionals and having a crowd that big and teams of that caliber was nothing we’d ever experienced before.”

In her post-BGSU life, Reis looks forward to helping other athletes achieve their goals. Her field experiences have opened up other avenues to help people through physical therapy, including home health and pediatrics.

“I really enjoyed the opportunity to go to people’s homes and get them out of their bed and moving,” she said. “You can see how important and impactful the therapy is for their recovery.”

Coming from a military family – mom, dad and her older brother all served – she also hasn’t completely ruled out a career in the Navy. But for now, she’s thrilled to continue building on all the knowledge, skills and real-world experiences she gained through her exercise science program.

“I have a solid foundation and I feel really prepared for this next part of my journey,” she said.