Lex Harvey, a freshman from Virginia, excited to pursue dream of becoming a director 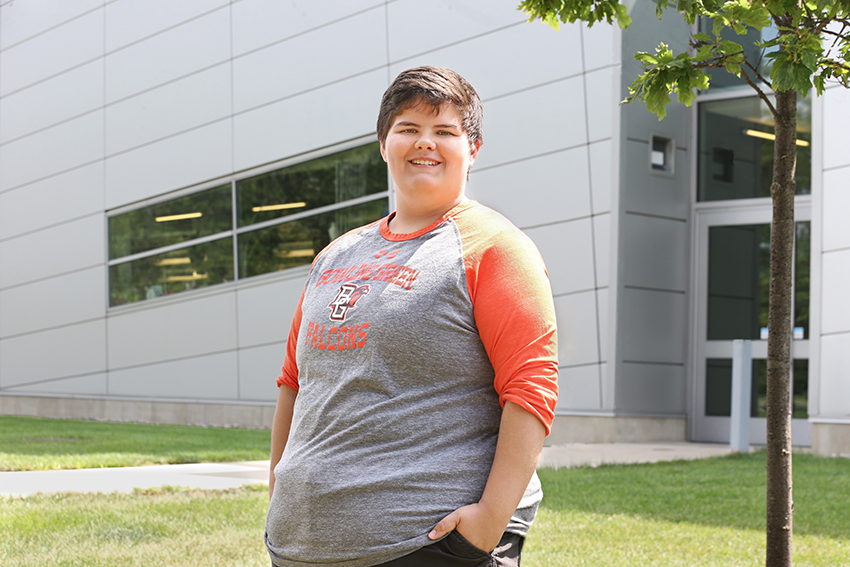 Lex Harvey dreams of becoming a director one day.

Harvey is a freshman at Bowling Green State University from Falls Church, Virginia, majoring in film with a specialization in film production.

“I’ve always planned on majoring in film production because it’s want I want to do for a living,” said Harvey, who chose BGSU over universities in California and Virginia. “I want to be a director and I want to work with TV shows and movies.”

“I’m looking to gain the skills necessary to pursue my dream of becoming a director and working in the film production field,” said Harvey, who also has a minor in marine and aquatic biology. “With the classes that I am taking I’m hoping to achieve that goal. Being able to have a steady job with internships over the summer, I will be able to go into the field I want to with the experience I need to hit the ground running in either L.A. or New York. I’ll be able to land a stable job because of the three internships I’ll be required to take during my time at BGSU.”

Another major contributor to Harvey enrolling at BGSU was his feeling of comfort here. His grandmother lives in Akron and during a visit to see her last year with his mother, they decided to drive across the state to visit BGSU.

The University also accepted him as a person, Harvey said.

“BGSU made me feel accepted for who I am because I am transgender and I go by male pronouns,” he said. “The fact that the University has gender-neutral housing and gender-neutral bathrooms, that was a big deal for me. BGSU also has places I can go as a person and express myself the way I want to, so that was another great thing about coming here.

Harvey is an avid sports fan, claiming the Montreal Canadiens as his favorite hockey team and the Green Bay Packers as his top football team. He’s excited to now include the Falcons among the teams he now will follow.

“I played football and I have played baseball,” he said. “I wanted to play hockey, but I don’t know how to ice skate so that’s one of the things I’m going to try to learn while I’m at BGSU. I’m going to try to attend as many of BGSU’s games as I can.”

Harvey said the Class of 2021 Facebook page assisted him in finding friends and communicating with his roommate before school started.

“It was very helpful. As soon as we found out we were accepted, we started a group chat and we would talk about what classes we were interested in taking and stuff like that,” he said. “People also posted their schedules and SOAR dates, and I was able to make a few friends, so that was pretty cool.”