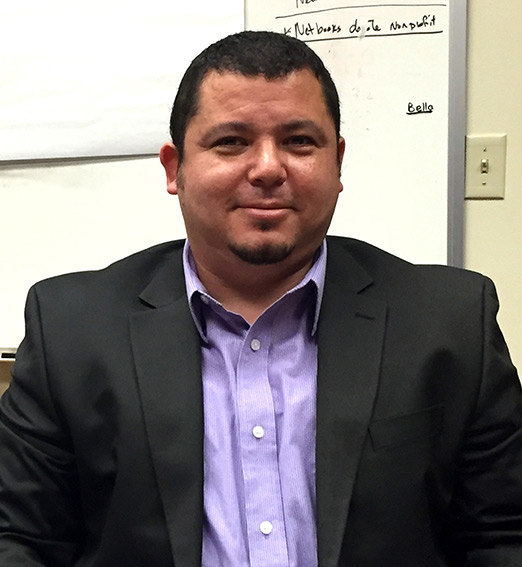 One of the first lessons Bowling Green State University alumnus Michael Hernandez learned when he became a principal was that you are always – 24/7 – a principal.

"We’re breaking down barriers," he said. "I’ve never shied away from conflict; I stand for what I believe."

As a result, Madison365 recently named Hernandez one of the 29 most powerful Latinos in Wisconsin. The website ranked him as No. 13 on the list highlighting Wisconsin residents of Latino heritage who have made an impact in business, education, government, media and the nonprofit sector.

Hernandez said the recognition was humbling.

"I don’t take it lightly," he said. "Now even more eyes are on me and what I do and how I do it. I won’t let down my family or my heritage."

Originally from outside Bowling Green, Hernandez was president of the National Honor Society and involved in Upward Bound, a program for low-income, first-generation students, at Lakota High School in Scott Township, near Kansas, Ohio. Despite offers from other Ohio universities, he chose BGSU, partially because of its size – not too big and not too small.

"I liked that you weren’t going to see the same people every single day, and that you could get to know a lot of people," he said. "And it is a strong education school; I always knew I wanted to be a teacher."

Hernandez was the first person in his family to go to college (his younger sister went later and eventually became the youngest associate dean in Ivy League history); education was not always the focus at home.

"I was fortunate enough to have a few really good high school teachers," he said. "They really pushed me. I thought being a teacher was a great way to give back."

Hernandez was involved in the Theta Chi fraternity and played intramural sports while at BGSU.

"It was a place in which you made some really lifelong friends," he said. "You had a lot of people looking out for you. It was one of the best things that ever happened to me; it’ll always have a special place for me."

One of the people looking out for him was his Upward Bound counselor, who recommended that Hernandez apply for an internship with the League of United Latin American Citizens. He was one of three students nationwide chosen for the internship at the Department of Education in Washington. While there, he took classes at Georgetown University.

"I didn’t think I had a chance," he said. "But I got to spend six months going to some major cities – Philadelphia, Baltimore, New York – talking to high school students about college life and the different doors it opened for me. It made me realize I wanted to go into an urban setting after graduation."

"They learned in spite of me," he said. "They were just super smart kids. I took more enjoyment in the reading class I taught. If I did a good job, I saw some good things. It really inspired me."

He then got his master’s in special education (he later earned two more master’s degrees and is working on a doctoral degree). But after a student committed suicide, the 22-year-old Hernandez took it hard.

"I drove down to BG to meet some friends and ran into people going to a teaching fair," he said. "I went with them and got four or five job offers right away."

He took a job outside Los Angeles, where he taught for six years. He’s now been a principal for 15 years.

"I got into teaching because I wanted to make a difference; I didn’t know what to expect," Hernandez said. "I was fortunate enough to be placed in some urban areas with some really good mentors to be a better teacher and a better person. That’s what I’m trying to do now."

Madison East High School is one of the most diverse schools in Wisconsin and a focal point of Madison's eastside community. When Hernandez first became principal, it was among the bottom five percent in the state.

"We are doing good things," he said. "We’ve redesigned the schedule so it is equitable; created a food pantry; built partnerships with different agencies; created safe spaces for kids in need; provided professional attire for prom and job interviews."

Approximately 100 students in Hernandez’s school are homeless. Others face social and emotional challenges, some of which are impacted by the pressures kids feel from social media and cell phones.

Hernandez and his wife, who is a teacher, have three children. Once they are all in college – which he considers a key to wherever you want to go – he may look for opportunities as a superintendent.

"I also desperately miss teaching," he said. "I’d like to teach at the university level at some point, but that work can wait. There’s a ton of work I want to see accomplished here.

"I know that the impact of a few adults in my life helped get me to where I am. When students come back and I get to see them as young adults, that’s some serious stuff; that’s cool by my end."