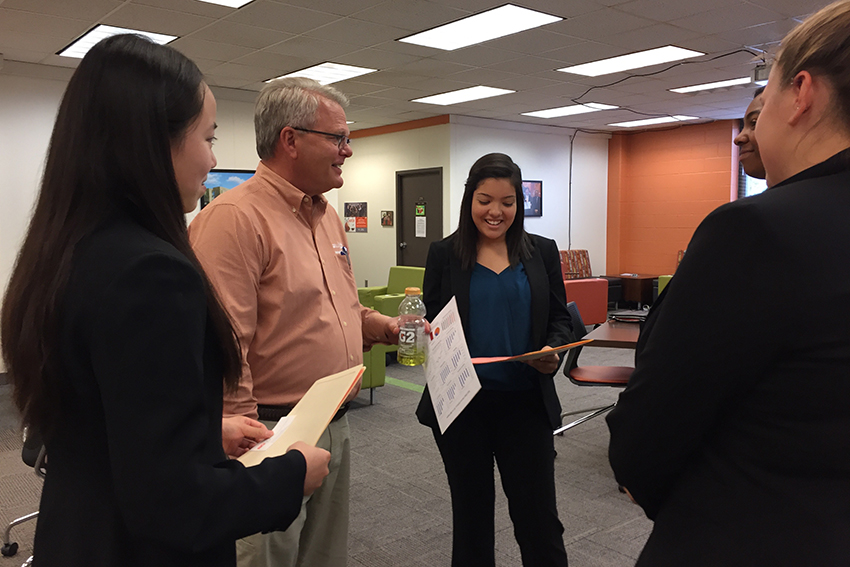 When Hazel Ibarra’s business teacher recommended a Young Women in Business Leadership camp at Bowling Green State University, she was excited and hopeful that her friend Martha Paz could attend with her.

There was just one challenge: Ibarra and Paz were in Little Elm, Texas, some 1,000 miles southwest of Bowling Green.

“It was a 17-hour drive,” Ibarra said. “My dad offered to drive us, so we left at 5 p.m. on Saturday, spent the night in Little Rock, and drove the rest of the way on Sunday.”

It was both women’s first trip to Ohio.

“We were looking at the map and saw that it was by one of the Great Lakes, and we thought that was interesting,” Paz said. “Other things are different that we didn’t expect – no one here says y’all, and you say pop instead of soda. Plus, compared to where we live, it’s nice and cool.”

Ibarra and Paz joined 18 other young women who stayed on campus for the weeklong camp. Experts from BGSU’s internationally recognized College of Business coached campers on the skills needed for today’s college and professional world, with highlights on entrepreneurship, speed interviewing and business dining etiquette.

“I liked the sessions on creating my personal brand and learning how to network,” Ibarra said.

Paz agreed, but said her favorite session was about becoming an entrepreneur. “I love how Kirk [Kern] taught that project.”

The entrepreneurship session utilized BGSU’s Hamilton Center for Entrepreneurial Leadership, one of just 20 in the world recognized by the Association to Advance Collegiate Schools of Business. Additional sessions focused on personal branding, elevator speeches and networking.

Ibarra and Paz were not the only women who traveled several hours for the sold-out camp. Ellen Padgett flew from Rhinelander, Wisconsin, about 600 miles northwest of Bowling Green.

“I visited BGSU last year and got a flier about the camp,” Padgett said. “I have family who live in the area, and they said this is a really good school.”

Padgett said the week’s sessions helped her analyze her college and career plans.

“I thought I wanted to go into marketing, but now, after this camp, I’m thinking about management instead,” she said

Staying in a University residence hall all week and touring the campus helped Padgett and other campers familiarize themselves with BGSU, but she said the hands-on business sessions were her favorites.

“I learned so much," she said. "Before camp, I had no idea what an elevator speech was. And I was so nervous at first about the speed interviewing, but after the first one I really liked it.”

Padgett has toured several other colleges but the week at BGSU, she said, has convinced her that she wants to be a Falcon.

“This has been a great camp, and I met a lot of people." she said. "If I do end up coming here, I’ll already know people because of everyone I met at camp.”