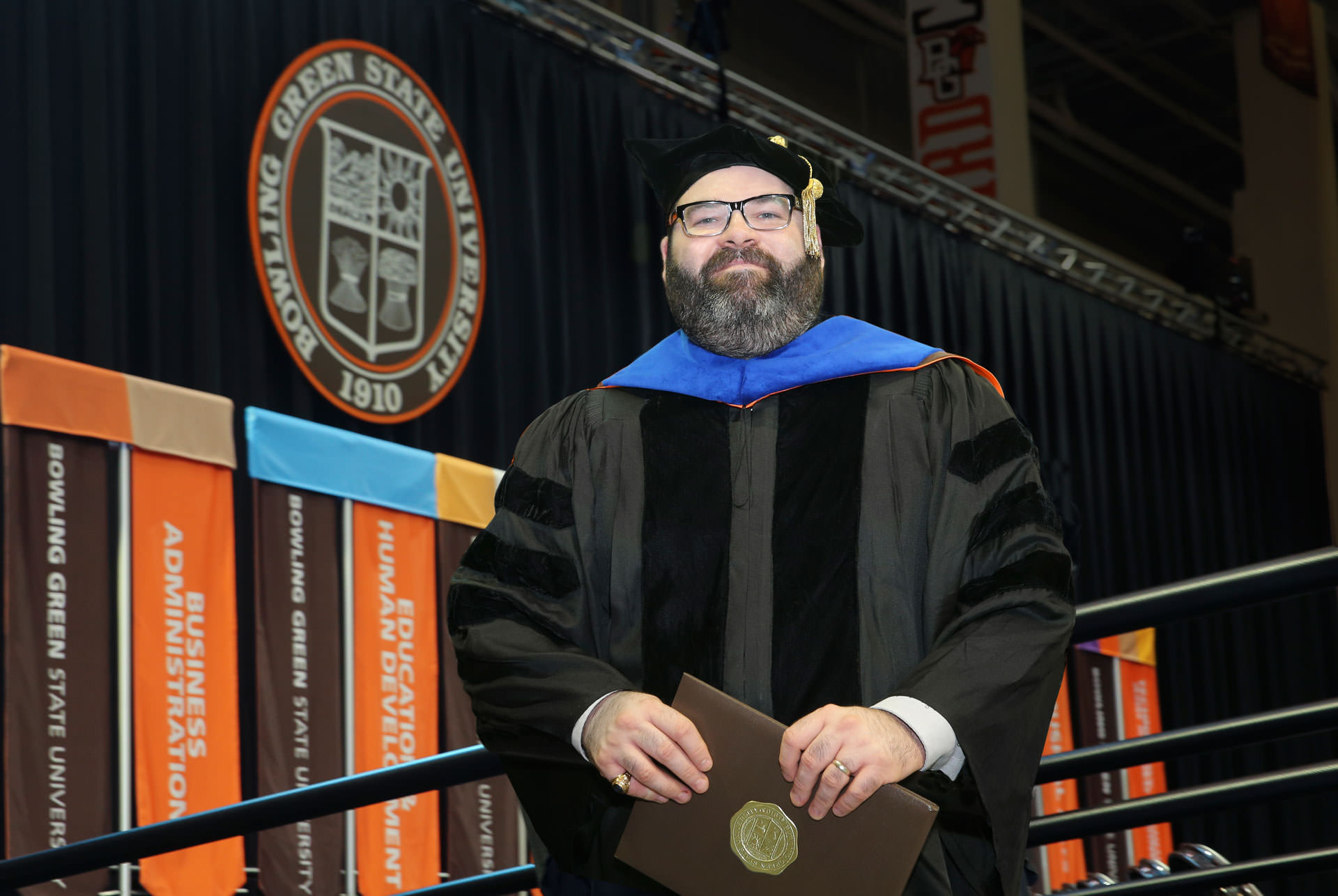 Earning doctoral degree is a family tradition for Christopher Wagenheim

Christopher Wagenheim asked permission from the president’s office to wear regalia that differed from the rest of Bowling Green State University’s Class of 2017. Not only were his robe and tam black instead of the traditional BGSU brown, they also are family heirlooms.

Wagenheim wore the regalia, which originally belonged to his late father, George, during commencement May 5 when he earned his Ph.D. in American Cultural Studies with a specialization in film and media studies.

“My dad’s regalia is black, and the gown comes from Michigan State and the cap my mom bought him as a graduation gift,” Wagenheim said. “My brother, Matt, had been using the regalia at Ferris State, where he is a professor, and was wearing it for each commencement he had to go to. When he found out I was graduating from BGSU, he sent them to me and said the next person who graduates, you have to pass them on down. We’re keeping it in the family.”

A patch is sewn on the inside of the Wagenheims’ gown that has their names and year they earned their doctoral degrees. The patch is big enough for future generations of the Wagenheim family to carry on the ritual.

“It’s a pretty cool family tradition,” said Wagenheim, who recently finished the school year as visiting professor at Hartwick College in Oneonta, New York. “My two nephews are thinking about going to graduate school, so I might have to have hand over the regalia sooner rather than later.”

BGSU’s reputation for having one of the top popular culture studies programs in the country was a big attraction for Wagenheim, who also was a graduate student instructor at the University.

“I take an analytical approach to examining popular culture and film and television and comic books, that sort of thing, and BGSU came highly recommended,” he said. “I had a fantastic education from BGSU, and we had great faculty.

“Bowling Green is a great place. The faculty always had a great attitude of when you get your doctorate, not if you get it, which I thought was really nice. I took all my classes on campus, and I taught all four years I was there as well.”

His long-term goal is to get a tenure-tract position at a university because education is going to be his “lifelong career objective.”