University only institution in Ohio to be awarded 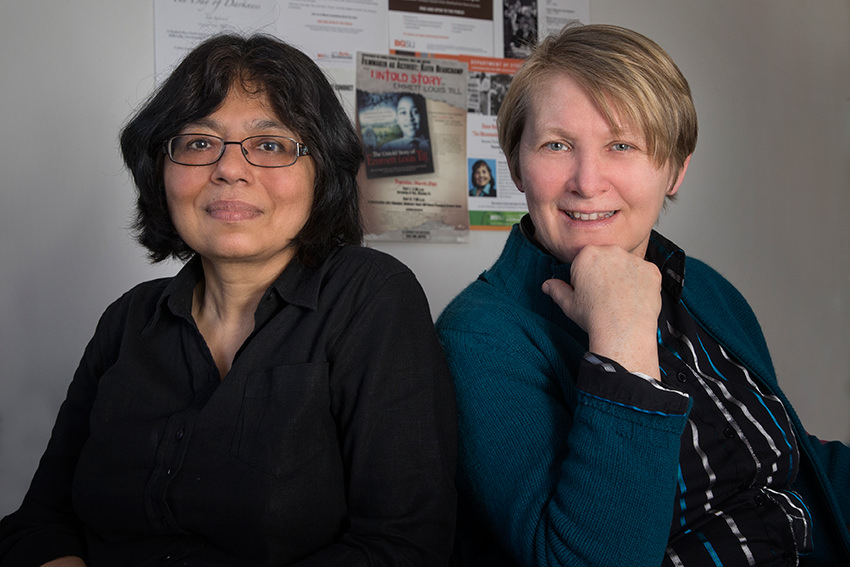 The movement of people from place to place is centuries old. As part of human history, migration is integral to the story of the human race and modern society.

Bowling Green State University has been awarded major funding under a new grant from the National Endowment for the Humanities. “Understanding Migration: Local and Global Perspectives,” co-authored by Dr. Christina Guenther, world languages and cultures, and Dr. Vibha Bhalla, ethnic studies, has been funded for the full amount of $100,000. The new Humanities Connections grant is designed to encourage undergraduate students across the country to develop the intellectual skills and habits of mind that the humanities cultivate. In this first round of grant awards, BGSU was the only recipient in Ohio.

The grant provides for professional development for faculty members this summer to design four new one-credit “1910” freshman seminar classes offered in the fall: “Immigrant Ohio in the 21st Century,” “Changing Faces of Europe: Contemporary Voices of Migration,” “The Great Migration,” and “Searching for Memories: Mexican (Im)Migration to Northwest Ohio.”

The four seminars will then be expanded into general education courses and may qualify students for a Migration Studies certificate for those who complete all four.

A second set of courses will be developed and launched in fall 2018. Topics may include “Transnational Ohio,” “Negotiating the Mediterranean: France and North Africa,” and “Contemporary African Migration to the U.S.”

Also supported by the grant will be BGSU’s third annual “Immigrant Ohio” symposium in fall 2017, and a community film festival on the topic of migration.

BGSU faculty have been studying migration for years, and in 2015, Bhalla organized the first “Immigrant Ohio” event to mark the 50th anniversary of the U.S. Immigration and Naturalization Act. Around the same time, Guenther organized a research cluster in which faculty members from various disciplines draw on historical, literary and socio-cultural approaches in migration studies. The grant proposal grew out of that cluster.

“We thought that we could do something in migration studies that’s very different, that involves the humanities in the broadest sense and goes across many disciplines,” Gunther said.

The research cluster is housed under the BGSU Institute for the Study of Culture and Society, a humanities hub that serves as an incubator for research and teaching.

“We have a very engaged group of scholars across many disciplines who have been addressing the issue of migration for some time,” said Dr. Raymond Craig, dean of the College of Arts and Sciences. “Faculty in our college have a history of receiving NEH grants, and this latest initiative underscores their commitment to global issues and the public good.”

The new curricula made possible by the grant seeks to reframe the way students understand identity, community and society.

“More than 80 percent of our undergraduate students are Ohio-born and Caucasian,” Bhalla said. “We want them to understand that the making of America has involved many different groups, and it’s happening still. Why, for example, did African-Americans migrate to Cleveland, Cincinnati, Youngstown; what are the cultural contributions and how did they affect those areas? Similarly, what have been the effects of Mexican Americans coming to our area in the last half century?”

As anti-immigration sentiment in nations with large migrant populations has seen an increase, it is important to understand the effects of migration: social, political, economic and environmental.

“Migration has become ever more urgent in Europe since the fall of the Berlin Wall,” Guenther said. “In the past two years, more than a million Syrian refugees have gone to Germany. There has been political upheaval in the Middle East, and environmental problems in other parts of the world have forced people to move. The situation in Africa is immense. It’s a very rich mosaic we’re weaving as a world culture.”

As the status of the humanities is called into question, “Understanding Migration” will be a vehicle for students and faculty to reflect on culture and identity.

“This work will foster curricular innovation and build on our efforts to make the global challenge and opportunity of migration a new focal point of interdisciplinary teaching and scholarship in our college,” Craig said. “Given the competitiveness of National Endowment for the Humanities programs, this is a significant accomplishment that will help our undergraduate students develop critical thinking skills for engaged citizenship in a multicultural world.”

Note: In 2015, BGSU’s first “Immigrant Ohio” symposium marked the 50th anniversary of the U.S. Immigration and Naturalization Act. The theme of the following year was human trafficking, and 2017’s event, to be held Nov. 16, will focus on refugees in Ohio. It will feature an installation by video ethnographer Tariq Tarey of refugees from Somalia, Nepal and Bhutan.