“Thirty-eight days till the premiere,” Conor Mutter reminded the crew of “Well Born” at a recent meeting in the Wolfe Center for the Arts before the group fanned out for the start of the day’s work. Now in its third semester, the current Studio Experience class was coming down to the wire and into post-production work.

Editor Brandon Beining“We’re actually in pretty good shape, time-wise,” Ostrowski told the class. “Our premiere is at 7 p.m. on April 28 in the Donnell Theatre at the Wolfe Center. I think we’re now in the 16th draft of our short screenplay,” a futuristic science fiction story of eugenics and the aim to create a master race. “Today we’re shooting background plates for the green screen images for the hallucination scene and the virtual window and working on our dolly shots.”

Then the class dispersed to their respective tasks: Matthew Henkes, Keisha Martin and Emily Bishop-Bosu to the dolly shots where they patiently practiced coordinating the moves and angles needed to capture a smooth glide and sharp focus of the camera; and Mutter to keep things progressing on schedule. On the second floor, editor Brandon Beining was back in the editing suite, assisted by Chelsea Deak and Quinton Wilhite. Once they reach “picture lock,” where the shots and scenes are reliably in place to create the narrative, the work of the special effects and sound teams can begin to be added to the film. Outside the editing room, visual effects crew Taylor Johnson, Diane Hoffman and Zak Goldinger, the head special effects person on the movie, set up the large green fabric screen against which the special effects would be projected.

Johnson, now in her third semester with the Studio Experience, plans a career directing video games, which use motion capture. “It’s the same technique as we use with real actors,” she said, “So this teaches me what I need to know about how it’s done.”

Meanwhile, the sound crew prepared to rerecord some of the Foley sound for the hallucination scene, and the publicity team continued its work on developing press releases, posters and other materials.

The Studio Experience class offers BGSU students in film production the opportunity to take part in making a short film, and to play a variety of roles over the course of its three semesters, from pre-production to production to post-production. Students may take the class up to six times, taking on different jobs. For example, the eventual camera crew can learn the craft during pre-production, training on the 16mm equipment and serving as first assistant camera, second assistant camera or camera operator, and then eventually in a set position during principal photography supervised by the director of photography.

“Film faculty members rotate writing and directing the films, which are interdepartmental productions with the theatre scene shop and costume shop,” Ostrowski said. “We try to make it as much like a union shoot as we can. Students must interview for particular roles and present resumes and cover letters so that it gives them the professional experience. They apply the experience they’re gaining in the actual production. We give them a ‘virtual toolbox’ to take with them.

“By learning a variety of skills in film production, the students gain a more thorough understanding of the entire process and all the roles,” Ostrowski said. The class also offers variable credits so that students can work in as much or as little as they can manage.

The Studio Experience is devoted to production. None of the students in the class acted in the film, which is the typical scenario, Ostrowski said.

Instead, playing the lead roles in “Well Born” are Dr. Cynthia Stroud, who recently received her Ph.D. from BGSU and is now an adjunct instructor; two current students, junior Sarah Drummer and senior Mackenzie Baumhower; and local chiropractor David Engle, in the antagonist role of the president controlling the world.

Carlie Merlo, a junior from Columbiana, Ohio, majoring in film production, has been with the film all three semesters and even came in during the summer for the read-throughs with the actors. She is intensely focused on working toward a career in film and is hyper-organized, a necessary skill in her desired field.

“My goal is to work as a first assistant director or script supervisor,” she said, “and long-term to be in New York, where there’s a good independent artist scene. I’ve applied for internships in New York and L.A. To be admitted into the guilds or societies, you have to log a certain number of hours in productions, so I also volunteer on as many student productions as I can. Once you do a job and do it well, people pick up on that and will come to you and ask you to work on their films. Daniel Williams was director of photography on ‘Well Born’ and from working closely with him I have learned a lot. I was also in Thomas Castillo’s Studio Experience class.

“I’ve learned that to be successful, you have to assess the creative vision of the director and try to stay with that. Also their working style: how many shots do they expect to get in a day? They all have different things to say as mentors and as individual artists, so you have to know your director’s style. You also gain the equipment knowledge and scheduling, how to do floor and light diagrams and set up overheads. 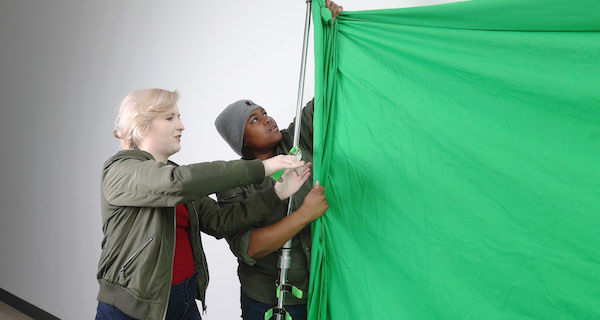 Diane Hoffman (left) and Taylor Johnson (right) set up the green screen“There’s also a lot to teach yourself. I read a lot about how different software works, and management and budgeting, and many other things.”

With all this going on in addition to her classes, Merlo has to be extraordinarily organized, as do the other students. “My entire life is color-coded,” she joked.

Beining is also balancing a number of life roles. An employee of Buckeye Cable’s BCSN sports network, he works as a one-man team filming and editing coverage of local sporting events and already has two associate degrees, in web design and 3D animation. He transferred to BGSU from Terra Community College when he decided on a career in film production and brings technical skills he gained there directing and editing a documentary on a local musician, among other projects, along with skills from his BCSN job. Now a BGSU junior, in last fall’s Studio Experience semester he served as a set dresser, a very different experience from editing, he said.

Like Merlo, he said it is important to “keep in mind the director’s vision,” and he works extremely closely with Ostrowski, meeting almost daily. “He’s an inspiration to me,” Beining said. “He’s very passionate about how he wants it to end up and he has a particular vision for it.” But Beining also enjoys the freedom to present his ideas to the director and the meeting of creative minds, as well as the impact editing can have. “It’s an interesting position to hold. An edit can completely change the feel of a scene,” he said.

Beining is also nearly finished editing a short, 16mm film of his own that will premiere this month. “Luke Ostrowki is the first person I go to when I have an idea,” he said. “He’s provided a lot of feedback on it. I’m extremely excited and thrilled with how it far it’s come and I’m ready to see what my peers think.”

Beining is also writing an independent short film to be made next year. “I want to make the best and most ambitious short film I can.”

It’s not unusual for students to step in to multiple roles in a production. Bishop-Bosu, who was working on the dolly crew, is also on the behind-the-scenes crew, gathering footage from each department for the “making of” documentary about the film. The marketing team for “Well Born” is creating posters and press releases, and conducting interviews for press materials. Henkes is the head of the marketing team this semester but served as first assistant cameraman in pre-production and principal photography during the production semester, experience that led to his operating the camera to establish the settings during the practice for the dolly shots.

Part of the appeal of the class is that students can bring their particular interests to bear. Marketing team member Natasha Fly, a senior who transferred from Lorain County Community College, is creating content for social media, press releases and the film’s website.

“I really enjoy the research and writing aspect of it,” she said. “If you plan well, the risk of making a mistake goes down. I’ve discovered new interests and I’d like to bring to light women in history through documentary films.”

Women in film production often do not have an easy go of it, Merlo said. In fact, as her Honors project she is planning a documentary exploring sexism in the arts, particularly the technical side of film. “I want to discuss this culture we have where women often don’t even realize it’s happening.”

As the production nears its premiere, Mutter, a senior who has been involved two semesters with “Well Born,” looks forward to working professionally in unit production as a line production manager on feature film sets. He has been involved in student film since he was in high school and loves “seeing the process unfold.”

Being responsible for making sure each department is doing what it should be doing at the proper time, he said, “can be a bit like herding cats and trying to funnel them all in one direction, and each style of film — feature films, documentaries — presents its own challenges. But we’re building a world that’s not our own, and collaboration is at the heart of this process. This army of people comes together in a short time to create something special. I guess that’s the movie magic.”