Reaching out, growing within 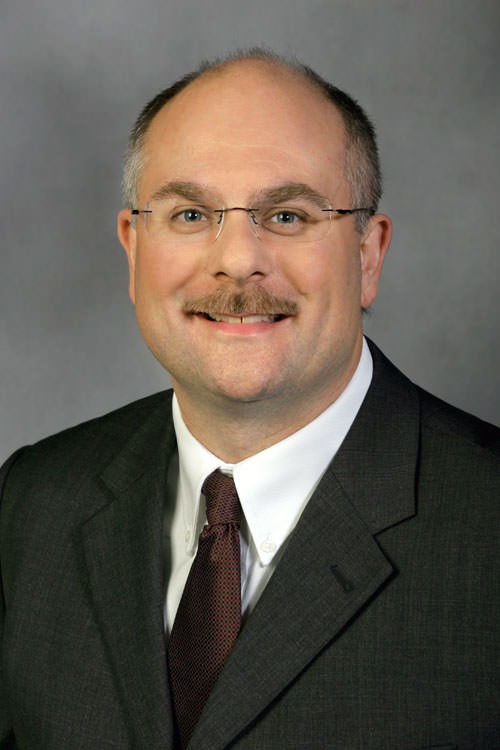 Dr. Brett Holden, theatre and film, has fully captured the essence of “service-learning” in his teaching and his co-curricular activities. As a true believer in the equal and complementary value of both service and learning, he has woven service into his literature and film courses in such a way that students are engaged to apply what they are learning in the classroom to real-world issues off campus — specifically, the challenges of veterans and active-duty service people and their families.

His dedication to serving the needs of these populations while educating a new generation of citizens about the realities of war and military service has earned him the David Hoch Memorial Award for Excellence in Service. The award was presented by Ohio Campus Compact, a nonprofit membership organization of 42 Ohio colleges and universities working to promote and develop the civic purposes of higher education. The Hoch award honors the outstanding work in service-learning and/or civic engagement by a faculty or staff member at an Ohio Campus Compact member institution.

The Hoch award is the latest in a number of recognitions Holden has received for his work with military service people and the agencies that support them. He has used his position at Bowling Green State University to make students, faculty and staff more aware of both the contributions and the needs of those who have served their country while giving service members an outlet for sharing their experience.

Holden’s engagement with service-learning goes back many years. He was among the founding faculty of BGSU’s inaugural living/learning community, Chapman, whose philosophy was based in a coherent, cohesive curriculum that included service as part of its core. Chapman became a model for many other living/learning communities in the nation.

Before joining the Department of Theatre and Film in 2008, Holden was deeply engaged with veteran issues through war-literature and war-film courses of his own design in the Chapman Learning Community.

“As a natural offshoot of my courses, I developed the Veteran Assessment and Service Team (VAST), a student organization that engaged students in direct service to veterans and military families,” he said. “After joining the department, I transitioned these experiences into two solid service-learning courses I have offered for many years: War, Film, and the Soldier Experience and Iraq War Cinema. Students in these courses not only examine popular portrayals of military service, U.S. service personnel, and military families, but take part in on-site service to these individuals and their respective branches of the military in order to more fully understand why images relating to these branches and individuals tend to be so negative and harmful to these populations. Service projects have varied from driving veterans for Honor Flight of Northwest Ohio, assisting our local National Guard’s Family Readiness Groups, and engaging in an equine therapy program.”

His work has earned him gratitude and recognition from numerous community partners, along with several awards. Therese Sadowski, Yellow Ribbon Support Specialist with the Air National Guard, has worked with Holden and his students for two years. As the event coordinator for the program’s reintegration program to promote the well-being of National Guard and Air Reserve Service members and their families, she said Holden reaches out to the organization for opportunities to enhance students’ class experience while also lending a helping hand.

“His objective is always to help his students gain a better understanding of military service personnel and to break down the negative image of those who have been deployed as often portrayed in Hollywood films,” she wrote in recommending Holden for the Hoch Award. “Dr. Holden is remarkable; he is genuinely interested in learning about the challenges of deployment and reintegration of the families. He exudes professionalism and executes an amazing sense of urgency whenever involved with our program. …. Dr. Holden’s passion and sincerity shine through every time I interact with him. We could find no better advocate for our program!”

Students appreciate his commitment as well. Senior Matthew Henkes, a film production major, has taken several classes with Holden and worked on numerous service projects. As a filmmaker, he said, the classes have challenged him to analyze any preconceived notions and have pushed him to research thoroughly the stories and characters he wants to represent.

“Dr. Holden’s commitment to educating students through community-based learning pedagogy is inspiring, and has deepened my connection to not only the academic material but to the northwest Ohio region,” he wrote in support of Holden’s nomination. “The environment and culture of learning that Dr. Holden is able to create has expanded my critical thinking ability and has inspired me to make connections between academic material and my personal experiences I never would have been able to see before.”

That is Holden’s goal.

“As a faculty member, I feel that it is my duty to help develop engaged, principled BGSU graduates who can immediately engage in working on behalf of others,” he said. “I have always held that while my passion is working with military veterans and their families, my students develop a transferable skill set that could just as easily prepare them to work on behalf of the homeless, of cancer survivors and caregivers, of environmental groups or a variety of other volunteer organizations.”