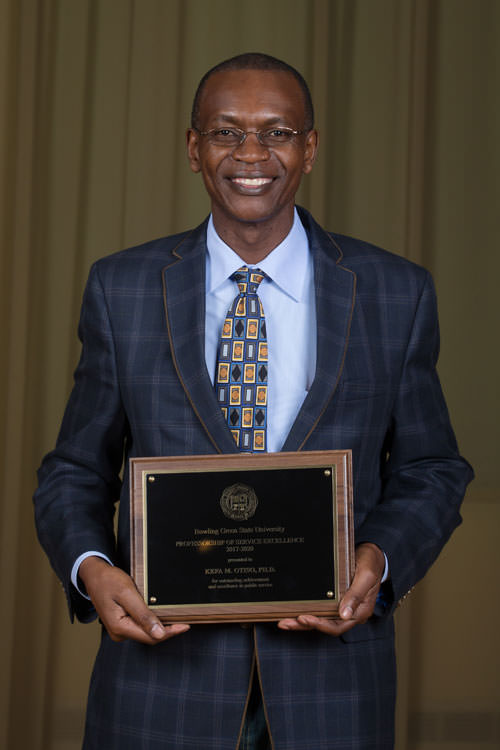 Throughout his career, Dr. Kefa Otiso, an urban geographer, has applied his academic expertise, life experience and professional skills to making life better for others. The University recognized his dedication to his discipline, the profession, the University and the larger community by naming him a Professor of Service Excellence. The title was bestowed at the Faculty Excellence Awards on April 13.

The title of Professor of Service Excellence is conferred upon members of the faculty who have established national and international recognition through professional service, public service and/or external engagement through their work at the University. The title is awarded for three years and includes an annual stipend of $5,000, $2,000 of which will go toward professional development.

“Professor Otiso has performed yeoman’s service across various governance bodies at the University across his tenure here,” wrote Dr. Raymond Craig, dean of the College of Arts and Sciences, in support of Otiso’s nomination for the professorship. “His continued service to broaden our students’ engagement with diverse other people has been consistent and excellent.”

Otiso joined the BGSU faculty in 1999 as a faculty member in geography, which is now part of the School of Earth, Environment and Society. He has continuously provided service toward BGSU’s governance, operation, policy formulation, and/or curriculum development at the departmental, school, college and university levels. In addition to his own departmental service, has also been a member of the Faculty Advisory Committees for the International Studies and Africana Studies programs.

Since 2010 he has been director of the Global Village Learning Community, which brings together international and American students of all majors and class standings, and, since 2015, has served on the Provost’s International Student Experience Committee.

“These two activities, one directly engaging students and the other in a policy-level capacity, are both crucial to our students’ sense of international cultures and opportunities,” according to Craig.

His service on and off campus has allowed him, and by extension, the University, to have both local and global impact. Thanks to his initiative, BGSU has effectively become a nexus for Kenyan studies in the United States. Otiso is the founding and current president of the Kenya Scholars and Studies Association (KESSA), whose mission is “advancing scholarly, scientific, and research work on the Republic of Kenya.” KESSA has been based at BGSU since its inception in 2008 and has grown to nearly 300 members. It has become the premier association of Kenyan/Kenyanist academics outside of Kenya. Besides promoting scholarship on Kenya, the association has effectively made BGSU the nexus of Kenyan Studies in the United States. In the first six years of its existence, KESSA held its annual international conferences at BGSU. In the process, it gave BGSU students and faculty a cost-effective research outlet as well as an avenue for learning more about Kenya and the broader African continent. It also helped to market BGSU nationally and abroad; the University has over the years educated one of the highest numbers of Kenyan students in the U.S.

Otiso was able to render service to his native Kenya directly when, in 2015 and 2016, respectively, he won the Inaugural Carnegie African Diaspora Fellowship Program (CADFP) and the Carnegie African Diaspora Alumni Fellowship Program awards to engage in summer geographic research, curriculum development, and graduate student training and mentoring at Kisii University in Kenya. During his 2015 CADFP fellowship, he initiated a BGSU-Kisii University Memorandum of Understanding that is likely to create additional research and study abroad opportunities in Kenya for BGSU faculty and students.

He was asked to serve as a peer reviewer for the Carnegie African Diaspora Fellowship Program in 2016 and 2017. During his 2015 and 2016 CADFP fellowships, he also engaged in high-level negotiations with Kenyan government officials that could eventually lead to the creation of Kenya’s own CADFP-like program that could enable the skilled global Kenyan diaspora to play a stronger role in the Kenya’s educational and socioeconomic development. This engagement builds on his past scholarly work on the role of the diaspora in national development.

From June 2008 to June 2012, he served as associate editor and editor of the African Geographical Review (AGR), a major African geography journal. During his tenure the journal grew enough to be acquired by the prestigious T&F publishing group, which also publishes the Annals of the American Association of Geographers. Besides being a current AGR editorial board member, he has used this journal as an outlet for his work on African urban and economic development.

His service as a reviewer and on editorial boards has led to important connections. His experience as an Inaugural Washington Fellowship (now Mandela Washington Fellowship for Young African Leaders MWF-YALI)) application reviewer is partly responsible for BGSU’s recent success in applying for a 2017 MWF YALI Summer Civic Leadership Institute that would, for the first time, bring 25 YALI fellows to BGSU this summer for a six-week training program. Since YALI fellows are drawn from many African countries, this program is likely to contribute to BGSU’s current and future African footprint in significant ways.

Otiso is also involved in two community service initiatives. He works with Welcome Toledo-Lucas County to improve northwest Ohio’s ability to attract and retain highly skilled immigrants that are increasingly critical to maintaining U.S./Rustbelt cities/regions’ global economic growth and competitiveness. Last fall, he gave a presentation on “Welcome Toledo-Lucas County and Northwest Ohio's Quest for the Immigrant Pie” at the Race, Ethnicity, and Place Conference VIII at Kent State University, and this year is working with Welcome TLC’s Workforce Development committee to further advance this initiative that will also enhance BGSU’s local, national, and global community stature.

This service is in line with his urban and economic geography research on processes of African and U.S. urban economic growth, globalization and international migration.

He also helps lead the ongoing mobilization of the Kenyan diaspora in the United States, an effort that, together with helping to create KESSA, culminated in his being awarded one of the Republic of Kenya's highest civilian honors, the Elder of the Order of the Burning Spear, presented to him at a BGSU ceremony in May 2009.