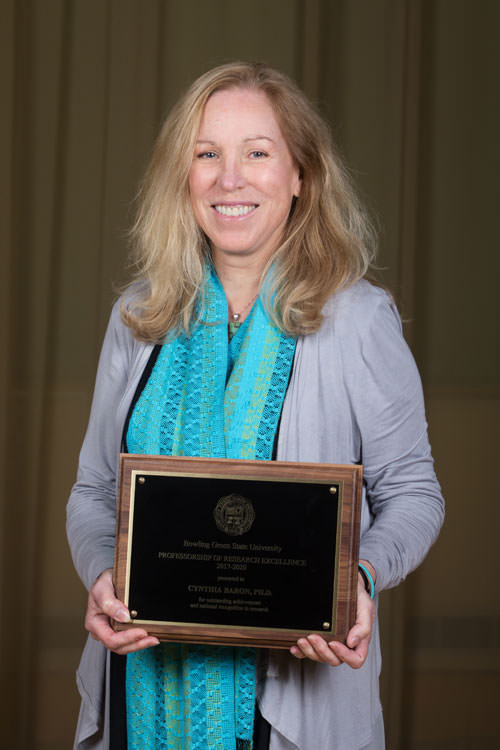 From the phenomenon of food in film to the history of modern acting, Dr. Cynthia Baron has pursued her love of cinema through scholarly research and writing. Internationally recognized for her scholarship and widely cited, she has made significant contributions to the body of knowledge about the art form over the course of her career, particularly in the areas of acting and stardom.

Baron was named a Professor of Research Excellence at the Faculty Excellence Awards April 13. The professorship recognizes members of the faculty holding the rank of professor who have established outstanding national and international recognition through research and publishing in their disciplines. The title is conferred for three years and brings additional financial support for its duration.

Always a highly productive scholar, Baron in the three years since attaining the rank of full professor has amassed an extraordinary record. She has published three books, three refereed journal articles, three refereed book chapters and a comprehensive bibliographic entry on screen acting. In addition to her writing, in the last three years she has presented four refereed conference presentations and a keynote address at a conference held at Fordham University.

After joining the BGSU theatre and film faculty in 1999, she published two widely recognized books: “Reframing Screen Performance” (2008), co-authored with Sharon Carnicke, and the co-edited anthology “More Than a Method: Trends and Traditions in Contemporary Film Performance” (2004).

Her work represents may years of in-depth research and study and continues unabated, with another book under contract and additional chapters to be published in upcoming anthologies.

In 2013, she became the founding editor of the Palgrave Studies in Screen Industries and Performance series. Since 2008, she has taken a leadership role in all aspects of review and production as the editor of The Projector: A Journal on Film, Media, and Culture, a peer-reviewed journal with an international editorial board. Since 2005, she has served on the editorial board of the Journal of Film and Video, the official journal of the University Film and Video Association, and is co-chair of the Society for Cinema and Media Studies Women’s Caucus.

However, it is not only the amount but the quality of her scholarship that has earned her accolades from academics and cinema scholars around the world.

As Dennis Bingham, director of film studies at Indiana University and a leading scholar in the areas of star studies and biographical film, wrote in supporting her nomination for the Professorship of Research Excellence, “Cynthia Baron’s research is wide-ranging, exciting and significant. Baron is one of very few film scholars whose career has been devoted, in large part, to the study of film acting. Her work is informed by cultural studies and historical research. She is also strongly concerned with the role of acting in production and especially production history, combining it with an analysis of acting and cinematic elements. This integrated methodology, which may sound essential, is rarer than one might think.”

Her most recent book, “Modern Acting: The Lost Chapter of American Film and Theatre” (Palgrave, 2016), represents 25 years of research grounded in archival materials housed in libraries across the country. In her endorsement of the book, Rosemary Malague, director of the Theatre Arts Program at the University of Pennsylvania, wrote: “‘Modern Acting’ offers a valuable new and expansive history of American acting theory and practice. Moving beyond ‘the Method,’ Cynthia Baron identifies an alternative theatrical ‘throughline,’ tracing modern acting from stage to screen, coast to coast, and past to present, while meaningfully illuminating the contributions of ‘lost’ practitioners and institutions.”

Baron was invited by the British Film Institute to write about Denzel Washington for its Film Stars book series. Her “wide-ranging knowledge of acting traditions and her astute analytical readings of screen actors’ performances suggested she would be the perfect candidate,” wrote series co-editor Martin Shingler, senior lecturer in film and radio studies at the University of Sunderland in England. The book examines the complex relationships between African-American and predominantly white Hollywood cinema, the dynamics of cross-over stars, censorship policies on representations of race, the different dimensions of Washington’s evolving career, and ways in which Washington’s vocal and physical choices inform audience responses to the characters he portrays. Baron’s “brilliant insights were articulated with great clarity, making this not only a provocative and groundbreaking study, but also a highly accessible one,” Shingler said.

As Shingler said, Baron’s groundbreaking work is provocative and challenges other scholars to think deeply and venture beyond the established disciplinary boundaries.