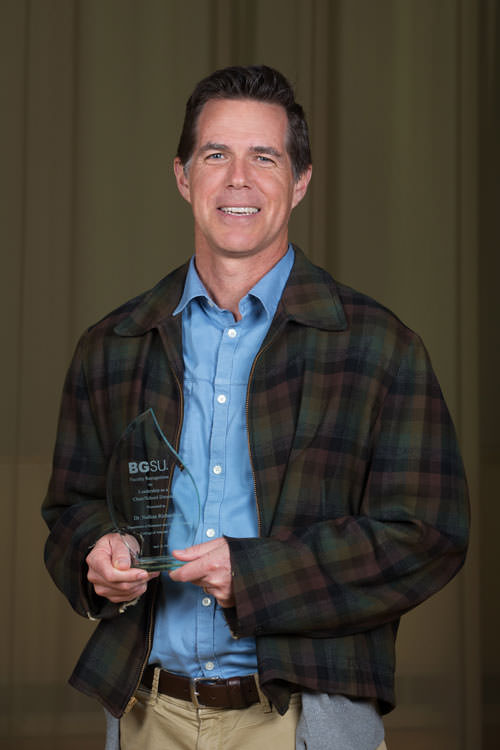 Dr. Nathan Richardson, chair of the Department of Romance and Classical Studies, received this year’s Faculty Senate recognition for Chair/School Director Leadership. He was honored at the Faculty Excellence Awards April 13 where he received $1,000 and an engraved plaque.

“Dr. Richardson’s leadership can be credited with paving the way for this notably collegial merger,” wrote nominator Dr. Amy Robinson.

Drs. Philip Peek and Deborah Schocket echoed that sentiment in a letter of support: “His calmness, resolve and integrity have kept his crew’s emotions in check, and his decision-making has not only kept the ship afloat, but placed the ship in as tight a shape as it has ever seen.”

Richardson joined the BGSU faculty in 1999, has served as chair since 2009, published his second scholarly book in 2011 and was promoted to full professor in 2012.

“Dr. Richardson is one of the most accomplished faculty members in the department in all areas, making him an ideal leader and role model over the years,” Robinson continued. “He is also steadfast in his support for and participation in the little things that keep a department vibrant, including preview day, graduation ceremonies and student mentorship.”

Richardson’s leadership can be seen in the complete overhaul of the undergraduate curriculum in Spanish and French to align objectives with standards of the Modern Language Association; the expansion of online options, which has led to a significant increase in nontraditional student enrollment at the graduate level; and the enhancement of the study-abroad curriculum to include internship opportunities that appeal to students beyond those in world language tracks.

“The department enjoys a very healthy culture that promotes productivity and excellence among its members,” Peek and Schocket added. “Nathan, as head, is in large part responsible for its health. He communicates well and provides positive encouragement, thoughtful advice and constructive criticism.”