‘Action Today for a Better Tomorrow’ 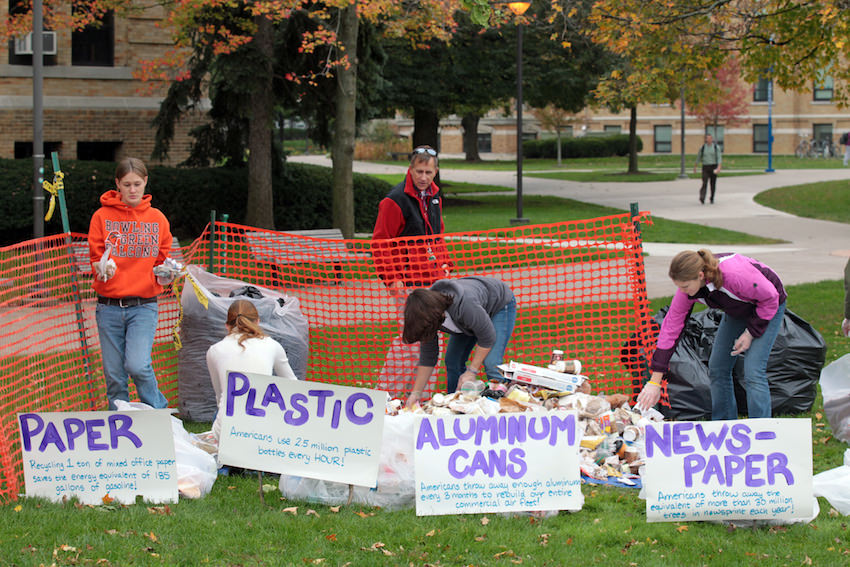 Inspiring the community to take “Action Today for a Better Tomorrow” is the goal of Earth Week 2017 (April 17-21). The week includes the popular annual Eco-Fair, guest lectures, an environmental-themed film, a tree planting and the regular Friday Night Lights. All events are free and open to the community.

President Mary Ellen Mazey will kick off Earth Week at 11 a.m. April 17 with an update on the University’s progress with its Climate Action Plan, where sustainability efforts are now and priorities for the future. She will speak outside McFall Center.

That evening, Abiye Alamina, economics faculty member, will present “Corporate Social Responsibility and Sustainability: How Economists Think About These Issues.” His talk will begin at 7 p.m. April 17 in 208 Bowen-Thompson Student Union. Alamina will examine questions about how to reconcile business’s basic goal of generating profits with socially desirable and responsible goals such as sustainability and how that might be achieved.

Earth Week this year coincides with the start of the campus “When You Move Out, Don’t Throw It Out,” the collection of clothing, household goods and packaged and canned food in preparation for student move-out. All items are donated to local food pantries and shelters. Open to the community, over the course of its existence the initiative has spared tons of usable goods from area landfills. Collection boxes will be located in the Bowen-Thompson Student Union, Outtakes stores, the Greek houses and residence hall lobbies.

On April 18, nature writer and former park ranger Jordan Fisher Smith will share “Engineering Eden: The True Story of a Violent Death, a Trial and the Fight Over Controlling Nature.” He will speak at 7 p.m. in the Union Theater. According to publisher Penguin Random House, his book is “the fascinating story of a trial that opened a window onto the century-long battle to control nature in the national parks. When 25-year-old Harry Walker was killed by a bear in Yellowstone Park in 1972, the civil trial prompted by his death became a proxy for bigger questions about American wilderness management that had been boiling for a century. At immediate issue was whether the Park Service should have done more to keep bears away from humans, but what was revealed as the trial unfolded was just how fruitless our efforts to regulate nature in the parks had always been. Smith uses Harry Walker’s story to tell the larger narrative of the futile, sometimes fatal, attempts to remake wilderness in the name of preserving it.” Smith's talk is sponsored by the Department of the Environment and Sustainability.

"The fascinating story of a trial that opened a window onto the century-long battle to control nature in the national parks."

The Eco-Fair, on April 19, is a yearly highlight of Earth Week. The Union Oval will be filled from 11 a.m. to 2 p.m. with representatives from campus and community environmental clubs and organizations sharing information and offering ways to get involved. During the fair the Environmental Service Club will conduct a trash audit to help discover what is being thrown away on campus headed for the landfill, with the goal of finding alternate solutions. In case of rain, the Eco-Fair will be held in the lobby of Memorial Hall.

April 20 brings the documentary “The Economics of Happiness.” Hosted by the Department of the Environment and Sustainability, the screening begins at 7 p.m. in the Union Theater. The film “describes a world moving simultaneously in two opposing directions. As governments and big business continue to push for ‘growth’ in the form of increased global trade, we’re seeing an increase in climate chaos, senseless war, fundamentalism, financial volatility, income inequality and the consolidation of corporate power. At the same time, people around the world are resisting those policies, demanding a re-regulation of both trade and finance. And, far from the old institutions of power, communities are coming together to re-build more human-scale ecological economies based on a new paradigm – an economics of localization.”

Rounding out the week, on April 21, BGSU students and Campus Operations will take a tangible step toward the University obtaining Tree Campus USA designation by planting trees funded by campus partner Coca-Cola. BGSU is part of the annual Arbor Day effort to increase the number and variety of trees across the country. Not only do trees beautify the environment, they emit oxygen and help clear carbon dioxide and other pollutants from the air as well, and their benefit lasts for many years. To see the value of a single tree, visit the Tree Benefit Calculator. The plantings will take place from 1-2 p.m. between Kohl Hall and Carillon Place.

That evening brings Friday Night Lights, when a team of BGSU students goes about campus turning off lights and unused electronics in empty classrooms and other spaces. The savings in energy and cost from this weekly volunteer effort has been substantial and helps the University reach its goal of carbon neutrality. Volunteers meet at 6:30 p.m. at the Union Theater before moving out on their rounds.

Earth Week is co-organized by the Office of Campus Sustainability and the Department of the Environment and Sustainability with participation of campus clubs and organizations.