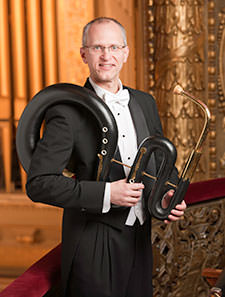 There’s a serpent in the College of Musical Arts. Not of the reptilian variety, but rather the musical type. The college will host a residency on the snakelike historical horn featuring Douglas Yeo, the leading scholar on the instrument. The event takes place April 4-6 at Moore Musical Arts Center and includes a free public concert, a seminar and a lesson on playing the serpent, plus master classes with college students and faculty members on the serpent and the trombone.

“The Ruth P. Varney Serpent: A Conversation and Concert Led by Douglas Yeo” will begin at 8 p.m. Thursday evening in Bryan Recital Hall in the Moore Center, with a reception following in the Kennedy Green Room. The program includes marches written by Christopher Eley, Samuel Wesley and Josef Haydn for the Duke of York, the Prince of Wales and the Derbyshire Cavalry Regiment, plus a divertimento in four movements attributed to Haydn. Yeo’s performance will be accompanied by students and faculty from the College of Musical Arts.

The idea for the BGSU serpent conference came about when the college received the donation of a serpent from Dr. Glenn Varney, professor emeritus of management. The instrument had belonged to his late wife, Ruth, whose grandparents had purchased it for her mother.

“It is an English military serpent with four keys by an anonymous maker, likely constructed in the mid to late 1830s in England,” Varney wrote in the concert program. “This serpent was purchased at an antique store in London, England, in the early 1900s.” Ruth Varney stored it in their living room next to the piano until its historical value was discovered in the 2013 after the Varneys contacted expert Craig Kridel of the University of South Carolina.

Upon receiving the donation of the serpent and its original ivory mouthpiece, the college sent it to Yeo, who kept it in his home in Arizona for several months and played it regularly.

Yeo retired last year from the trombone faculty at Arizona State University, where he had served for four years after a 27-year career as bass trombonist with the Boston Symphony Orchestra. One of the leading exponents of historical bass brass instruments in the world as a performer, teacher and scholar, he began playing serpent in 1994 for performances in Boston, New York and Tokyo of Hector Berlioz’s newly discovered “Messe solennelle” with the Boston Symphony conducted by Seiji Ozawa. Since that time he has performed on it regularly with the Boston Symphony as well as period orchestras. In 2011, he organized concerts of chamber music featuring serpent in Rouen and Paris, France, as part of the first international symposium devoted to the serpent. In 2003, Yeo’s ground-breaking compact disc, “Le Monde du Serpent (The World of the Serpent),” was released to critical acclaim. This was followed in 2010 by his innovative DVD project, “Approaching the Serpent: An Historical and Pedagogical Overview,” produced by Berlioz Historical Brass. His playing on historical instruments appears on video and audio guides in museums around the world.

The origins of the serpent are obscure, according to Yeo, but scholars recently have pointed to Italy in the early 1500s. It was much used in France during that era to accompany the singing of plainchant in the church, and was most often used generally to accompany voices. The serpent came to England via Hannover, Germany, with the Duke of York’s band around 1785, and took on more military purposes, but fell out of use in favor of more modern wind instruments that were easier to control. The modern revival of the serpent came about thanks to the efforts of the late Christopher Monk (1921-90), an Englishman who began making serpents in the 1970s and who formed the instrument’s first evangelistic group, the London Serpent Trio. Since then, the serpent’s revival has reinstated it in vocal and chamber music groups as well as the symphony orchestra where it lends its distinctive, blending voice to works many composers including Haydn, Mendelssohn, Beethoven, and Wagner.