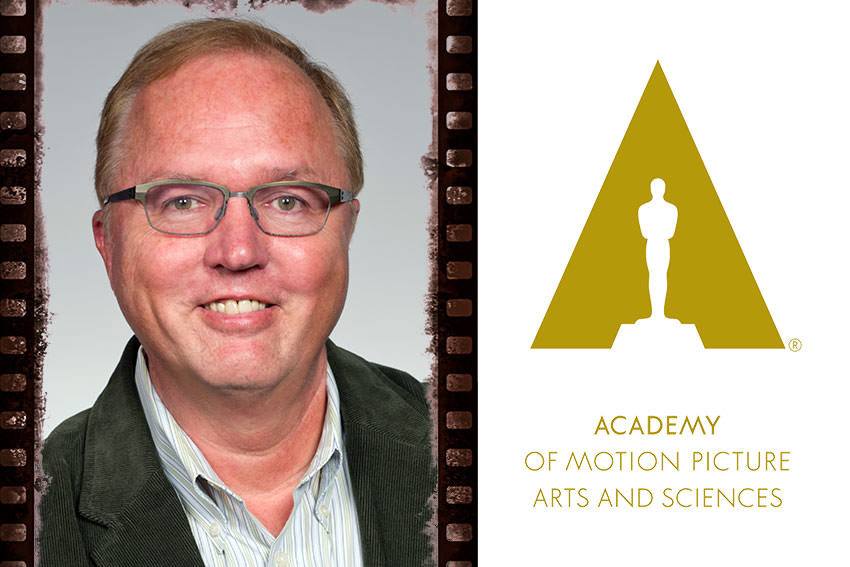 It’s a book, a casino, a song and a movie. But for Bowling Green State University alumnus Randy Haberkamp, “Westward ho” was also the direction his life took after graduating in 1979.

He came to BGSU from New Knoxville, Ohio, because he was interested in journalism and because “it seemed far enough away from home without being too far, big enough without being too big, and the community and courses felt like it offered a nurturing environment for a guy from a very small town who graduated with 32 other classmates.”

He didn’t know then that BG was a stepping stone to a much larger town.

“My time at BGSU was the perfect incubation period in going from being a kid fresh out of high school to a very green version of an adult,” he said. “There were opportunities to try many things.”

Haberkamp wrote a column for the BG News on entertainment, was involved in the Campus Movies division of the University Activities Organization – serving two years as chairman – appeared in several plays in the Joe E. Brown Theater and worked backstage in the University Hall Theater.

“The variety of things I was able to do and experience enabled me to be flexible in my future career and to have skills and experience that I could transfer into a very collaborative and fast-paced business,” he said. “It’s so important to be able to appreciate and understand what the other facets of the motion picture business consist of, and the challenges and skills of those you work with, even if you’re never called upon to do that specific job.

He fondly recalls the first costume made specifically for him, the writing of professor Lois Cheney and the set designs of professor Robert Hanson.

“The Pop Culture department also was a huge influence on my understanding the future value of the things I loved above and beyond the entertainment aspects of them,” he said. “The writing, publicity, scheduling, and above all, showmanship skills I learned as a part of the newspaper, UAO and Huron Playhouse are reflected in my current work every day. I’m so grateful for that broader base from which to discover.”

After graduating with a bachelor’s degree in Communication, Haberkamp applied to USC and UCLA film schools.

“I realized I was really more interested in moving images than photography or journalism,” he said. “It seemed like a crazy career for an Ohio kid to pursue, but movies were my passion and BGSU cemented that for me, so I decided to be a stereotype and follow my dreams west.”

He found out he got accepted to UCLA while at the Huron Playhouse and soon drove west toward Los Angeles.

“BG was a nice shift from a town of 700, but LA was a real shocker,” he said. “The rents were nearly triple what I’d paid in Bowling Green and I was on my own. Fortunately, UCLA gave a community focus to my further education. I made my student films, was a cinematography teaching assistant, and learned the aspects of the film business as well as ‘Hollywood’ and the film business.

“Even though UCLA was a very crazy and somewhat disorganized environment, it proved to be the perfect preparation for a career in entertainment, because the business itself is also crazy and disorganized.”

Haberkamp credits some of his success to finding his own way, finding people you can depend on and learning how to recover from the ones you can’t. He also found that his Midwestern work ethic was a plus.

“Showing up on time with ideas and patience was eventually rewarded,” he said. “I took a job at CBS because freelance wasn’t my style and I loved knowing where I was going to work every day – which at the time was through the doors I’d seen animated in the opening sequence of ‘The Carol Burnett Show’ on television.”

He started in music clearance, which was “an absolute hell job of research, detail and aggravation, but with wonderful people who loved television.” From there he moved onto program coordination, which was a department central to getting the shows delivered from the various producers and making sure everything aired to the second with commercials, promos and every other element of the broadcast.

“The positions I held there gave me insight into how all the pieces fit together and also the planning required to keep everything running smoothly and to deal with changes like interrupted programming because other disasters,” he said. “I was behind-the-scenes on live broadcasts, a unique insanity all its own that is thrilling. I eventually ended up getting a job overseeing the acquisition and editing of theatrical films for broadcast as well as the production of various specials, including award shows, music specials, animation and even beauty pageants. It was a great challenge to keep all the pieces of the puzzle moving forward to a successful broadcast.”

He eventually transitioned into something he really loved, and thought would be calmer – classic films, film history and film preservation at the Academy of Motion Picture Arts and Sciences, a job he said felt like a direct descendent of his UAO work at BGSU.

Haberkamp has now worked at the Academy for 15 years, first in educational programming and now as managing director of preservation and foundation programs.

“I oversee our amazing motion picture library and film archive, our public and educational programs, the Student Academy Awards and Nicholl Fellowship screenwriting competition, our visual history project, our talent development internship program, and our digital management services department – in short, a lot of the stuff we do beyond the Oscars,” he said. “I love finding ways to share my love of filmmaking, film history and the nurturing of new talent, which all ends up as an amazing giant movie love fest.”

Haberkamp’s daily work includes overseeing the various departments that preserve recently rediscovered films, such as “The Front Page,” “The Ballad of Gregorio Cortez,” and “The Memory of Justice” or receive pieces of film production history, such as an original production design sketch from “Citizen Kane,” original cells and animation drawings from “The Thief and the Cobbler” and costume design sketches from “Barbarella.” The visual history department is currently recording histories with Cuban filmmakers Daisy Granados and Nelson Rodriguez, recently interviewed director Charles Burnett and cinematographer Ellen Kuras, and is working with an industry-wide cooperative to preserve and digitize more than 1,000 previously recorded oral histories. They also just completed database mergers of the library and archive, which is part of a larger initiative to make the collections searchable from one source and eventually provide easier access to the holdings for the library and for the curatorial team of the upcoming Academy Museum of Motion Pictures.

“On a good day there are wonderful stories of inspiration and on a bad day there’s lots of administrative problems to solve, but it’s a wonderfully challenging job, which intersects with the most talented filmmakers in the world and some students hoping to follow that path,” Haberkamp said. “My job is to keep all the activities of these various departments coordinated, which can mean everything from working on long-term strategies to dealing with personnel or budget issues, as well as working with the Academy’s members and donors.

“On a daily basis it’s really complicated, but every once in a while something happens that illustrates the pure pleasure of preserving and sharing some piece of film history or seeing a student or filmmaker be inspired by the Academy’s work.”

Haberkamp added that he recently got to work with BGSU alumna and Oscar winner Eva Marie Saint in a private dinner with other Oscar winners celebrating this year’s acting nominees and as she introduced a live concert presentation of “On the Waterfront” with the LA Philharmonic.

The Academy Museum of Motion Pictures is scheduled to open in 2019 and will include 300,000 square feet of exhibition space, including permanent and revolving temporary exhibitions. It will feature a 1,000-seat theater that will continue to present 35mm and 70mm film presentations as well as digital and 3D. A 300-seat theater will offer more cinematheque-style programming. It is being designed by Italian architect Renzo Piano and features a rooftop view overlooking the Hollywood Hills.

“From that rooftop visitors will be able to take a virtual tour of Hollywood throughout the years of its constantly evolving filmmaking and cultural history,” Haberkamp said.

This new museum will continue to emphasize the power of visual storytelling through motion pictures, something Haberkamp said is both gravely misunderstood and a force of inspiration.

“We often believe what we see more than what we hear, as images are much more universal in the stories they tell, yet we don’t often analyze how they affect us or who is manipulating them,” he said. “Movies can take us to any place, any time or share any point of view. When later viewed as artifacts from the past, movies show us who we really were, what we really thought, how things have changed, and how things have stayed the same. They provide a context for today even as they can suggest what the future might be, for better or worse.”

And finally, because to many the Academy of Motion Picture Arts and Sciences means Oscars, yes, Haberkamp does have a role at the prestigious annual event.

“I have two of the best jobs at the Oscars, which I do with great pleasure,” he said.

At the end of the red carpet, he works with a photographer to get photos of the Academy’s governors, industry VIPs and Academy staff for posterity. And during the show, he asks the winners to autograph the Oscar show poster for the Academy library collection.

“So I get to meet everyone when they are at their happiest,” he said. “It’s the best possible way to experience what Oscars really mean, to see how inspired filmmakers are by the legacy they have joined and are surrounded by at the show. What people are wearing is fun, but the passion that filmmakers have for their work and the excellence it reflects is the real experience.”