Classroom is a comfortable home for BGSU alumnus 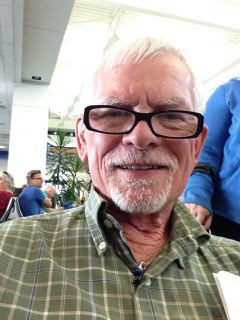 With dairy cattle in the barn that needed attention at all hours of the day, and fields full of grain to attend to, life on the family farm involved a lot of work that might interfere with a college student’s academic commitments. So when Ray Johnson enrolled at Bowling Green State University, his parents insisted that he live on campus, even though home was just 15 miles away in rural Henry County.

“They knew with all there is to do on the farm, I would feel obligated to help with the chores if I lived at home,” Johnson said. “They were very supportive and they wanted me to be on campus, where I would have the best chance to be successful. I’m very grateful for that.”

That decision, arrived at in 1961 when Bowling Green had an enrollment of just 4,000 students, set Johnson on a course where education was the essential element of his life. Now retired, the 1965 graduate taught middle school, junior high and high school in the Pacific Northwest for 34 years, and then spent another decade supervising student teachers at Portland State University.

“My whole career was really good,” Johnson said. “I ended up working for the best high school principal I ever had, the best superintendent I ever had, and with the best curriculum director I ever had. I was very fortunate – a lot of teachers don’t have that kind of experience.”

Johnson’s route to the Northwest was a bit unconventional – a history professor named Virginia Platt whom he had at BG was from Washington, which she referred to as “God’s Country.” Her description intrigued Johnson enough for him to look into teaching jobs in the region.

“That got my interest, and I also had this adventuresome spirit coming out at the time, and I thought a physical break from my family and the farm might be good,” he said. “I had job offers in Ohio, but I knew if I took those I would be going home most weekends, so I decided to look beyond.”

A telephone interview with a school superintendent in Oregon resulted in an immediate job offer and Johnson being hired on the spot.

“By that time I was ready to graduate and move on to the next thing, so even though it was a big move going out to the Northwest, I figured I could handle it for nine months and if the job didn’t work out, I’d be back in Ohio,” he said. “But I completely fell in love with Oregon and just stayed.”

At his first job, the school needed someone to supervise the yearbook and newspaper operations, and with no background in either area, Johnson took on the assignment.

“I ended up doing that for half of my career,” he said. He also spent a considerable portion of his long tenure in the classroom teaching math, a subject he had sworn off while at BGSU.

“I guess it’s a bit ironic but when I went to college I was very good at math, but I was tired of doing math,” he said. “I had no intention of doing math in college.”

But the entrance exam at the time involved a math proficiency segment, and Johnson’s math skills got the attention of the BG academic advisers.

“I scored so highly on the math test that they talked me into doing the honors program in math. I got credit for courses I was allowed to skip, and I guess it appealed to my ego a little bit,” he said.

As a sophomore, he dropped out of the math honors program when the work load became too heavy, and focused on his history and political science classes, with plans to teach history after graduation.

“That was my intention, to teach history,” he said, “but when I started at that small school in Oregon they had me teaching both math and history, and it didn’t take me very long to discover that I didn’t really enjoy teaching history, but I did enjoy teaching math quite a bit. That happens in life -- something else comes along, you make a choice, and it turns out to be something you really love.”

Johnson said he recalls the excitement on campus when he was at BGSU since his enrollment coincided with the heyday of Falcon Basketball, when future NBA stars Nate Thurmond and Howard Komives played for BGSU.

“It was a great time at BG, but I really focused on my studies and I wasn’t involved in a lot of other activities,” he said. “It was more about getting an education, but I really enjoyed my four years there. I felt I was well educated and well prepared to go out and be a teacher. I feel it’s important to give back to the place that gave me that foundation.”

Johnson, who spends a lot of time traveling and working with non-profit organizations, said he saw education change throughout his career and tried to stay current with the evolution in the profession.

“I was brought up in the old format where you primarily lectured, but I changed a lot along the way,” he said. “I saw new ways of teaching with the young teachers that came along and I always felt it was really important to find what works for you. There are certain things about teaching that are really indigenous to your personality, and that can be a strength in the academic setting.”

Johnson said he has remained friends with some of his former students for nearly 40 years, and ended up teaching some of the children of former students. He found his place in the classroom and stayed.

“Working with teenagers was rewarding – they can be horrible one day, and then the next day act like nothing happened,” he said. “They were fun to be around, and it was exciting when after you had worked very hard with them, the light bulb came on. Getting them to think was very rewarding every day of my teaching career.”