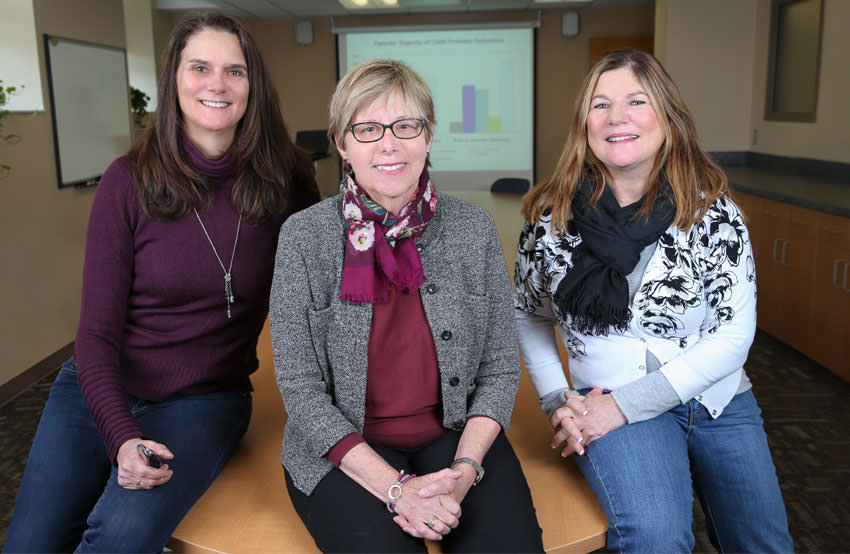 The largest grant is $1.1 million from the Eunice Kennedy Shriver National Institute of Child Health and Human Development/National Institutes of Health (NICHD/NIH) for the support of the Center for Family and Demographic Research. The center was formed on BGSU’s campus in 2000, and has been continuously funded by NICHD since 2002. There are fewer than 25 universities that are funded for a population research center in the country.

“We are happy to have support for the Center for Family and Demographic Research,” said Manning, who is the director of the CFDR and the principal investigator (PI) on the NIH grant. “The Center grant is an infrastructure grant that provides work space, security, conference rooms and skilled staff to support research at Bowling Green on health and well-being of children, youth and families.”

Since its inception in 2000, research at the Center has aligned with the Population Dynamics Branch scientific mission with a focus on family demography, fertility and reproductive health, and social contexts and well-being. The CFDR provides national leadership, and continues to foster an environment of innovation and collaboration that yields high-impact research on cutting-edge issues in demography including new work on same-sex couples, family trajectories of reproductive health, and the role of the criminal justice system in families and well-being.

The grants for the Pathways and Cessation of Violence projects will allow the researchers to expand their longitudinal studies. Getting this kind of grant “is something we’re all really proud of,” Longmore said, noting that it places BGSU among elite universities.

The NSF and NIJ grants draw on the BGSU researchers' original work that started with a study of teens who lived in Lucas County in northwest Ohio, and the project has looked at a lot of different aspects of their “growing-up years” ever since.

“We have followed them since they were teens,” said Giordano, who has led the project. “We’ve interviewed them five times, and these new grants will allow us to interview them a sixth time. We have had different kinds of focuses throughout the project, ranging from dating and sexuality to intimate partner violence as they got older.”

One aspect of the sixth interview will look at the range of their experiences with the criminal justice system, including the experience of being incarcerated.

“We are looking at what effect, if any, does parental incarceration and other system contact have on the young people in these families who have had this experience,” Giordano said. “It’s a timely issue with the interest in mass incarceration and then the growth of the use of incarceration. What effect does this have on families?”

The other feature of the study will build on a prior grant on intimate partner violence.

“What causes people to have these difficult conflicts in their relationship?” Giordano said. “We are looking at people who have had those type of conflicts reported to us in the past who are actually moving away from those negative patterns.”

People change their conflict resolution tactics, but there hasn’t been a lot of empirical evidence of how this occurs.

“It’s particularly interesting because I think there’s this popular assumption that once you begin an abusive relationship, it always will remain abusive,” Longmore said. “That’s sort of the popular culture notion, and that’s not necessarily true. What’s the processes or mechanisms that lead people into this kind of change? Sometimes, the change is simply breaking up with the person. Sometimes, there are other factors as well, and that’s why it’s an exciting project.”

Competition for federal funding is very tough. Being successful in obtaining the grants showcases the grantsmanship and productivity of the research team, Manning said.

Due to the longevity of its research, the team is able to bring unique data to issues related to adult and child well-being not available in other research.

“It’s exciting because we are curious to see what’s happening to these folks as they’re moving through their life course,” Manning said. “It’s an opportunity to follow up on them again not just because we want to know but because we have scholarly questions about their well-being and can help answer questions about people who start off in tough circumstances. How do they make it out? Who does and who doesn’t? Those are the kind of questions you can ask with these kind of in-depth data. It is exciting because it takes a long time and commitment to do well.

“We’re sort of fortunate too that some of the data analytic techniques that are now available, our data are perfect for it. There are some trajectory techniques where you can follow how an individual has changed over time, and these are kind of newer techniques, and because we have this longitudinal data we are able to take advantage of that. How do individuals change over time? A lot of data sets just can’t do that because you don’t have the data covering their lives from adolescence to adulthood.”

Not only has the Center provided an abundance of important demography data, but BGSU students have benefited from research training.

“The students have been involved in the actual data collection,” Giordano said. “In social science, a lot of times people are moving to using existing data sets, so they don’t actually learn vital skills, how you actually have to go out and find people and how you construct questionnaires and manage the data once you complete the interviews. So, our students get a really good experience in data collection and analysis.”

BGSU’s move toward experiential learning — working and learning outside of the classroom — is a key to the learning process, Longmore said.

Manning agreed that experiential learning experience is crucial for students.

“The idea of a team is a good example,” she said. “It gives students a research experience that can help hopefully translate into a job or graduate school. They obtain some important and applied skills.”