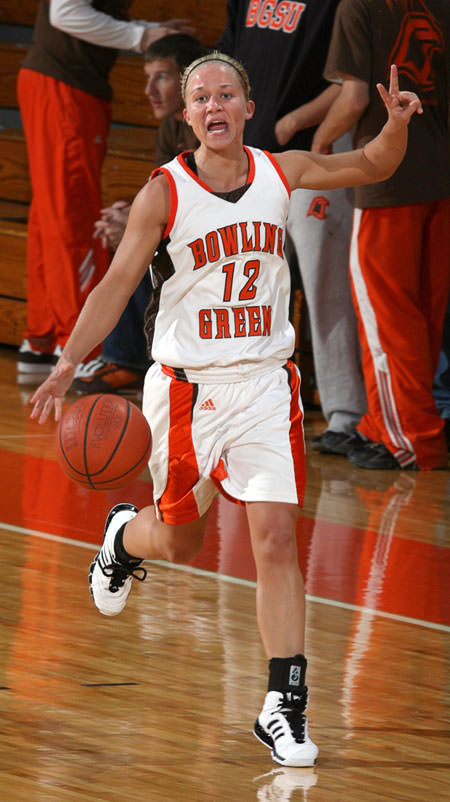 Whitney Taylor in 2006If you've ever watched videos on YouTube or subscribed to any of the site's channels, chances are that experience was made possible by Bowling Green State University alumna and former Women's Basketball player, Whitney Taylor '09.

Taylor, who played for the Women’s Basketball team, works for Google and is a senior interaction designer at YouTube.

"I make sure that experience is great and build new features for our users from casual to highly engaged," Taylor said.

Taylor was hired at Google about a year and a half ago. Prior to that, she was at Zynga, where she re-designed the gaming app Words with Friends. The launch of the new app was so successful that Taylor was a featured speaker at the 2015 Game Design Conference in San Francisco. It also remained No. 1 in the app store for 50 days after its debut.

"That was a big point in my career," she said. "I grew that team from one to 10 designers - it was a phenomenal opportunity."

Shortly after that successful launch, a former colleague who worked at Google referred Taylor to the company.

"That was my dream job, so after four and a half years at Zynga I quickly accepted the position at Google," she said.

Taylor has a Master of Fine Arts in interactive design and game development, which she received at Savannah College of Art and Design. She went straight from that program to her first job at Zynga.

"On Words with Friends I got to design experiences for millions of users, and now at YouTube I design for billions of users,” Taylor said. “I feel fortunate to work on a product that has such an impact.”

As the lead of channel subscriptions, Taylor is responsible for the user experience when subscribing to YouTube videos. She decides everything from what the subscribe button will look like to the custom feed it builds and what the user's channel list looks like to how a user is notified and how they can unsubscribe. Taylor was also involved in the recent launch of YouTube's new feature, "Community."

"We transformed YouTube from being a video platform to being a social platform,” Taylor said. “So now, channels are not only able to post video but they can also post text, images and polls that syndicate to your subscription feed.”

Taylor credits BGSU's visual communication technology co-op program and the required internships for giving her the opportunities to work at big-name companies so soon in her career. She did four internships, including stints at E! Entertainment and Nickelodeon.

"Visual communications was a launching point for me," she said. "I think BGSU helped me explore new areas and really find where my passion was with interactive design."

For students who may be interested in taking a similar career path, Taylor stresses the importance of networking and internships.

"Get familiar with what the different roles are and narrow in on what interests you," she said. "Do everything you can to reach out to people, get your foot in the door and keep trying until it happens."

Taylor still keeps in touch with her BGSU Women's Basketball family. When she played, the team was ranked 12th in the nation and made it to the Sweet 16 in the NCAA Tournament in the 2006-07 season. Her time spent on the court helped give her skills that she still uses today.

"To have that opportunity to play on a world stage really prepared me because I was speaking and meeting with different groups and playing in front of thousands of people," Taylor said. "So when it came time for me to speak at graduation or a conference, I always felt very prepared for those situations."

Taylor is also thankful for her experience at BGSU and the opportunity she had to be a student-athlete.

"My time at BGSU was a great mixture of academics and athletics and prepared me for such an intense, rigorous industry," she said. "Basketball showed me some of the most challenging times of my life, which taught me to take everything in stride and not to sweat the small stuff.”

Taylor is engaged and lives in San Francisco. She is retired from competitive basketball due to a torn ACL, but is an avid surfer and snowboarder.