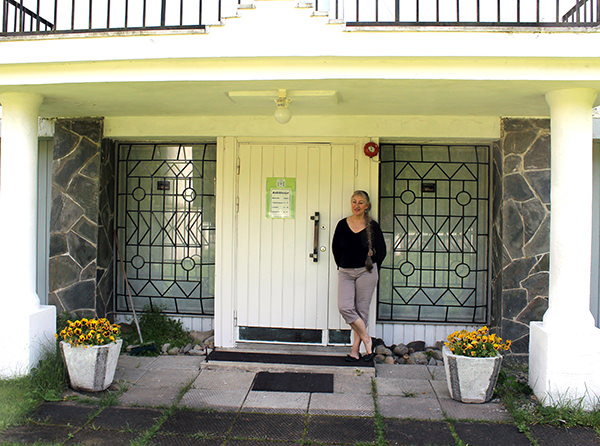 “As an artist who works frequently with an object-based studio practice, it may seem counterproductive to travel as much as I do,” said Mille Guldbeck, a faculty member in the School of Art. “However, the opportunities that exist at residency sites are worth any initial discomfort.”

When Guldbeck returned to teaching in the fall of 2015 after a full-year faculty improvement leave, she brought to her students and to her own practice the rich experience she gained in residencies around the world.

“I have been able to share my new work as well as insights into what may prove beneficial to student scholars and artists,” she said.

Again this fall she returns to the classroom, after two international residencies in Iceland, where she lectured, exhibited and explored ideas.

In 2014-15, Guldbeck worked at the Jentel Foundation, in Sheridan, Wyo.; Virginia Center for Creative Arts, in Amherst, Va.; and the Nelimarkka Museum in Alajärvi, Finland. In 2016, she had two Icelandic residencies, at the GIL Artist Society, in Akureyri, and SIM (Association of Visual Icelandic Artists) in Reykjavik.

Artist residencies provide a balance of structure, intense focus and creative collaboration that she finds most productive, Guldbeck said.

“The studio situation and geographical location are never identical, but the residencies I seek allow for immersive studio time and are often fully funded so that the participants are engaged consistently with their work practice,” she said.

“Living and working, as I do, in the Midwest poses substantial challenges when it comes to engaging with an audience and peers for my artwork. Residencies offer opportunities to engage with peers from all levels within the performing and plastic arts as well as writers.

“As an example, ­I was recently asked by Polish/Israeli poet Ruth Kessler to collaborate on a project. Although we do not have a specific theme in mind as of yet, this is an important activity for me to undertake, because it holds the potential to continue to expand my studio practice. This is one of the most important results that can grow out of a residency period: the connections and interactions that happen naturally because we are all living and working together. I also connect with others whom I invite to our campus as visiting artists.”

Although Guldbeck is primarily a painter, her work does not conform to any one style, but varies in its materials and approaches in response to her conceptual curiosity. She has a longstanding fascination with the sometimes terrifying but sublime power of nature shared by the painters of the Romantic school, a topic she explored in her 2011 show, “Presence.”

“Ongoing interests I have had in my work have been blurring the boundaries between reading and viewing, and my process reveals a sustained commitment to two sites of critique: formal and conceptual. By grafting one form of language onto another, I create an interstitial site, through which visual art opens up traditional categories and yet makes clear the inherent ambiguity of language,” she said.

Elements of each residency found their way into her artwork, and she returned to Bowling Green, Ohio, with a rich and varied body of new work. In addition, works she produced appeared in exhibits at the 2015 South Bend (Indiana) Museum of Art Biennial, and a solo exhibition at the Nelimarkka Museum in Finland.

In July 2015, she had traveled to the Lake District of central Finland to spend five weeks in residence at the Nelimarkka Museum, the former home and studio of painter Eero Nelimarkka (1891-1977). The two-story villa acts a residence/studio, and the museum was designed for him by his friend the famed architect Alvar Aalto, who lived nearby.

“Eero was an important regionalist painter and very well known,” Guldbeck said. “It was his dream to bring contemporary artists to the area, and it turned out I was one of them.”

Guldbeck is Danish and had spent time in other parts of Scandinavia but never in Finland. Yet as soon as she arrived in Helsinki, she said, she felt right at home, and the feeling persisted in Alajärvi. “I was left with such a wonderful feeling after being there,’ she said.

That summer was the coldest in 50 years and very rainy, so Guldbeck spent much of her time in the house, with its painted floors, clean design and large windows in the studio.

“The light was phenomenal,” she said. “I was so far north that it never got dark.” Gazing out at the woods with their iconic silver birches — the national symbol of Finland — and walking outdoors on soil sparkling with mica, she began a dialogue with the house and its environs that she came to call “Conversations with Eero.”

“Slowly the house itself began to speak to me as an entity, through what I observed both in and around it,” she wrote for a brochure produced by the museum for the eventual solo show of her work.

“Here, in Eero’s former home, I realized I was working in another artist’s studio and began to think about the painter’s act of perception. I was using his rooms, seeing the same trees he had looked at, at least partially responding to some of the same stimuli.”

Among the few art supplies she had brought were 25 Prismacolor pencils. “I began walking around and systematically recording the colors I saw.”

These saturated-color palettes, drawn on Mylar, were the first pieces she produced in a series of small works. Then the mica made its way into a geometric design on muslin with aluminum leaf, another reflection of the magical silver birch and the northern light.

Gaining momentum, Guldbeck turned to an older photographic technique and created a darkroom where she could make cyanotypes —almost indigo in color, familiar to us from the original architectural blueprints. She created images using vintage textiles she found in town, sometimes overlaying them with natural materials such as dried plants and flowers that would have existed in Nelimarkka’s time. “I used what I found in an almost storytelling way, playing back and forth between ornamental things like doilies and natural objects.”

In tune with her love of geometry and grids, she was drawn to the eight corners of the villa and the structure of the space. “I used the environment and the house itself,” she said, “and the curators and the people who came to see the show were very responsive to it. The pieces were both tangible and recognizable but in a dreamlike state where people were making connections between the work and the space.”

“I created almost 30 works for a solo exhibition in the museum,” she said. “The museum ended up also acquiring one of my works for their permanent collection and overall it was a very rich experience for me.”

In one of those unexpected encounters that can be so meaningful, in that isolated place she met American artist and musician Wesley Berg, who happens to share her interest in vast spaces. Guldbeck invited him to be a visiting artist at BGSU in fall 2015, and the connections made among him and School of Art faculty and students have been mutually fruitful.