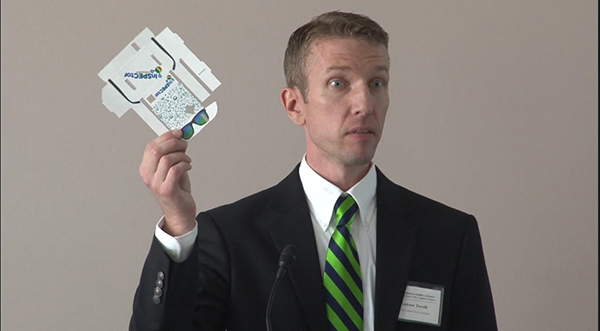 BGSU chemist Dr. Andrew Torelli is part of an international effort to raise awareness of the importance of science to society and to engage the public and legislators with current issues. Torelli recently served on an invited panel of experts as part of an informational briefing for members of Congress, their representatives and the public in Washington, D.C.

The panel’s topic was “Citizen Science: Empowering a Robust National Effort.” Torelli shared the exciting example of the Smartphone InSpector, a device developed by an interdisciplinary team of BGSU faculty and students that equips a cell phone to identify and measure contaminants in water and upload the data to an online site. The system is being field tested by a number of area Rotary clubs to monitor regional water quality.

The June 7 briefing was part of the American Chemical Society (ACS) Science and the Congress Project and the Consortium for Science Policy Outcomes at Arizona State University.

“The purpose of these briefings is to provide members of the public and legislators on Capitol Hill with information on important topics in science that address national challenges,” Torelli said.

“It was great to see bipartisan support for the briefing,” Torelli said.

The importance of citizen science is becoming clearer. According to the ACS, “As professional scientists explore the universe, they find instances and places where more hands, eyes, and voices are needed to collect, analyze, and report data.” The panel discussed “how various citizens are enhancing the nation’s scientific enterprise as well as ensuring that the government maximizes its benefits while avoiding any negative impact on the progress of science.”

Since it can be used by ordinary citizens, BGSU’s Smartphone InSpector is a perfect example of how anyone, not only scientists, can contribute to the body of knowledge on the increasingly important question of water quality.

Also on the ACS panel were Dr. Darlene Cavalier of Arizona State University, who created SciStarter, a site connecting people to citizen-science projects and other citizen-scientists; Dr. Sophia Liu, an innovation specialist with the United States Geological Survey who facilitates citizen scientists’ participation in such efforts as “Did You Feel It?” earthquake monitoring; and Dr. David Rabkin, vice president for strategic partnership, innovation and sustainability at the Museum of Science in Boston, which has been working at the intersection of citizen science, scientific research and relevant policy decisions for several years.

Because of the popularity of the citizen science topic, the American Chemical Society is planning a repeat of the panel discussion that will be broadcast live over the Web on Aug. 23 during the 2016 ACS National Meeting meeting in Philadelphia.

While in the capital, Torelli also met with the offices of Ohio Reps. Bob Latta (R-5th District) and Marcy Kaptur (D-9th District) to share news of the BGSU innovation.

The panel discussion and meeting with Ohio representatives were just some of the ways in which Torelli, a specialist in crystallography, is involved with promoting public and legislative awareness of science and its applications. In 2014, he was invited to participate in the opening ceremony for the International Year of Crystallography, held the United Nations Educational, Scientific and Cultural Organization (UNESCO) headquarters, in Paris. The goal of the year was to bring new awareness of crystallography, a field that has grown from physics and chemistry to be “at the forefront of many scientific endeavors,” Torelli explained, “and is even involved in important goals of advancement, awareness and peace.”