The crystal has been a source of fascination for thousands of years, even before Johannes Kepler observed the symmetrical shape of snow crystals in 1611. From gemstones to many forms of metals and even chocolate, innumerable substances in the world around us are crystalline in nature.

So important is the potential involved in understanding crystals and their roles in the structure of materials, biological molecules and chemical compounds that the United Nations has declared 2014 the “International Year of Crystallography.” BGSU chemistry faculty member Dr. Andrew Torelli, a specialist in crystallography, was invited to participate in the opening ceremony for the celebratory year, held in late January at the United Nations Educational, Scientific and Cultural Organization (UNESCO) headquarters, in Paris.

The goal of the year is to bring new awareness of crystallography, a field that has grown from physics and chemistry to be “at the forefront of many scientific endeavors,” Torelli explained, “and is even involved in important goals of advancement, awareness and peace.” 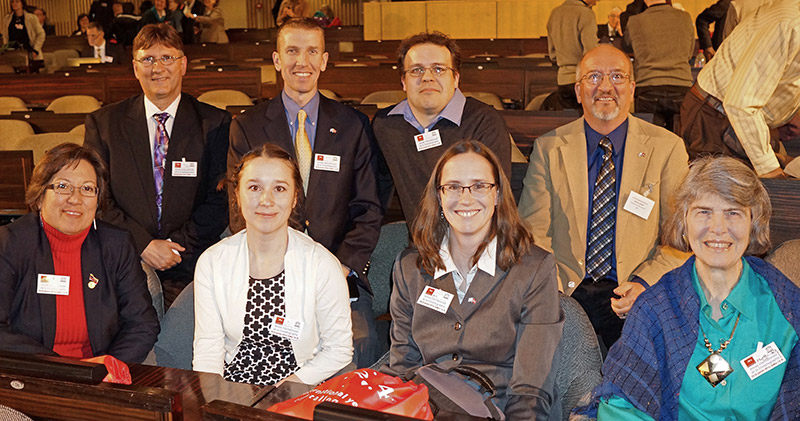 Crystallography has contributed to multiple Nobel Prize-winning discoveries and applications of wide-ranging benefit to humanity. From early studies demonstrating that matter comprises specific arrangements of atoms, to medicine, mining, testing construction materials and even analysis of substances on Mars, crystallography plays important roles in our everyday lives that are easily overlooked, Torelli said.

At the two-day event, Torelli joined several hundred guests including distinguished speakers, U.N. officials, a small American Crystallographic Association (ACA) delegation and many other international scientists, members of the press and students of all ages. He found himself in the company of prominent scientists from around the world, including a Nobel laureate and heads of numerous international scientific organizations. U.N. Secretary General Ban Ki-Moon and UNESCO Director-General Irina Bokova were among those addressing the assembly.

Torelli was also nominated by the ACA International Year of Crystallography Task Force to serve on an eight-member discussion panel of next-generation crystallographers, and was the only American among the international group.

The young crystallographers identified key issues to communicate to policy makers and global leaders on the importance of providing resources and advanced crystallography training not only in developed nations but in emerging nations as well — which is also an overall goal of the year.

As a member of a Young Scientist group within the ACA, Torelli has co-chaired several sessions at the association’s national conferences. Being able to work on an international scale, he said, promotes even greater connections among scientists and opportunities for up-and-coming researchers.

Torelli said, “One of the most moving and impressive parts of the event was seeing scientists of all ages coming together for dialogue and cooperation.”

Attendees learned about the Open Labs initiative, a partnership to bring X-ray instruments and training to Africa, Latin America and Asia. “I was also moved by the description of the SESAME (Synchrotron Light for Experimental Science and Applications in the Middle East) project, which is nearly operational after decades of planning and partnerships between scientists from countries that could hardly be imagined working together. . . . proof of the power of science to transcend political and social boundaries,” Torelli said.

Interestingly, the ranks of crystallography have always included a significant number of women responsible for major scientific achievements, including research related to identifying the structures of important molecules such as vitamin B12, penicillin and DNA, Torelli noted. That continues to be true today. In 2009, for example, Ada Yonath shared the Nobel Prize in Chemistry for her work solving the structure of the ribosome, an essential molecular machine that translates our genes into proteins.

Crystallography is the study of the structure of molecules. “Everything around us has a function that’s tied to the way it’s built,” Torelli explained, “and the same is true of molecules. The composition of a substance alone is not the whole story. A simple example, he said, is graphite and diamond — they share exactly the same chemical composition, carbon, but the atoms are arranged and bonded differently in each substance, and that makes all the difference.”

As the influential architect Louis Sullivan famously said, “ . . . form ever follows function,” and thus, Torelli said, by understanding the spatial arrangement and relationship of atoms in a molecule — “how they’re built” — we can better understand what they do. This also benefits efforts to control processes, for example in the case of medicine, or to design new materials with desirable properties.

Over the past 100 years, crystallography-related Nobel prizes have been awarded in medicine, physics, chemistry and physiology. Building upon early diffraction experiments that looked at how various crystals bend light in characteristic ways, Max von Laue was awarded the prize 100 years ago for his discovery of the diffraction of X-rays by crystals.

X-ray crystallography enabled scientists to measure the planes of the atoms in their crystalline arrangement and predict accurately their repeating array. Understanding the internal structure of crystals at the atomic level has allowed researchers to do such things as develop better drug treatments.

For example, “proteins in our bodies respond to small molecules like morphine and adrenaline,” Torelli said, so being able to design drugs in accordance with their intended targets is most effective.

Although over the past 100 years crystallography has become widely used, it requires a variety of skills and is not at all a routine procedure, Torelli said. It is “so essential” for both basic and applied science that UNESCO deems it a “very critical science,” he explained. With today’s financial challenges and competing demands on resources, a focus of the International Year of Crystallography is to remind society of the value of science and crystallography to humanity, not just in short-term solutions but in the long-term benefits of research, Torelli said.

Torelli wrote in his report to the ACA, “I left the event with a renewed sense of excitement to be included in a defining science that will have an important role to play in many great achievements of the future.”