Falcon BEST gets a boost

The crowd inside the Stroh Center is animated and energized. As the competitors battle it out on the arena floor, the mascots go through their machinations, the bands fill the air with brass tones and drum beats, and the cheer squads chant rhythmic support.

Are they watching the next basketball star headed for the NBA?  No.

It is likely they are encouraging an engineering prodigy who a decade from now will be helping design a deepwater port, or leading the construction of a complex freeway cloverleaf.

This is the Falcon BEST Robotics Competition at Bowling Green State University, and it is every bit as intense and heated as an overtime tournament championship game.

The competitors are high school and middle school students from throughout the area, while the coaching roles are filled by dedicated, enthusiastic teachers and team mentors, some of which come from the professional tech community. Each group is provided with an identical kit of parts and equipment, and then spends a month and a half designing, building and testing a remote-controlled robot that they expect to outperform those created by their competition.

“There are a lot of great moments in this program, but one of the best is seeing how these kids accept the challenges, go through the struggles, and then you see their excitement during the competition when they watch their robot work. It is very much like a sporting event,” said Dr. Wayne Unsell, professor in the Department of Construction Management in the College of Technology, Architecture and Applied Engineering, and the director of the Falcon BEST Robotics program.

“The sense of accomplishment they feel—they want to come back better next year—so to see that growth is amazing. I have no doubt that someone somewhere in this program, and it likely will be several, they will be superstars in the STEM (Science, Technology, Engineering and Mathematics) professions.” 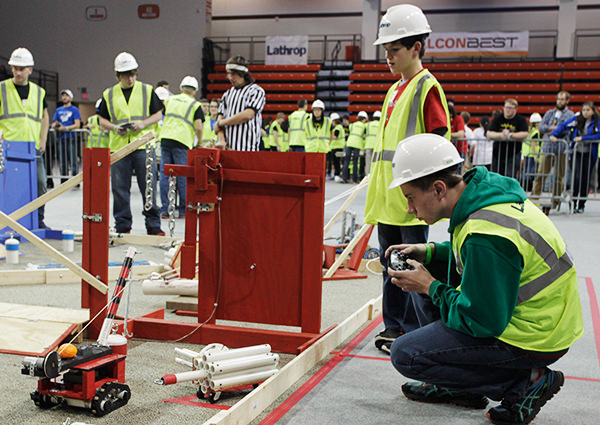 In addition to the actual robotics competition, the teams of students also compete for the BEST award, which goes to the group that most embodies the concept of “Boosting Engineering, Science and Technology.” They are judged on the project engineering notebook they must keep throughout the competition, their marketing presentation, a team exhibit and interview, their spirit and sportsmanship, and the performance of their robot.

With that wide swath of elements, this event is nothing like a simple robotics contest.

“We do this through a robotics game, but there is much more to it than just robotics, and that’s what makes the program very, very interesting,” Unsell said. “It involves kids that aren’t just techie robotics people. There are kids that are interested in business, interested in the marketing side, in the presentations, and interested in writing. It brings in all kinds of student aspirations in terms of what they would like to do with their lives.”

BGSU got involved in the competition about three years ago, but nationally the program has been around for about 20 years, Unsell said, after getting its start from a group of engineers in the Dallas area. Today some 50 hubs across the country host the robotics events, but Bowling Green is the only one in Ohio.

The game changes each year. The most recent robotics competition involved mining, while the previous event focused on construction. After a kickoff session, usually held in September where the teams learn the focus of that year’s competition, they go to work.

“We provide all of the raw materials—plywood, PVC, robot hardware, brain and all that goes with it in each kit,” Unsell said. “They have to get everything done inside a fairly tight time frame, so it is a very intense operation.”

Unsell said that since the Falcon BEST Robotics program involves the business and marketing side of each team’s approach, many more students are comfortable getting involved. There is also a cross-pollination that occurs, with tech-minded students being introduced to the writing and presentation side of the work, and those with more of an interest in the business aspect getting baptized into the technological realm.

“So instead of just having seven kids working on a robot, we can get teams of 30 or 40 kids that are involved with all of the aspects of the overall presentation,” he said. “This way, other students get introduced to the tech level and what goes on with the robot.”

Unsell said sponsorship from the corporate and business community is essential for the program to continue to prosper and expand. The Lathrop Company, a leader in providing construction services throughout the region, has committed to taking a lead role in funding the Falcon BEST Robotics Competition by pledging $5,000 in support for each of the next five years.

“This is a great program and a great fit for us with our affiliation with BGSU,” Lathrop President Steven M. Johnson said. “Being in the construction industry, we hire a lot of engineers, so the emphasis on math and science and those types of programs is something we support, and something that will certainly benefit us down the road.”

Johnson said he is encouraged by the enthusiastic turnout for the competition, and how involved the teams of students are in every aspect of the event.

“We’re very excited. About half of the students we hire come from Bowling Green, so the more we can help the University attract great students, that will help us, too,” he said. “There are a lot of very bright students out there, and if we can keep them here locally, that’s a win-win for all of us. I’m certain we’ll see the fruits of this in the coming years.”

Several of the teams from the most recent Falcon BEST Robotics Competition advanced to the regional level with St. Ursula Academy of Toledo taking two first place awards and one second place, while the Sylvania Southview High School team won a special award for its perseverance during the event.

Unsell said that the feedback from the high schools and middle schools participating in the Falcon BEST Robotics Competition has been extremely positive.

“We did a demographic study and found that 76 percent of the kids involved in the program said they intend to go into STEM profession studies in college, and that is just what the program is about, so we’re pretty excited with that response,” he said.

“And we had one student tell us that this was the most difficult thing she had ever done in high school, and it was also the most fun she’s ever had in high school. That’s the best endorsement we could ask for.”