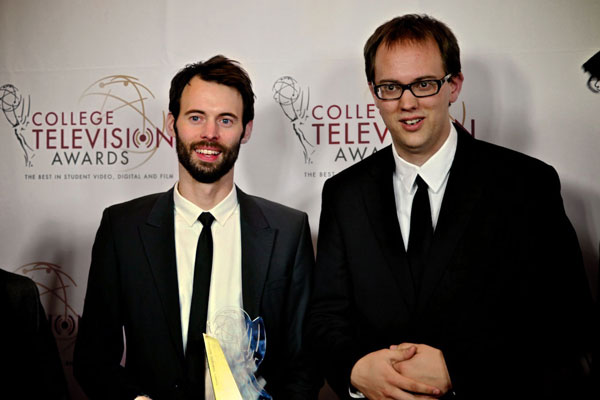 This was their second foray into the world of movies. Their first production, “Come Back to Me,” in 2012, won a College Television Award for Best Use of Music in a Film, from the Academy of Television Arts and Sciences.

The idea to shoot a new film came about when they found out that their parents would be traveling to Europe for the month. “I realized that we should make a film at my folks’ rad new log cabin in the Alaskan wilderness while they gallivanted around Eurovilles,” Justin said.

So while his parents were off exploring Europe, Justin called Michael to help him conjure up ideas for his film. “We landed on the idea of three brothers having a reunion after not seeing each other for a while,” said Justin. “As we’ve entered ‘adulthood’ we’ve found ourselves living in different cities — San Diego, Los Angeles, Denver — and we rarely all get together at the same time.

“So with our location and characters, we set out to find something for them to do, something to happen at this reunion. I’m not sure who mentioned it first, but we fell in love with the idea of them playing a game, a mystery game with role playing/acting . . . Growing up fans of mysteries, comedies, gaming, and fantasy, it came naturally to have these elements work their way into our script.”

Justin and Michael collaborated on the script, each one writing a portion then sending it to the other for adjustments, weighing in with notes, ideas, and feedback. “From our initial brainstorming session to our first complete draft of the script, it took about two weeks,” said Justin.

“We didn’t set out to write a comedy, per se,” he recalled. “Some of our initial ideas were more horror or sci-fi based. But the idea of forcing our estranged brothers to play a role-playing mystery game after not seeing each other for years spelled comedy to us, with a decent dose of drama when things start to get real towards the end. The comedy arose from having three points of view on the gaming — the brother who loves and lives for LARP (live action role-playing) games, the brother who is just going along with it to get along and not rock the boat, and the brother who doesn’t want to be there and finds it ridiculous.”

Michael, however, had more to worry about than just the script. He and his friend Benji Robinson were also responsible for the movie’s soundtrack. “I began demoing out some sneaky detective themes in fall 2013, but didn’t start working intensively on the soundtrack until January,” Michael said.

With a script in hand and a soundtrack in the works, Justin and his wife, Juliette, went about casting their actors. Adam McCabe, who plays detective Morocco, actually turned out to be gifted with the talent of improvisational comedy. He’s a mentor at the Upright Citizens Brigade theatre in Los Angeles. Henry Kaiser and Matthew Clay, who play the other two detectives, were found by a casting agency.

But aside from their acting capability, Justin had another thing to worry about: He would be living in Alaska with the actors in a log cabin for three weeks. “We didn’t have the budget to rent accommodations for everyone, so we were going to become temporary roommates on location in addition to making our film,” Justin said.

Now the only obstacle in the way was funding and that was fixed thanks to a Kickstarter campaign organized by Justin. Their campaign was even chosen as a “Kickstarter Staff Pick” for a few days.  Depending on how much users donated they received gifts like posters, T-shirts, even tickets to the movie premiere.

Michael and Justin have had a love for film since childhood. Justin, Michael, and Matt spent a lot of time making short films as children. They made everything from game shows to remakes of “Evil Dead” movies.

In the summer of 2001 Justin took the 16mm Film Production workshop where he physically cut film. The leader of the workshop was guest faculty member Tom Ludwig. Ludwig started off his course by saying, “if you don’t love filmmaking, these courses will make you love it. If you already love it, you’re going to love it even more.” That quote has stuck with Justin to this day, he said.

After the premiere, Justin reported, “The screening at AFI was fantastic. The audience loved it, laughed throughout, and gave us genuine, heartfelt compliments afterwards. Many went out of their way to write us days later to tell us what a great night they had, and inquired how they might buy it so they could share it with their friends and families.

“You never know how an audience will react when you get a roomful of strangers together to watch a film. We had a select few watch it for general feedback beforehand during the editing process, but it was a great relief to see the crowd understood what was happening in our film, and went along for the ride — laughing, falling quiet for dramatic parts, and you could get a real sense of a great vibe in the screening room.

“Many remarked they were emotionally moved by the film. To know that we created something that touched people and made them laugh, made them cry — this is why I make films, and to have succeeded with this one (so far), it is a dream come true.”

Even though the Edwards brothers are well on their way to becoming established Hollywood directors, both Justin and Michael still have day jobs and hobbies. When he isn’t making music with a piano, guitar, or drums, or with a band called the Genetic Engines; Michael works for the University of Colorado. Justin works as a freelance video editor and often works in production helping friends with their movies, commercials, and documentaries.