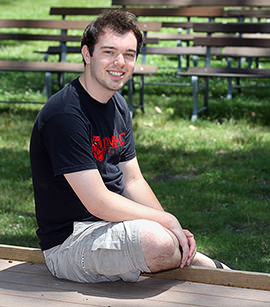 An image of a man holding up a skull, looking into where its eyes used to be, and speaking the famous lines “to be, or not to be.” That is the standard image people come up with when I tell them that not only am I a theatre major, but that I also have a great love for William Shakespeare’s works.

But, without fail, the question will always come up, “So, you’re a theatre major, what are you going to do with that?” The answer itself isn’t difficult or rehearsed. I’m going to teach and work to restore America’s love of the performing arts.

You probably didn’t know, but Bowling Green is home to four separate community theatre companies. Combine that with the High School drama department and the University’s theatre department, and you realize just how many opportunities are right here in northwest Ohio for establishing yourself in theatre, gaining valuable experience, and building a theatrical resume.

As a graduating senior, I’ve had many opportunities in this city to share my love of theatre, and of Shakespeare, and most of that can be attributed to three separate community theatre companies that I am privileged to have positions with: Lionface Productions, Beautiful Kids Independent Shakespeare, and Horizon Youth Theater. This summer has been a whirlwind of rehearsals, shows, learning experiences, and memories.

Lionface Productions was founded in 2010 and has put on four shows a year in each of its three seasons so far, and will put on four more this coming year. I have been involved with them as an actor and director for some time now and accepted a nomination this past May to sit on their Board of Directors. I directed an original one-act show that combined modern language with the language found in Shakespeare. This show was Lionface’s first submission to the Ohio Community Theatre Association’s northwest region festival where it won six awards and has been invited to perform at the state festival in September.

Lionface will be presenting two Shakespeare shows this coming season, both of which I am involved in. “The Merchant of Venice” will be performed for free in Bowling Green City Park on historic Needle Hall Stage during the Black Swamp Arts Festival on the first weekend of September. I have been cast as ‘Antonio.’

Lionface will also be presenting “Romeo and Juliet” over Valentine’s Day weekend this coming February. I am very proud to be directing this show and am looking forward to the challenge of bringing the “world’s greatest love story” to life in a new, unique way.

Bowling Green is so rich in theatre and in the arts, and it’s really such a shame that more people don’t know about it.Beautiful Kids Independent Shakespeare (BKIS) has been bringing free Shakespeare in the park to Bowling Green for 17 years. Originally founded by a group of theatre students itching for a summer show while still in Bowling Green one summer, BKIS has been passed down from student to student who all share a love of Shakespeare. I was chosen to direct the BKIS production of “Hamlet” last summer and was subsequently given the reigns of the group to produce this summer’s show “As You Like It.” I will continue to teach the traditions of Shakespeare in the park and will serve as producer for the next calendar year.

Horizon Youth Theatre (HYT) was founded in 1997 and seeks to teach children the ropes of theatre and prepare them for a future in performing, or simply to share in the love of theatre. I have been working as a director, instructor, and stage manager with HYT for nearly two years and love every chance I get to share my love of theatre with these kids who are so eager to learn. I am currently teaching an audition preparation class to students ages 9-12, and watching them work on their individual monologues all in the hopes of getting up on stage and wowing the audience is something I look forward to every week.

Bowling Green is so rich in theatre and in the arts, and it’s really such a shame that more people don’t know about it. I am blessed to be integrated so fully into these communities and to be able to share my love of theatre, whether performing Shakespeare in the park, teaching kids how to act, or working on the production end to bring a show to realization. My summer experience has been better than I could have hoped for and has opened so many doors for me in my field!