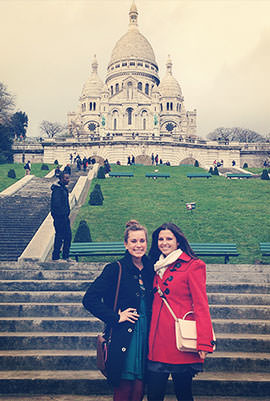 "Since I was a little girl, going to Paris has been my life goal," Rebecca Shirling of Pemberville, Ohio, said. "I have always had a fascination with the city, the people, their lifestyle, etc. When I began taking classes on campus, I enrolled in French class in hopes to someday go to Paris, but as I approached graduation I felt the pressure to begin my career search. I gave up on going to Paris, but then I heard about the public relations class going over spring break."

The story has a happy ending: The May graduate not only achieved her goal of traveling to Paris but managed to combine it with her studies in journalism and public relations, through a spring break trip sponsored by the School of Media and Communication and the International Studies Program. Accompanied by Dr. Catherine Cassara and Julie Hagenbuch, the BGSU group participated in the International Media Seminar offered each year by the International Center for the Study of Media at the American University of Paris.

Cassara and other school faculty have been conducting the Paris study trip every two to three years since 2000. The students take a one-credit class to prepare them for the travel, the seminar and their time in Paris, but they also enroll in a regular 4000-level journalism class about international press issues to prepare them for the academic side of the trip.

"When we weren't exploring the City of Light, our group of 15 students took part in sessions, each highlighting different topics in regard to media communications," explained Dan Lemle, a rising senior from Monclova, Ohio, majoring in journalism with a specialization in public relations. "Our first session, we met with Harriet Welty Rochefort, an American-born Parisian, who wrote the book 'Joie de Vivre,' among others. Mrs. Rochefort educated us on French culture and views, which proved to be very helpful while out and about in the city. She also spoke about getting inspiration for the book and what the writing process was like for her.

"One session involved us travelling to an entirely different part of the city, where we met with executives from Accenture, a global public relations and marketing firm. Speaking with the executives, we gained valuable information in regard to applying and interviewing for jobs, what it takes to work internationally and how to be successful right out of college. 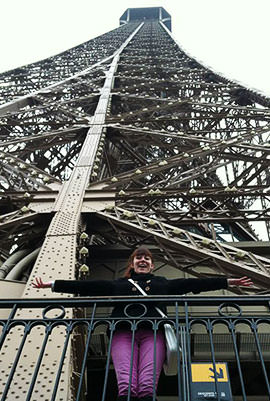 "We also had the rare opportunity to meet with the United States' ambassador to UNESCO (United Nations Educational, Scientific and Cultural Organization), at his private residence," Lemle said. "Other sessions included meeting with the public relations team at Disneyland Paris (while receiving free tickets to the park), other journalists from Paris and students from around the world who shared their experiences from their home countries.

"Overall, the seminar provided us the opportunity to gain valuable skills and networking opportunities, all while spending time in one of the world's most beautiful cities," Lemle said.

Shirling, who majored in journalism with a specialization public relations and a minor in marketing, and Iesha Mitchell, a telecommunications major from Detroit who also graduated in May, found new motivation through their experience.

"In our five days of seminar we learned more about the journalism industry from insiders who were kind enough to come speak to us," Shirling said. "I love how worldly everyone we talked to was; it was inspiring because I also would love to travel the world doing public relations. Overall, the seminar provided us the opportunity to gain valuable skills and networking. There are so many more opportunities out there than I ever imagined."

Mitchell, who initially was more reserved in her approach to the study abroad, said, "Of course I knew what the itinerary was before we took off to Paris, but the experience was much more rewarding than what I expected. After leaving sessions at AUP, I felt as if I learned so much, and I felt inspired to go forth in learning more about journalism.

"We also got a chance to meet with publishers of newspapers and magazines, and public relations agents. When we spoke with them, I felt as if we took away a lot of knowledge, and we were even able to leave business cards or resumes with them."

Despite Shirling's extraordinarily high expectations, Paris did not let her down.

"Through this trip, we were given the opportunity to learn, travel, meet new people, and participate in once-in-a-lifetime chances. I even made some new friends while there.""When I attended the initial information meeting, I actually teared up because I became so excited for the opportunity to go," she said. "Every day leading up to our spring break Paris trip made me more excited. When we finally got there, it was amazing, breathtaking and indescribable.

"Before the seminar began, we had a few free days to tour the city, go shopping, go to museums, eat at the cafes, do whatever we pleased. We managed to go see the Eiffel Tower, the Louvre, and the Arch of Triumph on the first day. The whole next week, any free time we had, we were out exploring the city or wandering off into residential areas to get the real feel of Paris.

"Through this trip, we were given the opportunity to learn, travel, meet new people, and participate in once-in-a-lifetime chances. I even made some new friends while there.

"I know funding is tough for a lot of students, but I would highly recommend this trip to Paris to anyone interested in foreign travel, France, public relations, different cultures, or journalism. It was beyond amazing!"

"Visiting Paris was a very rewarding experience that I could have never gotten at any other time," she said. "When I got a chance to visit the American University of Paris, it made me consider studying for my master's degree abroad. I believe this is an experience that all journalism students or even telecommunications students like myself should take part in. I loved being in a different country and engaging in the culture, because you do not experience this every day. I hope that other students in the future can experience this or even spring break in a different country other than France. Thank you so much for this experience."