The NFL comes to campus

Dick Maxwell '70 looked around the room and saw the makings of a pretty decent football team. But this collection of quarterbacks and linebackers and wide receivers was not there to work on passing and blocking and tackling.

The group of 20 current and former National Football League players came to BGSU with their next career in mind.

"There's life after football for all of us, and we're here at Bowling Green to explore some of the options that are out there for us," said Charlie Batch, who starred at Eastern Michigan in his college days. He went on to play for both the Pittsburgh Steelers and the Detroit Lions, and won two Super Bowls during his long NFL career. 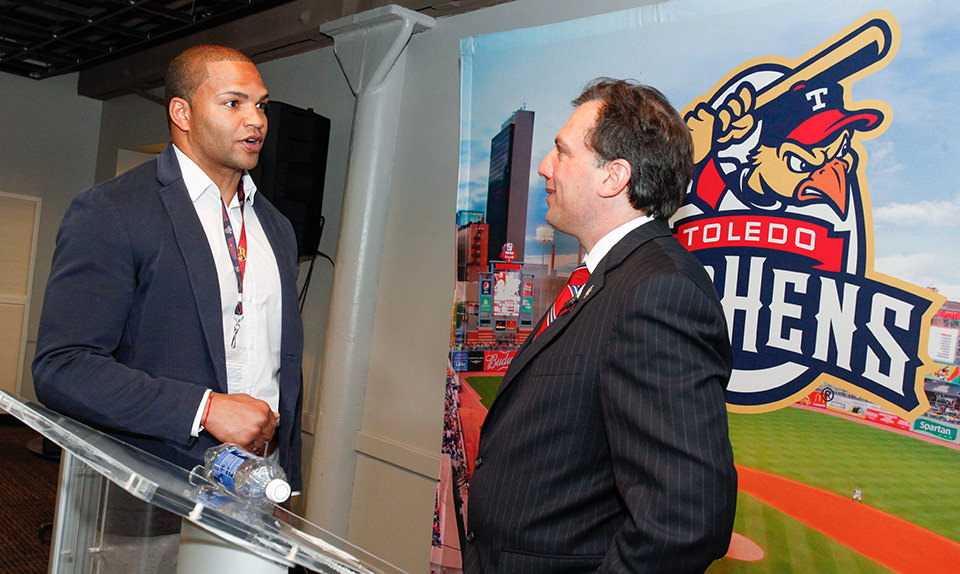 Batch and the rest of the NFL contingent were on campus May 13-16 to take part in a four-day career seminar - the NFL's first Sports Journalism and Communications Boot Camp. They received intensive training in writing, interview techniques, press conference questioning, use of social media, game coverage, crisis management and the ethics involved in sports journalism.

The camp is one of 10 training programs the NFL offers to its current and former players with their post-football days in mind. The BGSU School of Media & Communication and the Sport Management Program hosted the event, which was developed under the auspices of the Richard A. Maxwell Sport Media Project.

Maxwell, a BGSU graduate who worked in the NFL for 36 years, including 29 years in the league office, was the NFL's senior director of broadcasting when he retired in 2006. He founded the Maxwell Center for Sports Media at BGSU to assist students in the sport management and media & communication programs. Maxwell was back on campus to oversee the first sports journalism boot camp, which he had a major role in developing.

"It's always a pleasure to come back to Bowling Green, and most importantly, to do a little something to give back in return for the opportunities I had when I was here," Maxwell said.

"This is very much a collaboration between a number of parties," Maxwell said. "And it's great to be able to host it here at BGSU."

"That's another one of the neat things about it - that these players are here looking for a second career and that our students are so actively involved in assisting with the process," said Dr. Jacquelyn Cuneen from the School of Human Movement, Sport and Leisure Studies. "Both groups are learning a lot at the same time."

Dr. Terry Rentner, director of the School of Media and Communication, said the University offered a broad spectrum of experts and opportunities to make the four-day workshop as rich in hands-on experiences and information as possible.

"The way we look at this is we're educators and we are educating students," she said. "These individuals have expressed an interest in developing skills in the field of journalism, and we feel that we have much to offer them."

Maxwell remarked early in the week that he could sense the group's hunger for new skills and knowledge from the first time the boot campers assembled on Monday, in the Wilcox Room at the Sebo Center.

Former Pittsburgh Steelers Quarterback Charlie Batch speaks with a member of the media.

"What I saw was excitement and energy and an enthusiasm for taking on a new challenge," he said. "The biggest thing about working with these players and former players is that they are coachable. Throughout their whole careers in football, they have worked to be the absolute best, so when they step into a new arena, they want constructive criticism. They want to be good."

LaMar Campbell, who played five seasons with the Detroit Lions before retiring about a decade ago, already has his own Internet radio show, but he was at the inaugural boot camp seeking ways to improve his skills as a journalist.

"I'm here to get coached up. I've done some work in media, but it's a matter of wanting to master your craft," Campbell said. "Being around a great staff here at Bowling Green was an opportunity I couldn't pass up, because I'm still climbing the tree. I'm still learning."

Batch, who also has some broadcasting work under his belt, said he applied to take part in the BGSU boot camp sessions to broaden his foundation and hopefully open more doors to jobs in journalism and the media.

"I've always had a love of talking, so for me the writing part is a weakness I need to address. I needed to be here to learn a lot of what I don't know," Batch said. "The writing and interviewing aspects of the job are a different animal, and this was an opportunity to work on that part of the craft."

Former Nebraska quarterback Eric Crouch, who won the Heisman Trophy in 2001 as the top player in the nation, has played professionally in the U.S., Europe and Canada, and has done television work as a football analyst. He came to boot camp at BGSU intent on improving what he perceived as the real weakness in his "journalism game" - his writing.

"I want to be able to write in clear, understandable, exciting and interesting ways," Crouch said as the boot camp wrapped up. "I've struggled with my writing, and I'm glad that I'm getting compliments about it from the instructors here because I just wasn't sure where I stood."

Campbell said he valued the relationships he built with the instructors and the other participants in the camp as much as the education he received during his time at BG.

"One of the best things about this is that we'll have a real network of contacts when we leave here," he said. "I think we're all looking for something that we can be as passionate about as we are about football, and this is an awesome opportunity to explore that."

Batch said he fully expects to call on the BGSU faculty members involved in the camp for additional tips and direction when his second career unfolds.

"In a setting like this, you develop relationships with the faculty and the instructors, so you are able to come back to them later and ask for advice or help with something. That door doesn't close when the camp ends."

"We've all learned from one another," Crouch said. "We've connected, we've made new friendships, and new relationships. It was a chance to connect, and to feel like you're back in the locker room."

Maxwell was extremely pleased with the accomplishments of the initial Sports Journalism and Communications Boot Camp, and said he hopes to see the NFL call this play again.

''It was an A-plus performance by the people here at Bowling Green: the athletics administration and the faculty who contributed,'' he said. "It's been a good week for Bowling Green.''