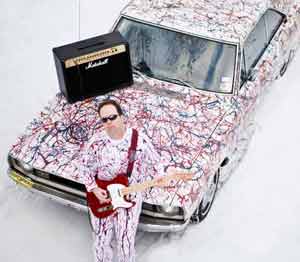 BOWLING GREEN, O.—For Dr. Matthew Donahue, an instructor in popular culture at Bowling Green State University, a car is more than just a vehicle. In his hands, what most would call a “junker” is transformed instead into an “art car.” Covered in materials from paint to vinyl records to tile, his reimagined creations have been exhibited in art car fairs and parades around the country and are now featured in a book of postcards called “Taking It to the Streets: An Art Car Experience,” published by Jive Bomb Press.

The book is available on Amazon.com and at Grounds for Thought in Bowling Green, Borders and the Toledo Museum of Art.

The prize-winning cars reflect Donahue’s fascination with popular culture and “outsider art,” which also inspires him to be inclusive of those sometimes on the fringes of society. He has involved youth with special needs and in the inner city in the creation of numerous art cars, from the U.S. to Singapore to Scotland. In 1999, he worked with Toledo’s Young Artists at Work, a program sponsored by the Arts Commission of Greater Toledo, to cover a car in tiles.

Every year since 1996, he has exhibited the cars in the largest annual art car show in the United States, in Houston, Texas. One of his Jackson Pollock-inspired works won first prize in the painted car division there in 2003.

The Houston event, with its highly popular dual parades and large participation by children, is close to Donahue’s heart because it is in keeping with his devotion to youth and the arts.

The record car also expresses his longtime interest in music. Donahue is in a band and has been involved in the Midwest punk music scene since the 1980s. He also wrote a book about a legendary Toledo blues music spot, titled “I’ll Take You There: An Oral and Photographic History of the Hines Farm Blues Club,” that was made into a documentary by WBGU-PBS.

As a visual artist, Donahue has long worked in collage, a style he has translated to the art cars. His Map Mobile, co-created with Toledo artist Mark Moffett, is a pickup truck covered in paper maps gleaned from BGSU’s former Map Library. Likewise, the design of the art car titled Car Power, a reflection of Toledo and Detroit’s relationship with the automobile industry, is made up of covers of old automobile magazines that—fortuitously for Donahue—were about to be discarded by BGSU’s Browne Popular Culture Library.

His connection with BGSU’s Sound Recordings Archives and the Browne Library comes not only through his interest but also from the eight years he spent working at the recordings archives under the direction of head archivist Bill Schurk.

Recently he has served as a media consultant for the National Endowment for the Humanities. He has been quoted publications from the Wall Street Journal to the San Diego Union-Tribune.