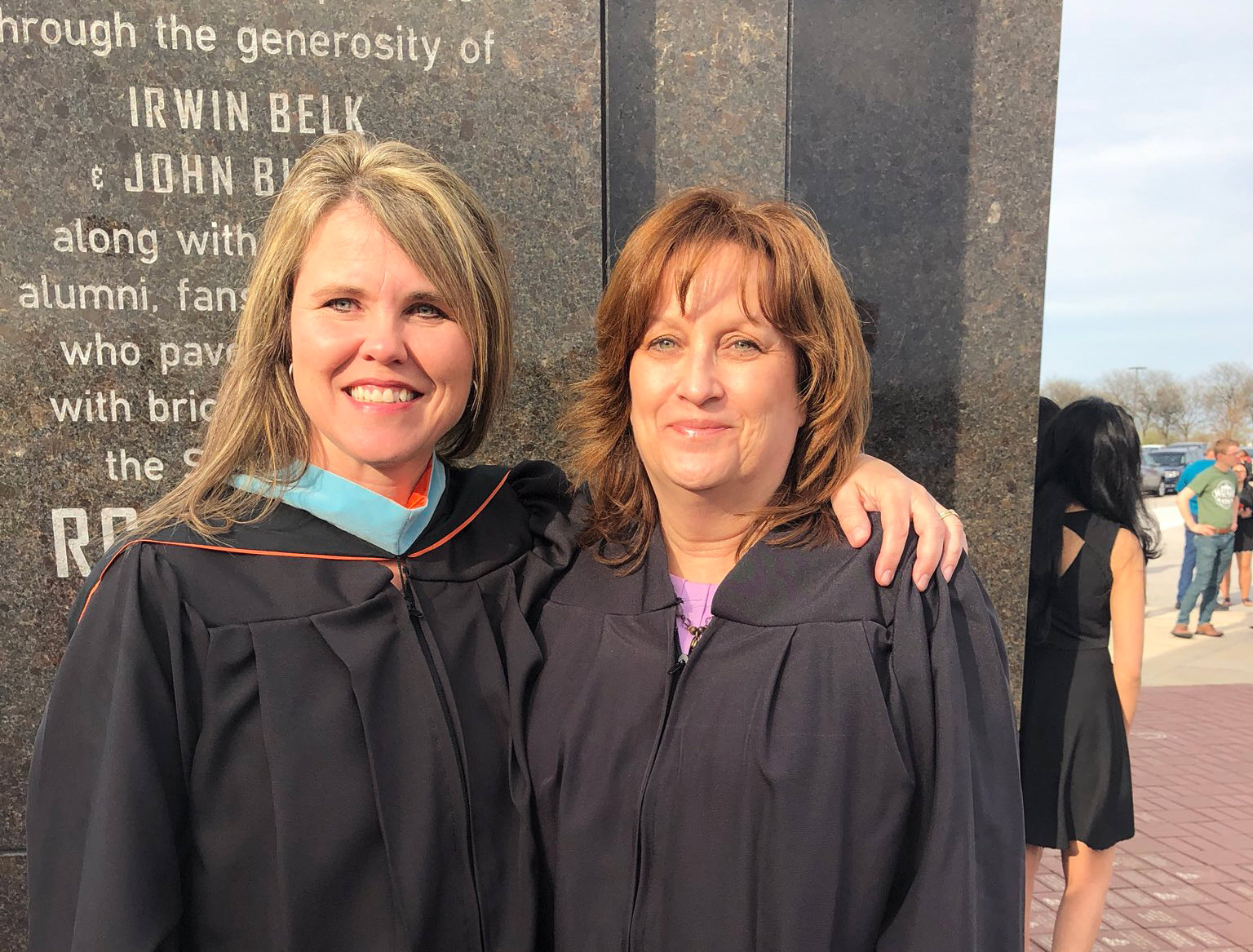 BGSU Customizes Education With its eCampus

Both Diane Dunn and Theresa Boggs went into Bowling Green State University’s eCampus program with the same trepidation —  they were concerned about the unfamiliar format and how they might fare as students who had been away from the education environment for quite some time.

This May, the two women will receive their master’s degrees from BGSU after having completed their work entirely online. And they will arrive at the commencement ceremony as best friends who have never met.

That is the magic of eCampus.

“We’ve been working together on projects and encouraging each other online for years, all through our undergrad and master’s studies, but the first time I meet her in person will be at graduation,” said Boggs, a Bowling Green native who completed her undergraduate degree in the Management and Technology program online and will receive her Master of Education in learning design.

“When you are involved with the eCampus program, you still get to collaborate with other students, you still get to work as a group, but you just never set foot in the same classroom. I consider Diane my best friend, and that friendship developed entirely through our experience as eCampus students.”

Dunn used the eCampus option at BGSU to earn a bachelor’s degree in education, and is also set to receive her Master of Education in learning design.

“I am more than two hours away from BGSU and I’ve never been to the campus, but the eCampus format connects you with your professors, advisers and other students,” said Dunn, an Akron-area resident.

“Theresa and I started at the same time, and we were in similar situations where we wanted to advance our education but we had work, lives and families that complicate things. We became great friends, just like if we had been sitting beside each other in class every day.”

“We are offering more diversity in the program, and we are discussing expanding the eCampus further in the near future,” said Sherri Orwick Ogden, associate director of BGSU’s eCampus. She added that the program focuses on meeting the unique needs of those adult learners with busy schedules and full lives.

“We will continue to offer one-stop-shop services for these students,” she said. “That is what they need, and we are here to serve them.”

For Boggs and Dunn, the flexibility in the format was a requirement, without which they would not have been able to pursue their degrees.

“In my current position, it’s tough to fit anything in when you are working 50 to 60 hours a week and also have a family,” said Dunn, 55, who trains respiratory therapists at Akron Children’s Hospital. “I talked to Sherri, and she put my fears at ease and told me this program was right for me. It turned out that everything I did for school I could apply in some way at work. This program has been great.

“I chose this particular degree because I needed a master’s degree and I am passionate about neonatal and pediatric respiratory therapy as well as education. However, I also wanted something that would broaden future prospects for me. I am not sure what the future holds, but I feel this degree will provide me with more potential opportunities.”

“The professors were terrific and even though you do everything online, I never felt alone. There was a lot of encouragement.”

Boggs, who started with an associate degree from BGSU’s Firelands campus, works full time in the bursar’s office on campus and also has a second job cleaning houses.

“I wanted to get my bachelor’s and master’s degrees, but I am so busy I didn’t know if I could fit it all in,” the 46-year-old said. “I had been out of college a long time and I wasn’t very tech savvy. I thought I wouldn’t do as well — I thought I needed to go sit in a classroom and listen to a lecture. Sherri convinced me there was another way to get my degrees.”

With work and family obligations, the two women said they would often be focused on classwork at odd hours, frequently late at night, but that very flexibility was essential. Ogden said the eCampus program was designed for working adults who need to complete their bachelor’s or master’s degree online in order to advance their careers.

“The program caters to nontraditional students who can’t attend face-to-face classes,” she said. “Many of our eCampus students are working adults with varying work schedules who also are raising families. Coming to campus to attend class just isn’t an option for them.”

“It works for them because we have a variety of start dates and condensed sessions, so we can meet them where they are in their work-life balance,” he said. “Every step of the way, we are trying to make things more flexible for them. We are catering these programs to adults who might be working at different times, or in different time zones, whether they are adult learners or active military.”

A pair of eCampus-affiliated programs are designed for students with an associate degree from the Air Force, providing an avenue to complete a Bachelor of Science in technology in 60 hours or less. About 40 percent of the students currently enrolled in the undergraduate eCampus-affiliated programs are active duty Air Force. They are stationed all across the globe, and one service member traveled from Guam to attend his May 2017 commencement.

Charles Hollingsworth III found that the eCampus provided a path to his bachelor’s degree, and one that was the only viable route for him. As an information technology/quality assurance technician with the Ohio Air National Guard, and the father of two teenage daughters, his responsibilities and time commitments were many, making attending classes on campus impossible. 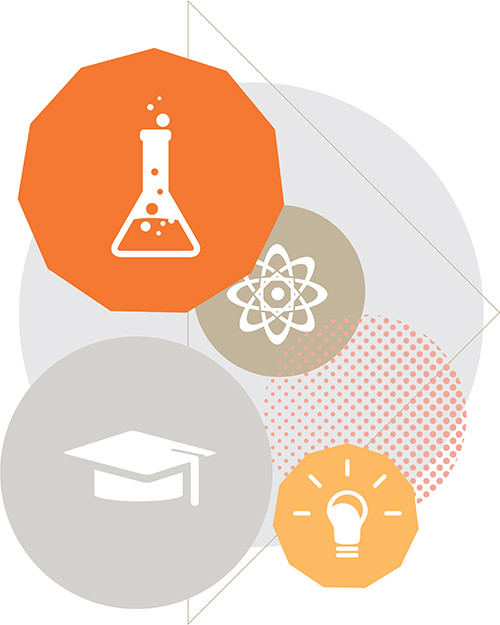 “There was no way that I could go sit in a class and still take care of my obligations,” the Air Force veteran said, “so being at home and doing the work online — when I could fit it in — was really the only way for me to move forward.”

Hollingsworth had an associate degree from the Air Force, and after several efforts to pursue his bachelor’s degree were halted due to work and family obligations, he was able to commit to that goal in the fall of 2015. By utilizing the eCampus program, he received his degree in technology in May of 2017, and is now working toward an MBA.

“I always wanted to get back on track and earn my degree, but it seemed like something always came up and I just never had the method that would fit in with my life, but the online program made it possible,” he said. “To be honest, I would probably not have gone back without this type of program and the flexibility it offers.”

The eCampus was also the ideal fit for Kent Darr, a native of St. Marys, Ohio, who completed the graduate learning design program in May 2017. He found that the eCampus format provided the flexibility he needed as he worked toward his master’s degree.

“I had worked at an online high school after my undergrad days, and I got used to the independence. I didn’t have to set aside a specific chunk of time each day to be physically present in a classroom,” he said. “While I was working toward my master’s, I was able to have a lot more balance in my life, due to the flexibility the eCampus program offers. I had the best of both worlds.”

Darr is employed as an instructional designer at Arizona State University, working on the nuts and bolts aspect of online courses. He is sold on the format’s long-term future in higher education.

“This is a good vehicle for adult learners, due in large part to that flexibility it offers,” he said. “It is ideal for those who can’t go to school full time, or are just not close to campus. It is an affordable model for a lot of people to get their degree, and do it economically.”

For Boggs and Dunn, the eCampus was the ideal route to their degrees, and those career opportunities on the horizon.

“If you had asked me 20 years ago if I could get these two degrees online, I would have said never in a million years,” said Boggs, who added that she has not been in a physical classroom since 1990. “We’re all busy and there’s never going to be a ‘perfect time,’ but the professors were very accommodating and understanding, and the program was great.”

Dunn, who said at first she was “terrified” by the notion of going back to school to get her degrees, will make her first trip to campus for commencement.

“The professors were terrific and even though you do everything online, I never felt alone. There was a lot of encouragement,” she said. “I wasn’t able to be there to get my bachelor’s degree because I had to work, but I’ll be there for the master’s. I already asked for that day off.” 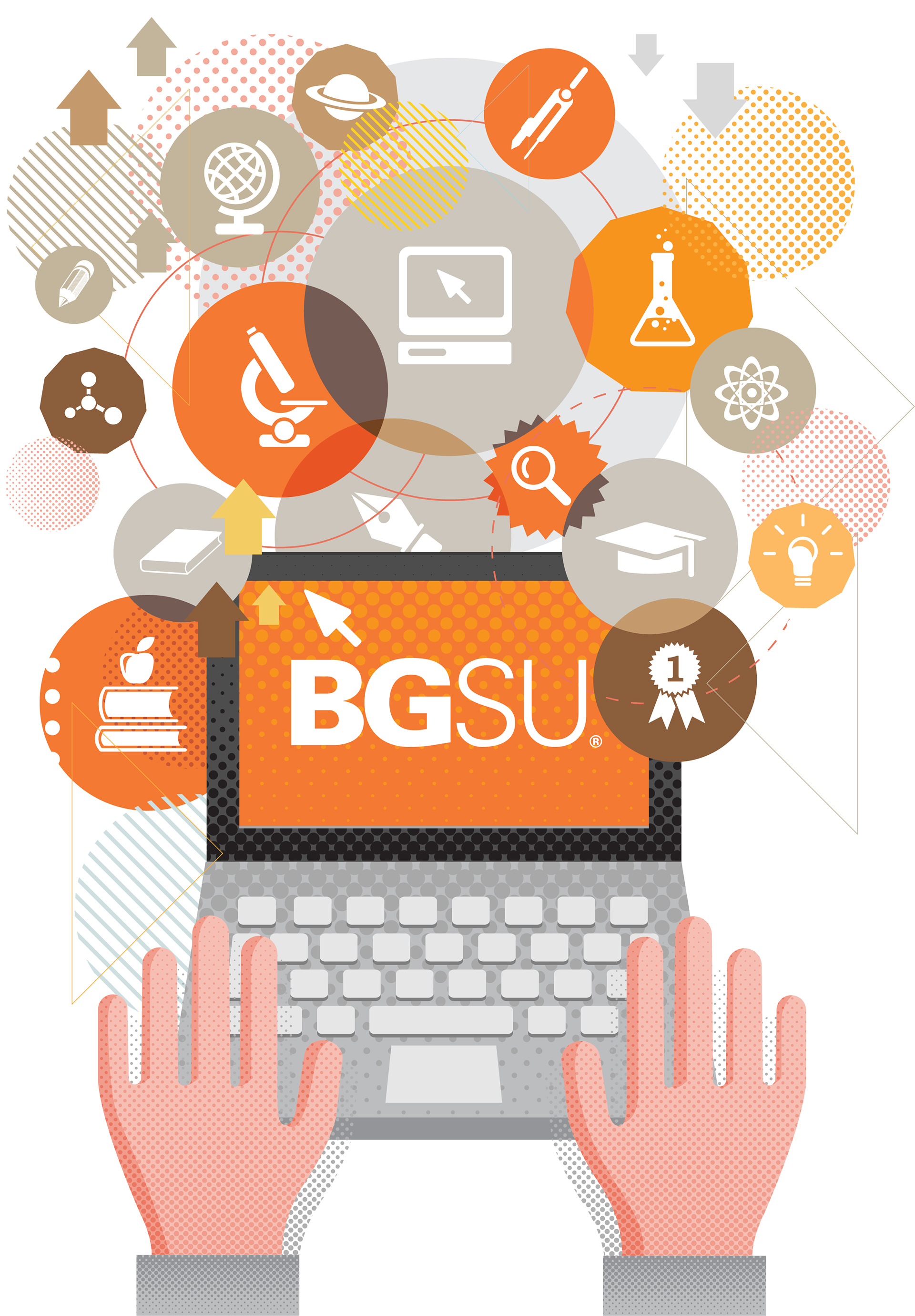