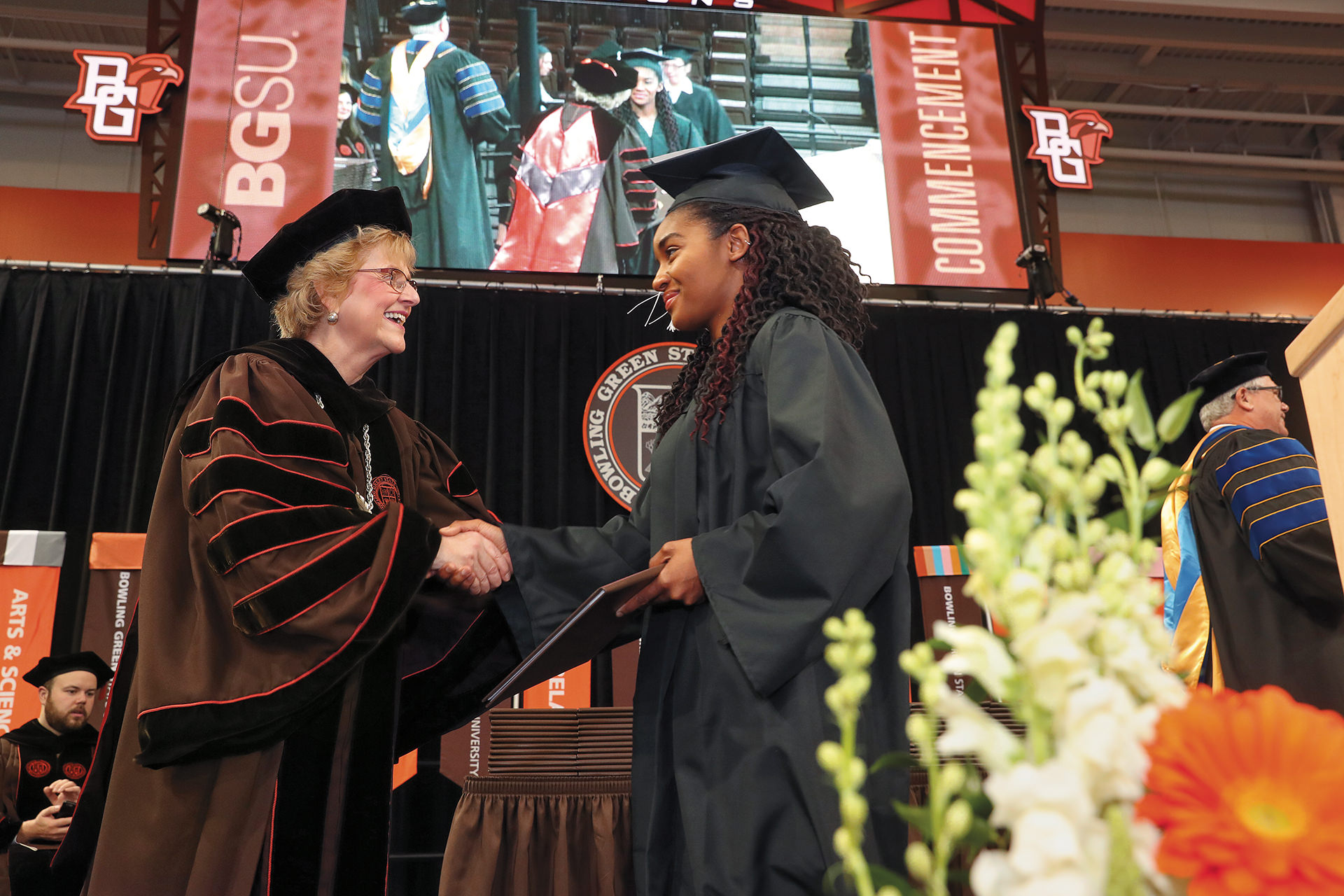 Bowling Green State University President Mary Ellen Mazey stepped down as president Dec. 31, 2017. In recognition of her contributions to the University, the Board of Trustees voted to grant her the title of President Emeritus at its December 2017 board meeting.

Mazey was named BGSU’s 11th president in July of 2011. She came to the University from Auburn University where she was provost and vice president for Academic Affairs. Prior to that, she had served as dean of the Eberly College of Arts and Sciences at West Virginia University, and as dean
of the College of Liberal Arts at Wright State University.

During her tenure at BGSU, enrollment climbed significantly along with the academic profile of the student body. As president, Mazey oversaw more than $500 million in infrastructure improvements on the University’s two campuses – the largest building and renovation program in BGSU history.

The capital improvements included significant investments made by private companies and other public entities through innovative partnerships with the University. Another critical initiative launched under Mazey’s tenure is the Changing Lives for the World Campaign. This comprehensive fundraising campaign has four priorities: scholarships to support students, endowed faculty and staff positions to recruit and retain outstanding educators and coaches, creating state-of-the-art facilities, and named academic programs and units. To date, the campaign has raised $117 million of its $200 million goal.

For students, Mazey may be best remembered for her commitment to their success. More students than ever are engaging in important activities such as undergraduate research, learning communities and study abroad.

Q: What accomplishments are you most proud of during your tenure at BGSU?
A: BGSU has always had a strong academic reputation, so I was so pleased to see the University in the top 100 public universities in the country, according to U.S. News and World Report when I arrived in 2011. I did, however, have concerns about the declines in State Share of Instruction and the student retention rate.

Working with board members and with Cabinet members, we created a strategic agenda that focused on recruiting undergraduate students who could succeed at BGSU. For five years, we admitted the best academically prepared classes at BGSU and ensured they would be well prepared for careers. We also reinforced the concept of a “unique undergraduate experience.” Students feel they belong at BGSU, can stand out while they are here and go far into excellent careers as demonstrated by our alumni. Our internship guarantee, the first such program in Ohio, is of great benefit to students. Our strategic agenda also developed graduate programs that aligned with research strengths in order to increase external funding.

We developed partnerships with businesses and organizations that allowed the University to leverage those partnerships to benefit our students. For example, the partnership with Wood County Hospital created the Falcon Health Center and allowed us to increase our efficiency and enabled us to renovate the Recreation Center without adding additional costs to our students. The partnership with North Star Aviation built new facilities at the airport. As a result, the program has now achieved maximum enrollments. The partnership with the state’s attorney general allowed us to build forensic science academic programming at both the undergraduate and professional master’s degree levels, which has attracted new enrollments to BGSU. As a result of these partnerships, the University was able to freeze tuition for four years.

BGSU has an extensive, and very impressive, campus master plan to build or renovate buildings to enhance the learning and living environments for our students. This plan is also designed to enhance recruitment and retention efforts. I am very proud of the significant accomplishments we made on the master plan during my tenure. It is so gratifying to walk our campuses and see the progress that has been made.

We reached out and formed strong relationships with our alumni and with the faculty association, and they assisted with increasing our enrollments, retention and graduation rates. The University working as “one” moved forward on multiple fronts. We began a comprehensive campaign for BGSU with an emphasis on fundraising for scholarships, facilities, named faculty and coaches positions, and named programs and colleges. To date, we have achieved $117 million of a $200 million goal. The accomplishments are many and it is truly a team effort of many, many dedicated students, faculty, staff, alumni and friends who believe in and support BGSU.

Q: What will you miss most about the University?
A: I will miss the daily interaction with the students and assisting them in fulfilling their dreams of obtaining a college education. Being a part of students’ lives is one of the great joys of university life. Over the last few years, I was able to teach three courses, two of which were sections of our 1910 courses, which are designed for new students. The course “Matching Faces with Places” provided the opportunity for students to meet donors Bob Sebo, Kerm Stroh, Scott Slater and Mike Kuhlin and then tour facilities named for them. A writing assignment focused on how the students might become donors in the future.

Q: What are the challenges ahead for the University, and higher education?
A: The competition for the traditional 18-year-old college student is immense in the upper Midwest. There will need to be greater emphasis on recruitment of non-traditional students, out-of-state students and international students. This will require that academic programming meet the demands of the future workforce and cross-traditional academic disciplines. Professional master’s degrees will be important for the future as well. The use of technology and new teaching and learning methods, both inside and outside of the classroom, is needed. Ensuring diversity on campus is critical. Everyone should appreciate diversity, and dialogue on issues regarding different viewpoints is extremely important.

Q: What are your favorite memories of BGSU?
A: My favorite memories center around commencement ceremonies. It is always so nice to see the graduates and their families celebrating what has been achieved at BGSU. I am always impressed by the students’ dedicated service to the community. Our commencements have had speakers and honorary degrees granted to outstanding alumni who are great role models and demonstrate what one can do with a BGSU degree. There were many athletic accomplishments, including MAC championships and the outstanding academic achievements of our students, that demonstrate the student focus at BGSU. In 2017, we were designated as the most affordable university in the state with the highest academic qualities, which demonstrates the quality of BGSU.

Q: What advice do you have for future and current Falcons?
A: Come to BGSU, get involved in and outside of the classroom and follow your dreams with the degree. You can live the “American Dream” with the BGSU degree as a teacher, innovator, entrepreneur, artist, musician, pilot, computer scientist or wherever your path may lead you. Network with other BGSU alumni and friends and give back with time, treasure or talent.

Q: What are your next steps?
A: Being named President Emeritus was a great honor for me. I will be spending more time with my family and continuing to support President Rogers’ efforts to build BGSU’s strong future.