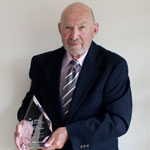 Robert Ludwig launched his first business at age 16 – The Blue Cow hamburger shop. After graduating from Bowling Green State University, he went to work for L-K Restaurants and Motels, the company co-founded by his father.

In 1977, Ludwig successfully led the effort to purchase back the company from the Sara Lee Corporation, which had purchased it in 1969. Serving as its CEO and Chairman of the Board, Ludwig guided the company through a series of strategic acquisitions and sales until his retirement.

Following his passion for golf, Ludwig partnered with his brother to build, operate, and frequently play The Whetstone Golf and Swim Club in Marion, Ohio. The two also started Management Expansion, Inc., a real estate and office management consulting firm that is still in existence.

Ludwig has an equally impressive service record. He is a former Chairman for the BGSU Board of Directors (1995-1998), and Former member of the Board of Trustees (1978-1986).  He was named Man of the Year by United Way of Marion in 1974. He continues to be very active in the Marion area community, being involved with the Chamber of Commerce, Rotary International, United Methodist Church, Family Service Society, United Community Services, and United Way.