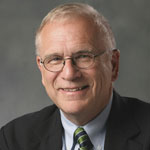 Dr. Gene Poor has had a long history of starting his own businesses, as well as helping others start their own enterprises. He has led a dual life over the past 40 years. . . as a college professor and business entrepreneur.  Dr. Poor came to BGSU in 1970, earning his doctorate in 1973. He started the Visual Communication Program in the College of Technology in 1975, which has become one of the more popular majors on campus.

This division evolved over the next 10 years, and in 1990, Dr. Poor purchased the division and launched LifeFormations, Inc. Over the past 20 years, LifeFormations has become a world leader in the creation of lifelike figures and dioramas for museums, visitor centers, retail outlets, and theme parks. LifeFormations is considered a leading force in the creation and evolution of animatronic figures.

Dr. Poor is currently the Chairman of the Board for LifeFormations, and continues to teach and inspire future entrepreneurs in his role as the Hamilton Professor of Entrepreneurship at BGSU.