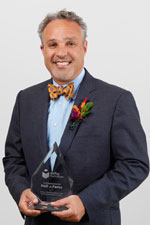 Bassel Ojjeh has enjoyed success throughout his career as a data practitioner and advocate, including pioneering development roles at software and search engine giants and the launch and management of three successful start-up companies. But his earliest entrepreneurial ventures began at Bowling Green State University.

Bassel is currently Chief Executive Officer of nPario, Inc. Before co-founding nPario, he served as Senior Vice President of Strategic Data Solutions, a division of Yahoo. He was promoted to that position after Yahoo acquired his previous venture, the DMX Group, a business intelligence and data mining company.

Bassel co-founded digiMine (now Audience Science), serving as Chief Operating Officer and delivering products and services to Fortune 100 enterprises, including American Express, Daimler-Chrysler, Microsoft Corp, and others. Prior to digiMine, he played a key role with Microsoft for 10 years. He was one of the original developers at Fox Software in Ohio and was the recipient of the BGSU's Graduate of the Year Award due to his business leadership.

Bassel actively supports micro-clinics to fight preventable diseases in low-income populations. Seven years ago, he founded the International University of Science and Technology, the first private institution in Syria that delivers instruction in the English language. The university currently has approximately 4,500 students.