Computerized Multimedia Classroom (CMC) is a historical innovation at BG. For the first time in the school’s history, students studying non-Roman font languages such as Chinese,Japanese, or Russian, can listen to, read on the Internet, and write on a computer in their respective target languages. The iMacs can play video movies/clips using Quicktime, Real Player and Windows Media Player. In addition, students can burn CDs of their voice recordings or other digital works. The CMC, however, does not only consists of computers but is also equipped with a DVD/VCR deck and a Set-Top Box connecting WBGU’s streaming video TV in German, Chinese, Japanese and French. Also, a Zone-Free DVD player for DVDs originating outside the western hemisphere is available for use by instructors.

The Listening Center (LC) is the heir to the old Language Lab. Instead of using cassette tapes or analog tape players, the new LC uses digitized sound files hosted on the LLC’s audio files server. Using a web browser interface, students can retrieve and listen to the the audio files which are in mp3 format. Faculty have also put foreign language DVDs on reserve in the LC for their students for “cultural enhancement.” In the LC, students can also make mp3 format voice recordings for reviewing and grading by faculty. 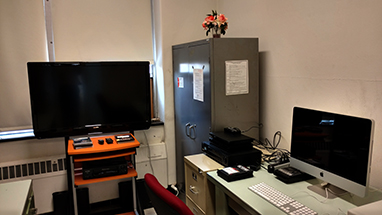 The Video Viewing/Media Processing Area is currently located at Room 008, Khol Hall. It is equipped with a projector, a screen, a DVD player, a VHS player, a streaming video receiver and a set of video digitizing devices. Hookups for both the Internet and the LCD projector are available. Students and instructors are allowed to use this area to preview video teaching materials or to convert analog video/audio materials into digital formats for teaching purposes.