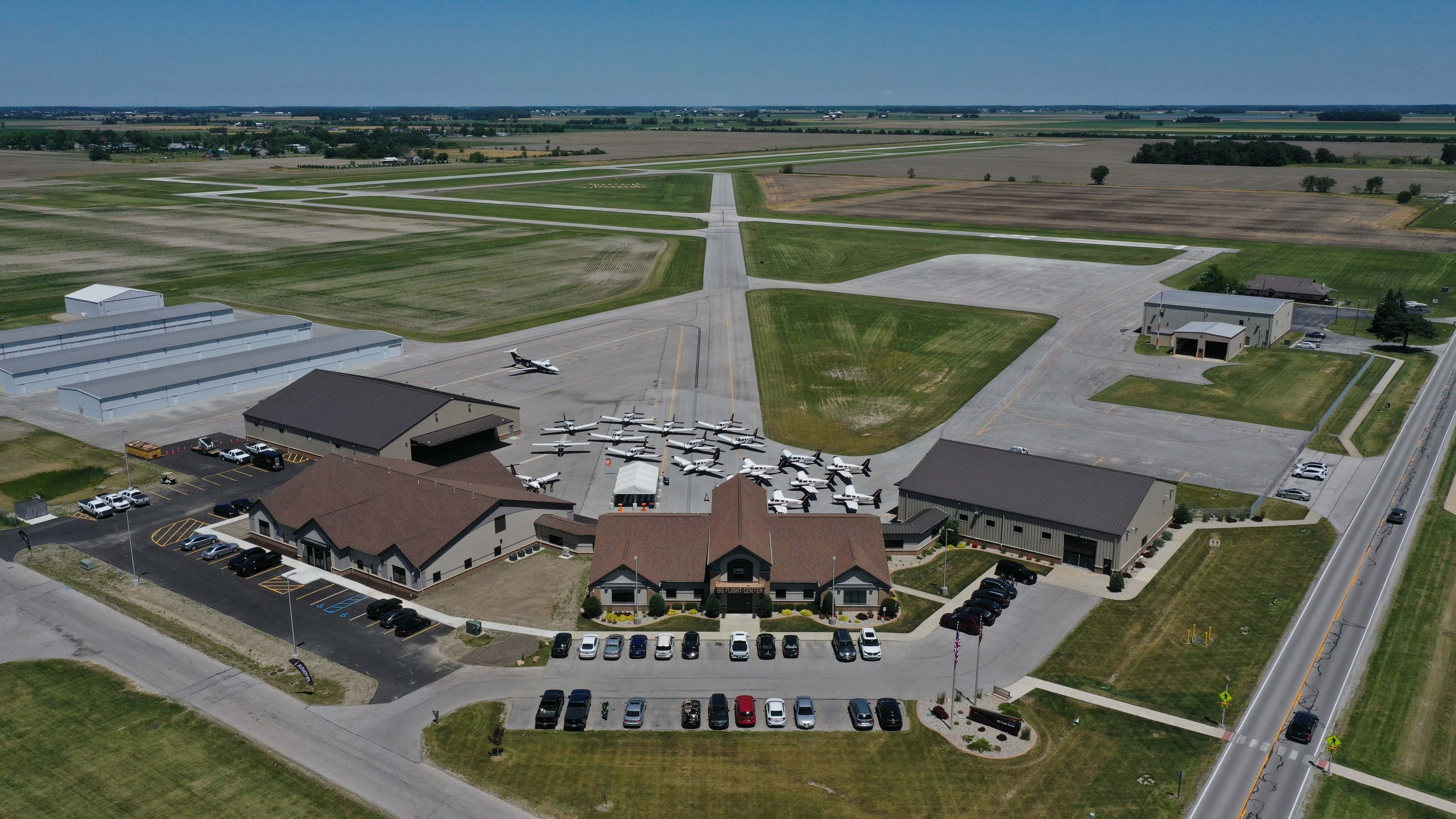 In the midst of an ongoing national pilot shortage, the Bowling Green State University Board of Trustees at its June meeting celebrated the expansion of the BG Flight Center, which will address workforce needs and provide highly trained pilots for the airline industry. The $5 million investment more than doubles the center's flight operations, classroom and office space.

Under the direction of new Chair Marilyn Eisele '79, the board also welcomed a new vice provost and dean of graduate and professional programs and adopted general and operating budgets for fiscal year 2023.

With nearly 400 students in the program, BGSU is now home to the largest aviation program in the state of Ohio, one of the largest in the U.S. and one of the few academic programs with an airport on the land of its campus.

In the span of just seven years, from the 2014-15 to the 2021-22 academic years, the number of students and employees more than tripled and the fleet doubled, a sign of rapid growth.

Due to constant demand from the aviation industry, the University’s capability to train students and a key public-private partnership between BGSU and North Star Aviation, officials on Thursday cut the ribbon on a new, expanded training facility that will better serve students as they prepare to take to the skies.

North Star, which owns and operates the BG Flight Center, committed more than $5 million to upgrade the facility, a continuation of a partnership with BGSU that has been mutually beneficial since first agreed upon in 2015.

"This $5 million expansion certainly demonstrates our shared commitment to address a critical workforce need of today," BGSU President Rodney K. Rogers said. "It's what public universities need to be doing each and every day: addressing the global pilot shortage along with other professionals in the aviation industry."

The expansion will more than double flight operations, classroom and office space, and upgrades include 11,000 square feet of space, including bigger simulation rooms, modernization of its fleet, two new precision flight controls and the addition of a L3 Harris’ CRJ 900 jet simulator, which the program did not offer previously.

The simulator is the same one used by commercial airlines, while the other simulators are exact replicas of the Piper Archer and Piper Seminole planes used by BGSU Aviation.

The larger area will allow more room for flight prepping and flight planning, private spaces for exams, and three classrooms on site that allow students to take their classes and begin “pre-flighting” without having to traverse campus first.

Additionally, the upgrades will allow for future expansion, including room for at least two more flight simulators and ample space for more students.

New vice provost and dean for graduate and professional programs

After a competitive national search, trustees appointed Dr. Jennifer Waldron as the new vice provost and dean of graduate and professional programs. Waldron was also granted tenure and full professorship in the School of Human Movement, Sport and Leisure Studies. She will start at BGSU on July 11.

Currently, Waldron serves as associate vice president of research and innovation and dean of the Graduate College at the University of Northern Iowa, where her responsibilities include strengthening enrollment, recruitment and retention strategies, and advancing the university’s strategic plan for scholarship, research and creative activity. She also serves as interim dean of online and distance education.

"I look forward to working with Dr. Waldron to create a bold vision for the future of graduate and professional education," said Joe B. Whitehead Jr., provost and senior vice president for Academic and Student Affairs. "Dr. Waldron will cultivate and maintain strong relationships with stakeholders across campus; develop resources that will deepen support for graduate education; continue to build and strengthen the University's diverse and inclusive graduate community; and enhance graduate student success and well-being."

Waldron holds a Ph.D. in kinesiology from Michigan State University and is also a proud graduate of BGSU, earning her master’s in developmental kinesiology.

Trustees adopted the University's general and operating budgets for fiscal year 2023, which include a 3.7% increase in share of state instruction by the State of Ohio.

Portions of funding will be used for continued investment in in-demand academic programs, including roughly $909,000 for the all-new Doctor of Physical Therapy (DPT) program which will welcome an inaugural class of 90 students this fall. An additional $250,000 was also allocated for overall scholarship support, ensuring that a BGSU education remains affordable and of great value for students.

The only of its kind in Ohio, the two-year accelerated and hybrid DPT program draws students from around the country and allows most coursework to be completed online outside of hands-on clinical practice held on campus twice per semester.

The launch of the DPT degree comes at a time when people are relying heavily on health care providers due to the COVID-19 global pandemic. Meanwhile, demand for physical therapists is also set to grow 18% from 2019 through 2029, according to the Bureau of Labor Statistics.

The board recently elected Marilyn Eisele '79 of Shaker Heights, Ohio, as its new chair.

Eisele assumes her role after serving on the BGSU Board of Trustees under David O'Brien who was appointed chair in June 2021. She has served as a trustee since December 2015 after being appointed by former Ohio Gov. John Kasich.

“We are so fortunate to have alumna Marilyn Eisele as the next chair of the Board of Trustees," Rogers said. "Since her appointment as trustee in 2015, Chair Eisele has helped move our University forward to ensure we create public good. As president, I appreciate the work of former chair of the Board of Trustees, David O'Brien. We made so much progress as a University during his term as chair, and BGSU is positioned for future success.”

A proven business leader, Eisele is currently the chief financial officer of Miller Tanner Associates, a global meeting planning company that provides comprehensive meeting planning services for the pharmaceutical, biotech and medical device industries and large corporations. Eisele earned a bachelor of science in business administration from BGSU in 1979 with a major in accounting.