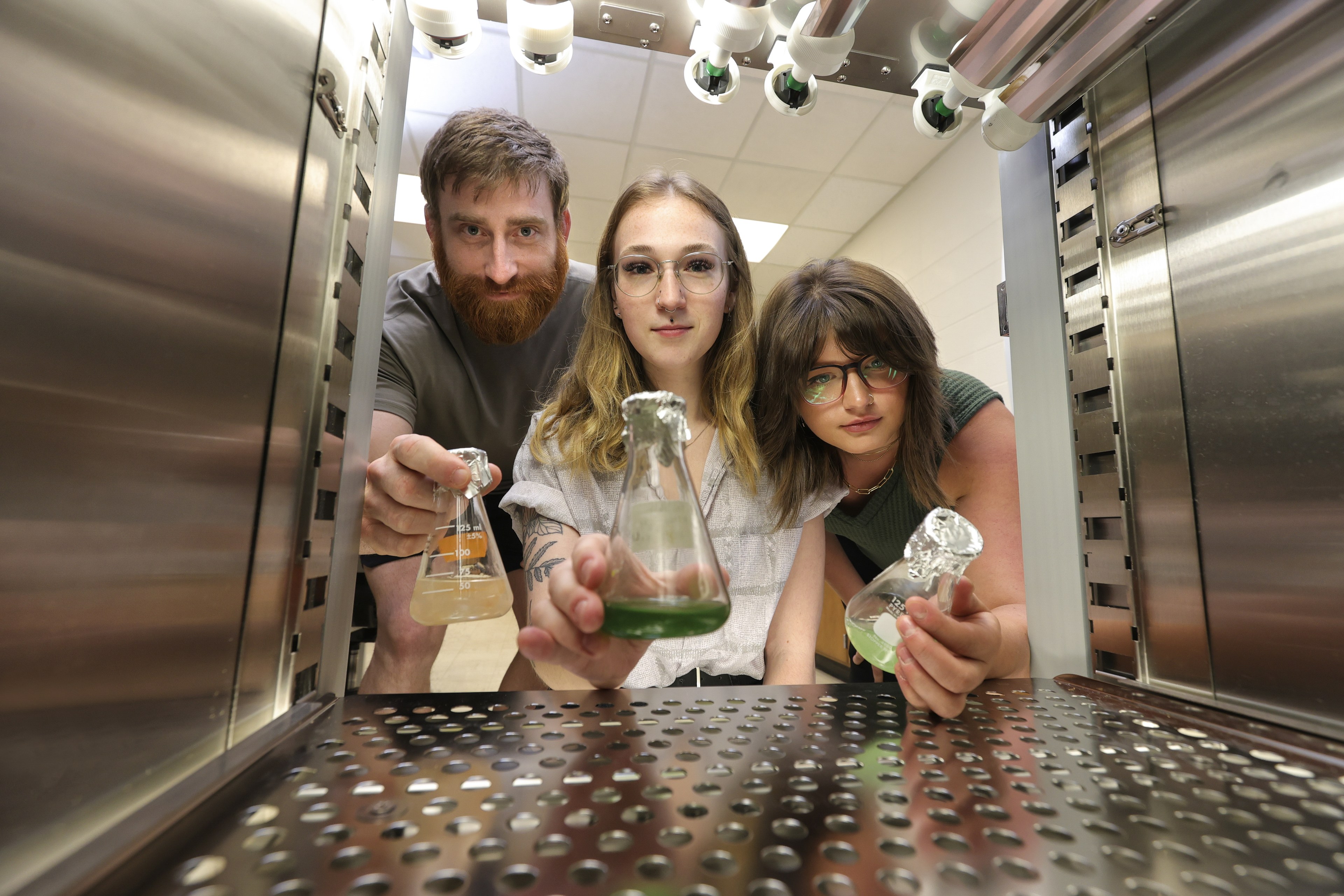 Recent BGSU graduate Ryan Wagner, doctoral student Kate Brown and graduate student Katie Barker are conducting their own water-quality research and collaborating with other scientists on a trip to Kenya, where a BGSU-led team is studying toxic algal blooms in Lake Victoria. (Craig Bell / BGSU)

As a team of Bowling Green State University researchers travel to Kenya, two BGSU students and one 2022 graduate are not just tagging along – they’re performing individualized, high-level research of their own into a scientific issue that greatly impacts every day human life.

First-year Biological Sciences doctoral student Kate Brown, second-year Master of Science in Biology student Katie Barker and Ryan Wagner ’22, who recently completed a Master of Science in Biology, are all accompanying faculty to Kenya to conduct their own research projects, collaborate with other researchers and contribute to water-quality knowledge in an under-researched part of the world.

The purpose of the trip is to study Lake Victoria, Africa’s largest freshwater lake, which experiences toxic algal blooms very similar to those in Lake Erie.

Dr. George Bullerjahn, an emeritus professor of Biological Sciences and the director of the Great Lakes Center for Fresh Waters and Human Health, said the BGSU faculty provided guidance in developing student research projects, but the students themselves will be an integral part of the work in Kenya.

“They’re not assisting – they’re actually driving the work,” Bullerjahn said. “We’re starting with the approach that they’re the boss, and we’re there to facilitate things.”

Barker, Brown and Wagner all chose BGSU to pursue postgraduate degrees because of the school’s faculty research expertise on the topic, which has been an issue of significant public interest since a 2014 toxic algal bloom temporarily made water from the western Lake Erie basin undrinkable.

As students, they have had the opportunity to not only study the biology behind algal blooms, but also conduct research into it themselves.

While researchers have investigated Lake Erie extensively, there has been very little research into Lake Victoria’s blooms. Barker is applying the same portable technology she uses in northwestern Ohio to Kenya by identifying cyanobacterial toxins in the field, which provides researchers with quick, reliable data that does not require transportation to a lab.

“I normally look at Sandusky Bay, Lake Erie and then some smaller surrounding lakes that have bloom issues, so I’m essentially transferring what I do to Lake Victoria,” Barker said.

Together, Brown and Barker are compiling a large dataset that will track nutrient, toxin, chlorophyll and genomic data that aims to provide a more comprehensive view of the entire bacterial community, which then could serve as a launching point for future researchers who would not have re-collect massive amounts of data.

“It’s nice when you have a bigger picture,” Barker said. “When you can go into it saying, ‘We know this toxin is here or this species is here, and these are the environmental conditions,’ you can start to paint a bigger picture of what might cause different conditions, whether they be toxic or not.” 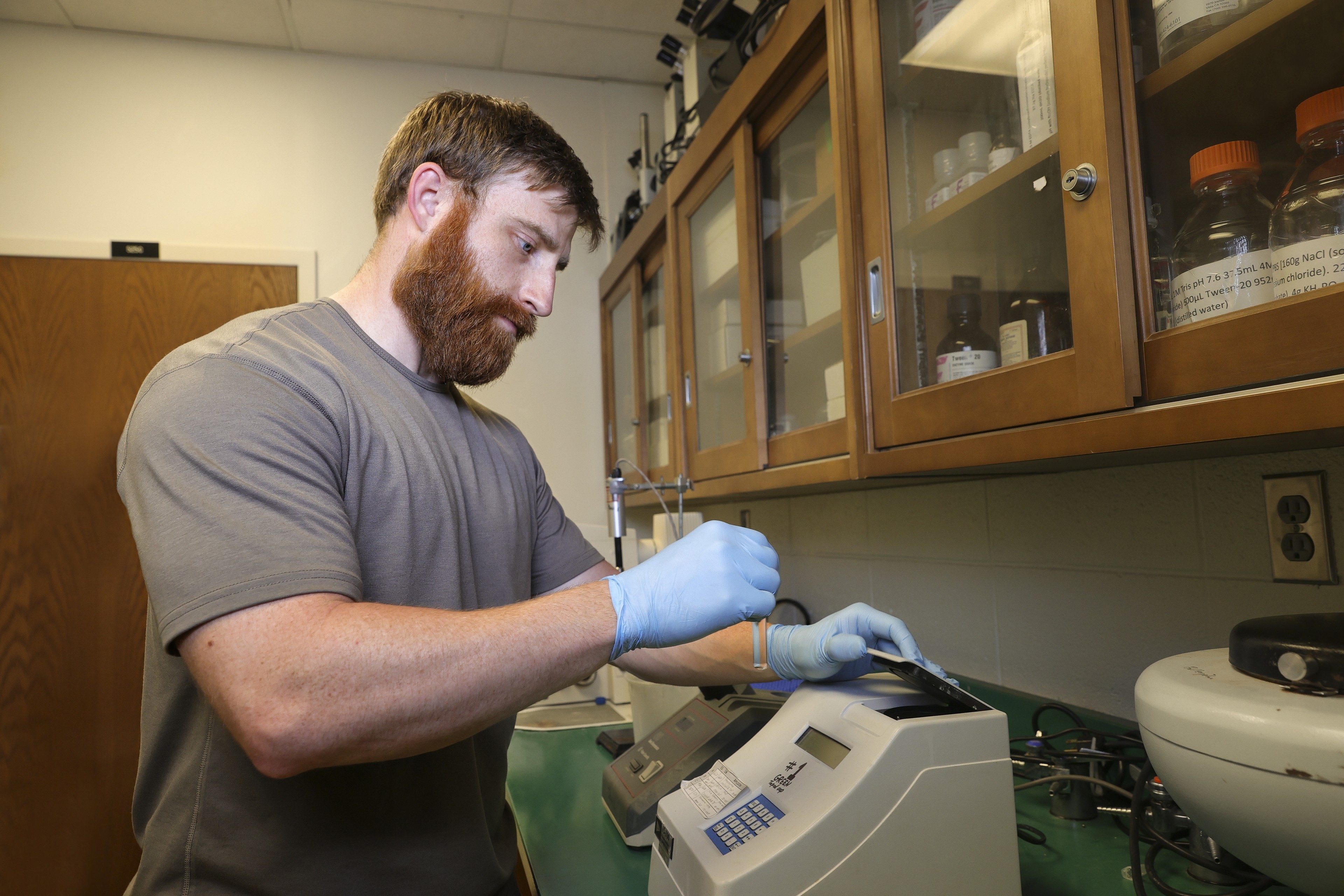 In Kenya, Ryan Wagner '22 will be testing water samples for fungal parasites and studying the role of viruses, which played a key role in the 2014 water crisis in the western Lake Erie basin. (Craig Bell / BGSU)

As a graduate student at BGSU, Wagner’s research focused on fungal parasites, which he will continue in Kenya by looking for their presence in Lake Victoria.

Wagner will also be searching for the presence of viruses in Lake Victoria, which played a large role in the 2014 Lake Erie bloom. Though Kenya has significant climate differences when compared to the Lake Erie watershed, the bacterial communities in the two bodies of water are comparable.

Wagner said the study into fungal parasites is an under-researched topic, and that the presence of certain viruses may trigger the release of toxins from cyanobacteria, which northwestern Ohio experienced eight years ago.

“It’s similar to what happened to the Toledo water crisis, which was a viral lysing event,” Wagner said. “Viruses lysed open the cyanobacteria cells, which released toxins and caused the drinking water crisis, and Lake Victoria has very similar communities. I’m going to be looking for the presence of viruses and seeing if that has an effect on the communities and toxin production there.” 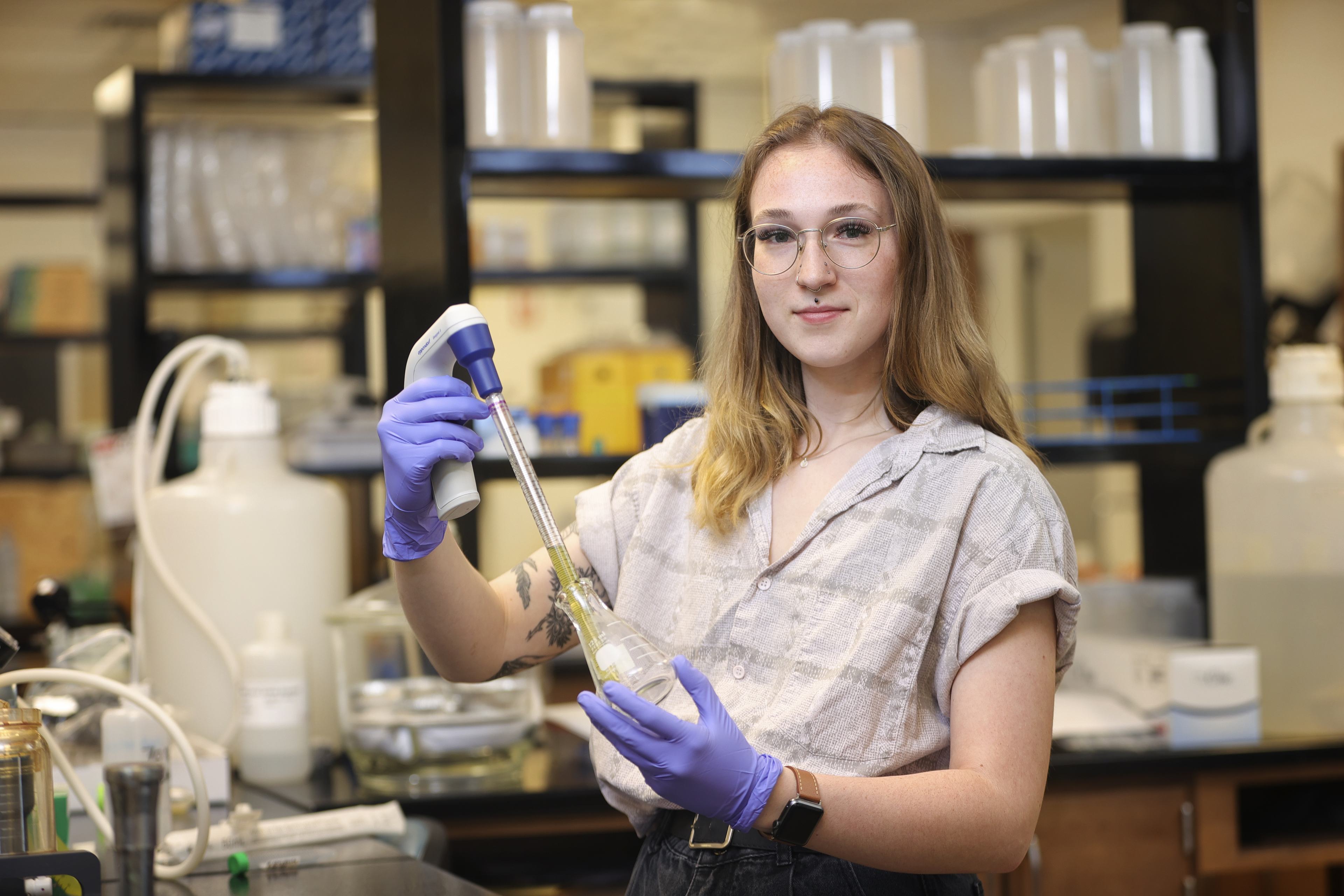 First-year doctoral student Kate Brown is in the process of developing portable, easy-to-use infield technology with the hopes of detecting signs of a toxic algal bloom before it happens. (Craig Bell / BGSU)

Though researchers know that nutrient excesses cause blooms, there is not much existing research in algal genotypes as it relates to their toxicity.

In Lake Victoria, Brown will be studying DNA and RNA data to explore how bacterial communities function, which could give researchers a better understanding of when toxins are likely to be made.

“With the genomic data, I’m also going to look at the DNA composition of the community, so I’m going to be looking for toxin-related genes that signal toxins could be made at any point, even if they’re not there at the moment,” Brown said. “When we do a lot of this sequencing, we’re going to come up with bacteria other than cyanobacteria, and we can look into how the community functions as a whole.”

Additionally, she will be taking samples for another research project that deals with detection. Brown is in the process of developing portable, easy-to-use infield technology that can do semi-quantitative counts of common types of cyanobacteria.

The massive amount of data collected in Kenya will provide more information about overall algal community composition, which could lead to sharper detection methods.

“We’re going to connect all these dots and look at what in the composition is connected to toxins, any gene data, and then I’m going to use that to build out my dataset in terms of the portable technology I’m developing as well,” Brown said. “Hopefully, there will be a really low-detection limit where we can catch blooms before they become a problem.”

Collaboration will also be a key part of the journey, as the BGSU team will work closely with researchers from Kisii University in Kenya as well as a North American cohort of researchers contributing to a topic that impacts everyone.

Though the research is a world away from Lake Erie, Lake Victoria’s common issue has the full attention of the BGSU team.

“From bloom dynamics, Lake Erie and Lake Victoria are very similar,” Wagner said. “They have very similar communities despite being in fairly different climates, so we’re looking at both climates to see what differences and similarities there are, and also working with other groups on the science of blooms.

“There is basically no research on Lake Victoria, and it’s clearly an issue that they’re having, so that’s where we’re trying to help.” 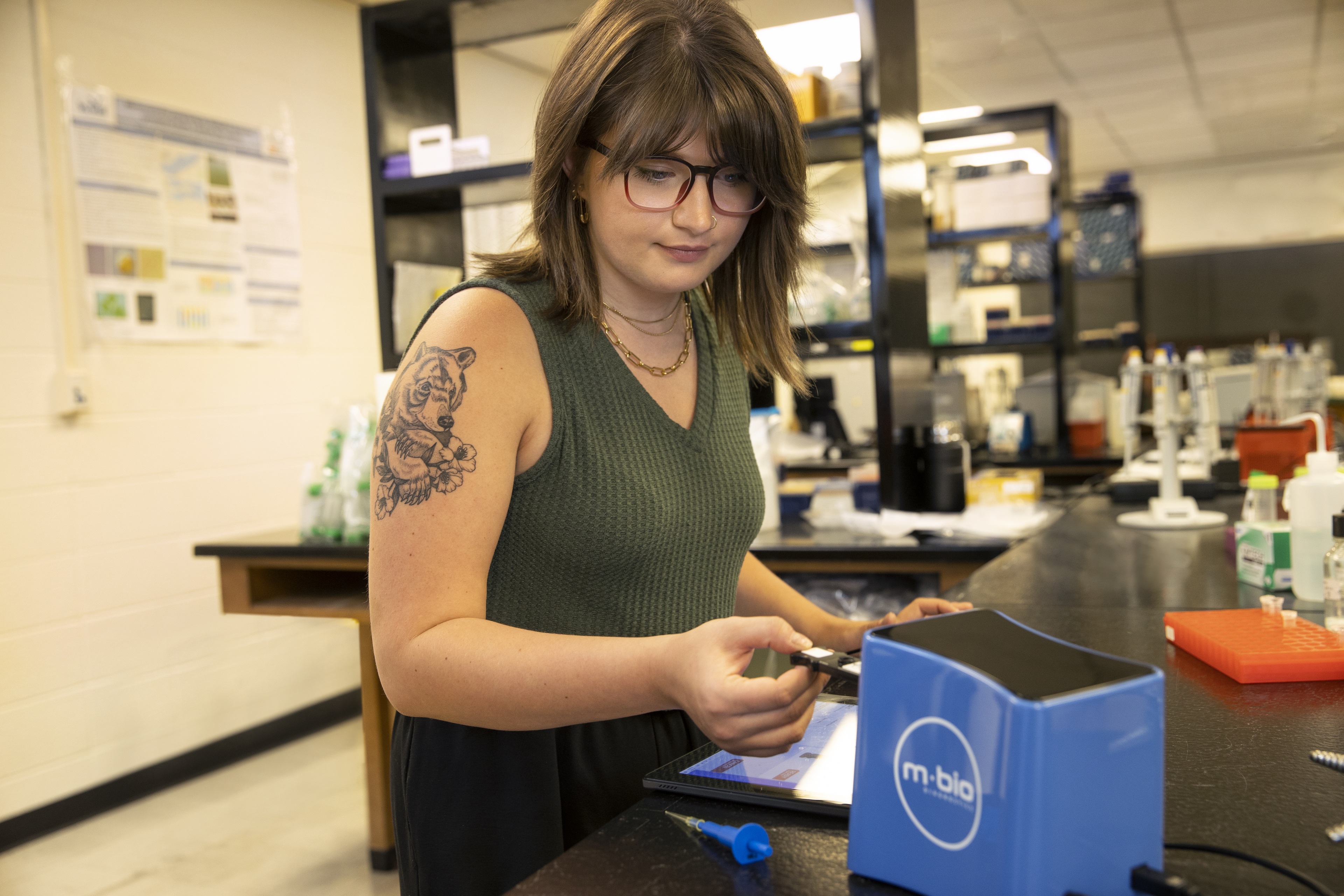