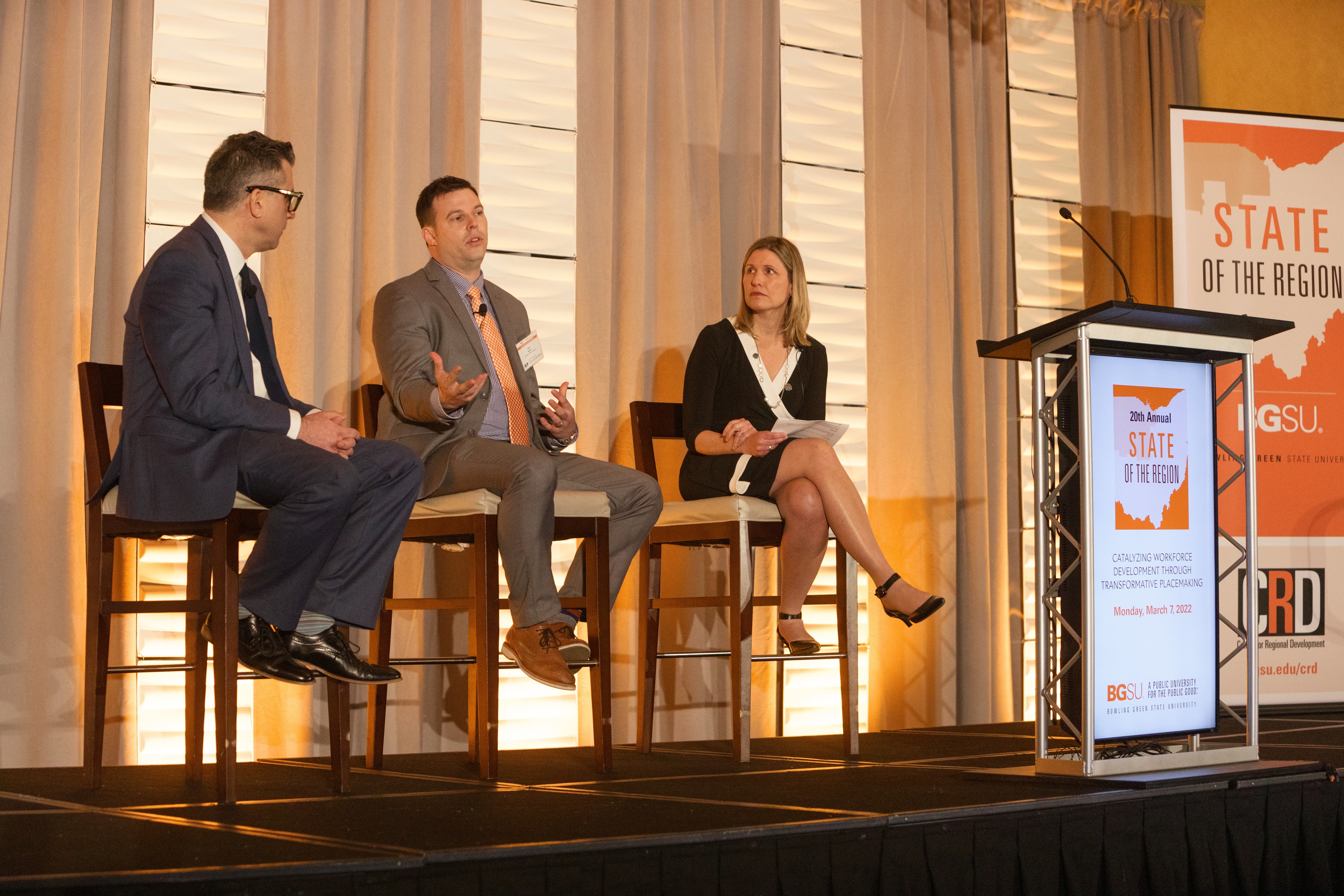 Jennifer Vey from the Brookings Institution moderated a panel discussion with (left-to-right) Marc Folk, president and CEO of The Arts Commission, and Seth Baker, CEO of the Van Wert County Foundation.

As a public university for the public good, Bowling Green State University and its Center for Regional Development (CRD) developed the Reimagining Rural Regions (R3) Initiative. It provides expertise and capacity to assist communities in the placemaking process, identifying assets that could be reimagined in an effort to improve quality of life and to aid in the retention and attraction of talent.

The program’s first cohort communities – Gibsonburg, Marysville and Van Wert – will see implementation of placemaking opportunities and projects this summer with the help of BGSU students. CRD is now accepting applications for the 2022-23 cohort of R3 Communities through April 15. The chosen communities will work with CRD staff beginning this summer, with implementation scheduled for summer 2023.

Visit the R3 webpage for more information and to apply

In the past, economic development focused on job creation, with the assumption that workers would relocate to areas with available jobs. While job attraction and creation remain critical, a new approach is called for as today’s workforce often chooses where they want to live before finding a job.

The Bowling Green State University Center for Regional Development (CRD) held its 20th Annual State of the Region Conference on March 7 in Perrysburg, Ohio, with this paradigm shift at the forefront. The theme for this year’s conference was ‘Catalyzing Workforce Development Through Transformative Placemaking,’ with the goal of exploring how best to implement a more comprehensive, integrated approach to attract and retain workers by improving the quality of life in Northwest Ohio.

Transformative Placemaking is a framework that the Washington, D.C.-based Brookings Institution has been developing and which has already had a significant impact in Northwest Ohio through the CRD’s Reimagining Rural Regions (R3) Initiative. According to Dr. Russell Mills, senior director of CRD, this year’s conference was well attended at a time when community leaders are pondering the challenges of workforce development in a tightening labor market.

“We had a strong turnout for our first hybrid event, including the economic and workforce development professionals we normally see from across the region,” Mills said. “We had over 200 participants in the room and around 100 people joined us via the live stream. I think our topic was timely and on everyone’s mind as we also see this shift in thinking across the country.”

The need for a more holistic approach

In his State of the Region remarks, Mills called attention to several workforce-related developments that point to the need for a more holistic approach to improving the overall quality of life in Northwest Ohio for all people within a more inclusive economy. Mills addressed three key issues of long-term worker shortages, large numbers of individuals exiting the labor force and how the region stacks up against other areas of the country in terms of quality of life.

“The first thing I discussed was that we're going to be facing a shortage of workers for a long time,” observed Mills. “The broader, ongoing issue is that we have a society with fewer people to do the jobs to meet increased demand due to record levels of personal wealth. And we just have no approach or strategy to fix that.”

While that challenge alone would be difficult for any society to deal with, Mills went on to discuss the record number of individuals exiting the labor force, which has seriously compounded the problem. Mills presented data regarding roughly 3.5 million people retiring during the pandemic and its impact on labor force participation rates in the U.S. Increasing competition for a limited pool of qualified workers has also led to wage-based shifts.

“There are going to be jobs that are really difficult to fill as we also see a lot of people move on in pursuit of higher wages. I presented some data that showed the trend of workers taking new jobs and getting higher wages compared to people who stay in their jobs.”

Mills observed that the resulting increased turnover in the labor market is not about people “being lazy playing video games at home” as some have claimed, but more about the pursuit of higher wages in a tightening labor market, along with yet another contributing factor: A record number of new business starts.

Finally, Mills brought up quality-of-life issues, both in reality and as a matter of perception. He called attention to the USDA Economic Research Service’s Natural Amenities Scale. The entire Midwest ranks poorly compared to the Mountain West states, for example. And that's where people are moving to; census statistics over the last 10 years closely correlate with the USDA scale.

“While we have a beautiful environment here, it's not Florida and it's not California or the Mountain West,” Mills said. “So, we're going to need to do some creative things to address that issue through our placemaking efforts.” 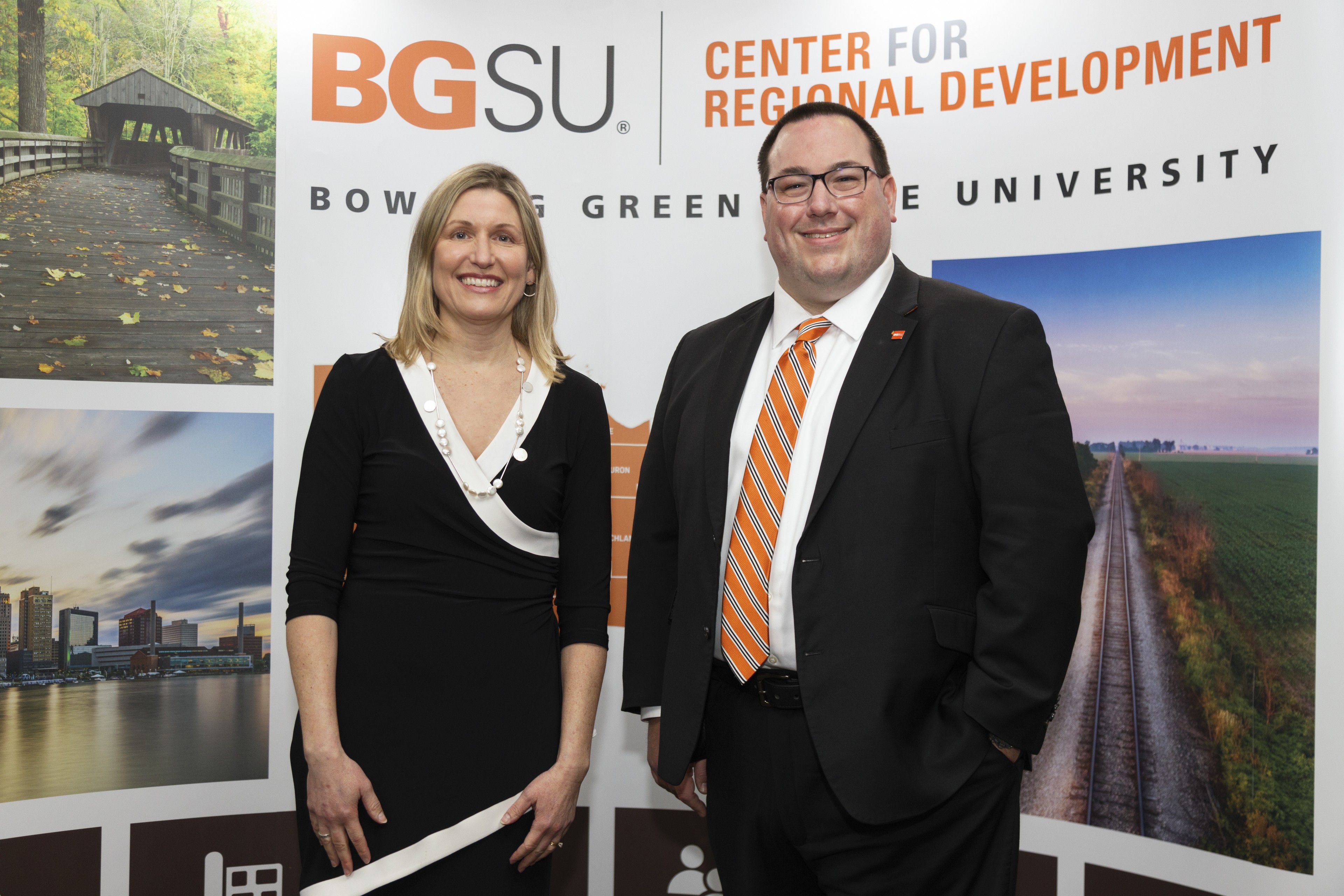 Jennifer Vey, who heads the Bass Center for Transformative Placemaking at the Brookings Institution, was the State of the Region Conference keynote speaker. Dr. Russell Mills, senior director of CRD, posed with Vey at the conference on March 7.

This extensive situation analysis set the stage for the keynote address regarding transformative placemaking by Jennifer Vey, senior fellow and director of the Bass Center for Transformative Placemaking at the Brookings Institution. Vey’s presentation focused on how place-based policies and practices can generate widespread economic, social and environmental benefits.

The keynote was a call for a more thoughtful, intentional and interconnected approach – everything from governance and capacity building to enlisting a wide range of community members to ensure placemaking efforts don’t displace current residents, but rather leverage community strengths with a commitment to equity. Vey provided examples of placemaking executed exceptionally well around the country.

Following her keynote address, Vey moderated a panel discussion that brought transformative placemaking to the local scene while featuring both urban and rural perspectives. The urban framework was represented by Marc Folk, president and CEO of The Arts Commission. His organization’s focus is very much about equity and inclusion, and he shared about The Arts Commission’s community development efforts to create spaces that help address urban poverty.

Joining Vey and Folk was Seth Baker, chief executive officer of the Van Wert County Foundation. Baker discussed how the foundation has bought up vacant buildings in Van Wert in order to build great spaces in downtown Van Wert that will attract businesses and create desirable community spaces. The panel discussion was an audience favorite as both urban and rural applications of transformative placemaking were given a compelling local context.

Importance of communication and regional unity

According to Mills, it’s important to understand and communicate Northwest Ohio’s unique strengths to a wider range of people we want to attract to the region, while reminding those who live in Northwest Ohio of the assets our communities possess so residents can be effective advocates for the region.

“We’ve seen a lot of these placemaking projects that are starting to look the same; sort of like suburban shopping malls that lack a local identity,” Mills said. “We feel it’s important to honor the history and legacy of our region and make sure our placemaking efforts reflect the best aspects of our past. The big public art display on the silos along the river in Toledo is a great example of that.”

Mills also pointed to how vital coordinated regional efforts are to pool community resources for the greatest impact. He sees placemaking as a great opportunity for that.