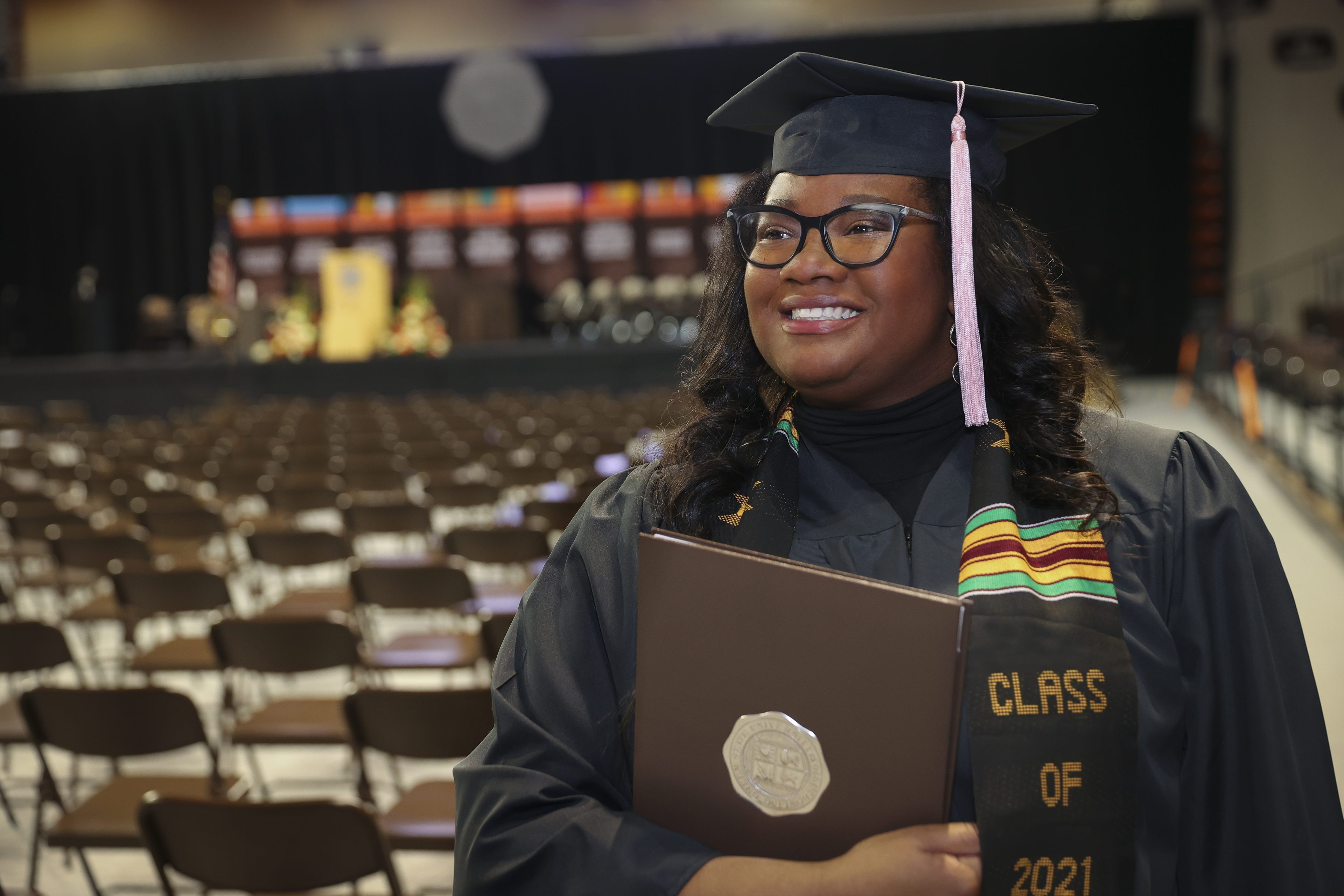 From the commencement stage to the opera house

Sometimes, experiencing something for the first time can open a world of possibilities. That’s what happened when Jhané Perdue visited the Detroit Opera House to see her first opera when she was 15.

“Up until that point, I was not going to go to college for music at all,” Perdue said. “I actually had planned to be a forensics pathologist, but I did music all throughout middle school and high school. I did honors choir, theater and I just sang with my little sisters, just the three of us. We had a singing group, and we would sing for churches and things like that.

“But when I went on a field trip with my high school to the Detroit Opera House to see ‘Aida,’ the first opera I ever saw, I felt like my soul left my body and I was like, ‘This is what I need to do.’ I'm going to do this because Aida was played by Latonia Moore. Black women representation is really important — I didn't see a lot of Black women on stage — so when I saw that, I became very passionate.”

She’s been intensely impassioned about opera ever since — so much so that she graduated this December from Bowling Green State University with a Bachelor of Music in voice performance from the College of Musical Arts.

“I have enjoyed watching Jhané’s progression through her undergraduate degree, as a musician, teacher and leader in the College of Musical Arts,” said William B. Mathis, CMA dean. “She has excelled as a vocalist in the college, participating in multiple ensembles, opera performances and winning the Art Song Competition — always with a humble yet confident demeanor and engaging smile.”

Perdue, who attended Flushing High School near Flint, Michigan, started her career at a university in her home state, but a professor suggested she study under Myra Merritt, professor of voice/opera at BGSU.

“I did my research and got in contact with Ms. Merritt, and it was history from there,” Perdue said. “I just trusted her every step of the way and I am very happy with my choice to transfer to Bowling Green.”

“I have known Jhané since August 2017, when she began her freshman year at BGSU, and it has been an absolute joy working with this very talented and delightful young lyric soprano,” Merritt said. “Over the years, she discovered a rich and beautiful vocal quality that spins effortlessly throughout her range, especially in the upper register. She also developed her self-confidence and determination throughout her tenure at BGSU, and her talent has not gone unnoticed.

“Jhané is an exceptional student who thrives on acquiring knowledge in most subjects, but especially music and her voice. She is one of the most talented students I have ever had the pleasure of teaching, and I am expecting great things from her in the future. Remember her name because she is destined to have a wonderful future operatic career.”

Perdue said there were so many opportunities to perform at BGSU and the surrounding areas that she can’t imagine other universities being able to match the experiences she had at BGSU.

Through the CMA, she was able to make connections at the Toledo Opera, specifically with Kevin Bylsma, co-artistic director and head of music preparation, and classical opera singer Carli Miller.

“I had the opportunity to work professionally in the chorus with Toledo Opera,” Perdue said. “Kevin coached me and gave me lessons; he played my recital, things like that.”

She met Miller, a resident artist for a time with the Toledo Opera and now the executive director for the Pleiades Project in New York, and they connected.

“We sang the same part, and she gave me an internship,” Perdue said. “All of last year, I was an intern for the Pleiades Project, an all-women opera company based in Manhattan, performing remotely. I learned a lot about managing social media grant study in the opera field, basically creating your opportunities with digital opera.”

In addition to performing an estimated 30 times per semester at BGSU, Perdue continued to keep busy by pursuing her passion.

In March, Perdue was awarded first prize in the undergraduate division of the Conrad Art Song Competition, held annually at the University during the spring semester. Students who compete in this highly demanding competition are judged on the mastery of art songs sung in foreign languages, especially Italian, French, German and from the classical and romantic periods; songs from the 20th Century; and as songs by a living composer.

Performers are judged on technical, interpretive, musical and language skills, as well as collaborative ability. She was awarded second prize in 2020.

In 2019, Perdue was awarded the first prize in the Great Lakes Regional NATS auditions in the Upper College Women division. She also was a soloist for John Rutter’s Requiem with members from the Flint Symphony Orchestra and Flushing Alumni Chorus. In the spring of 2019, she was a guest soloist with the Detroit Spiritual Festival.

Some of her accomplishments also include being the soloist for the Africana Student Studies Research Conference (2018-2019), for the Flint Symphony Orchestra’s Christmas Holiday Pops Concert (2019) and for the BGSU Belle Voix (2019). She premiered with the BGSU MicroOpera “The Wanderer, the Guide, and the Beasts of the Mind,” playing the role of Lion (2019). In addition, she was the understudy for the role of Iris from Handel’s “Semele” in April 2019 with Bowling Green’s Opera Department.

“I love working with new music and having colleagues that are my age and being able to work with a living composer that shares the love of music with you and to be able to hear their insight, their details and the things that they want to do for their work and then being able to present that to them,” Perdue said.

She also excelled outside of opera.

“I had the opportunity to sing with Voices at BGSU, which is a spiritual company,” Perdue said. “I did that for two or three years when I first got there, and that was a great experience. I'm very passionate about Black music, so I love being surrounded by people who are also passionate in singing and making music. We went to the Detroit Spiritual Fest and won two years in a row.

“I met George Shirley, a very famous Black tenor, and Daniel Washington, who also is a very famous baritone. I also met and worked with Dr. Lori Celeste Hicks ’04. Being a part of Voices really helped shape my experience at BGSU; I made connections and friends and I got the opportunity to talk to new people and make music with people. It was great.”

Perdue believes BGSU has put her on a path to personal and career success that would have been difficult to match at other universities.

“I feel Bowling Green is a very unique program because there's a lot of one-on-one attention between faculty members and students,” she said. “I feel like my name was put in the forefront in many different areas. That would not have been the case at other universities, because most of those programs focus on graduate students a lot more than undergraduates.”

Perdue, who is auditioning for graduate schools, recently was hired to work full time for the Pleiades Project. She also is a faculty member at the Flint School of Performing Arts as a voice instructor. Perdue is cultivating a competition in February for the second year in a row that focuses on Black music by Black female composers.

In addition to her growth as a scholar and a performer, Perdue attributes BGSU with her personal development.

“Bowling Green presents so many opportunities to grow as a musician and as an artist, but I also have made long-lasting relationships,” she said. “Not only is BGSU a great place to grow as a musician, but also as a person. You will have every opportunity you want, and the faculty and other members of the University will try their hardest to give it to you, and I think that's something beautiful.”