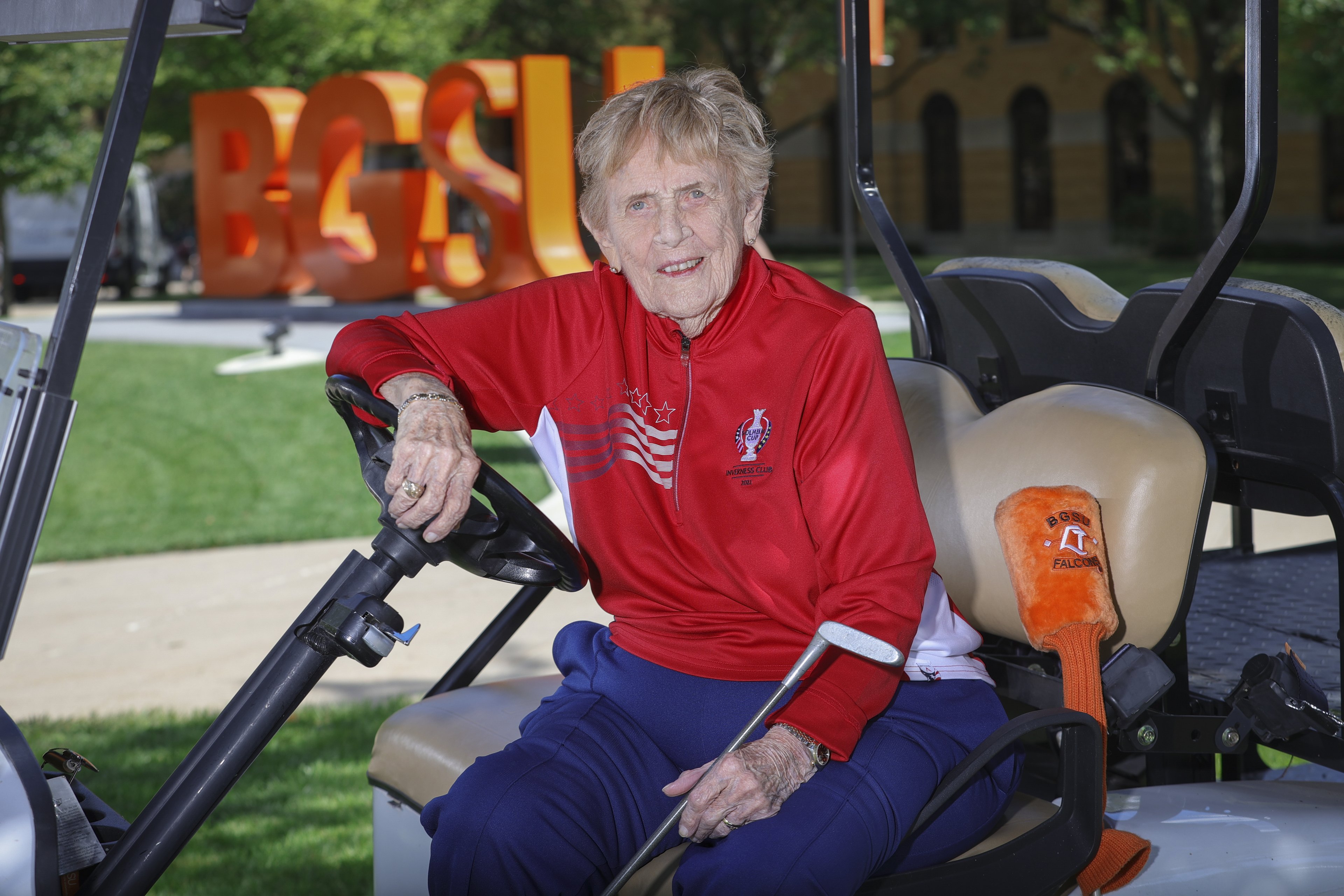 Trailblazer for women’s golf an inspiration for Falcon team

When Shirley Spork was a young girl, her family moved to Detroit, right next to Bonnie Brook Golf Club. It’s a game that would become her life’s passion.

At 94, golf still consumes her life.

Spork returned to the area this fall for the 2021 Solheim Cup at Inverness Club in Toledo as golf royalty. After all, she was one of 13 co-founders of the LPGA in 1950. 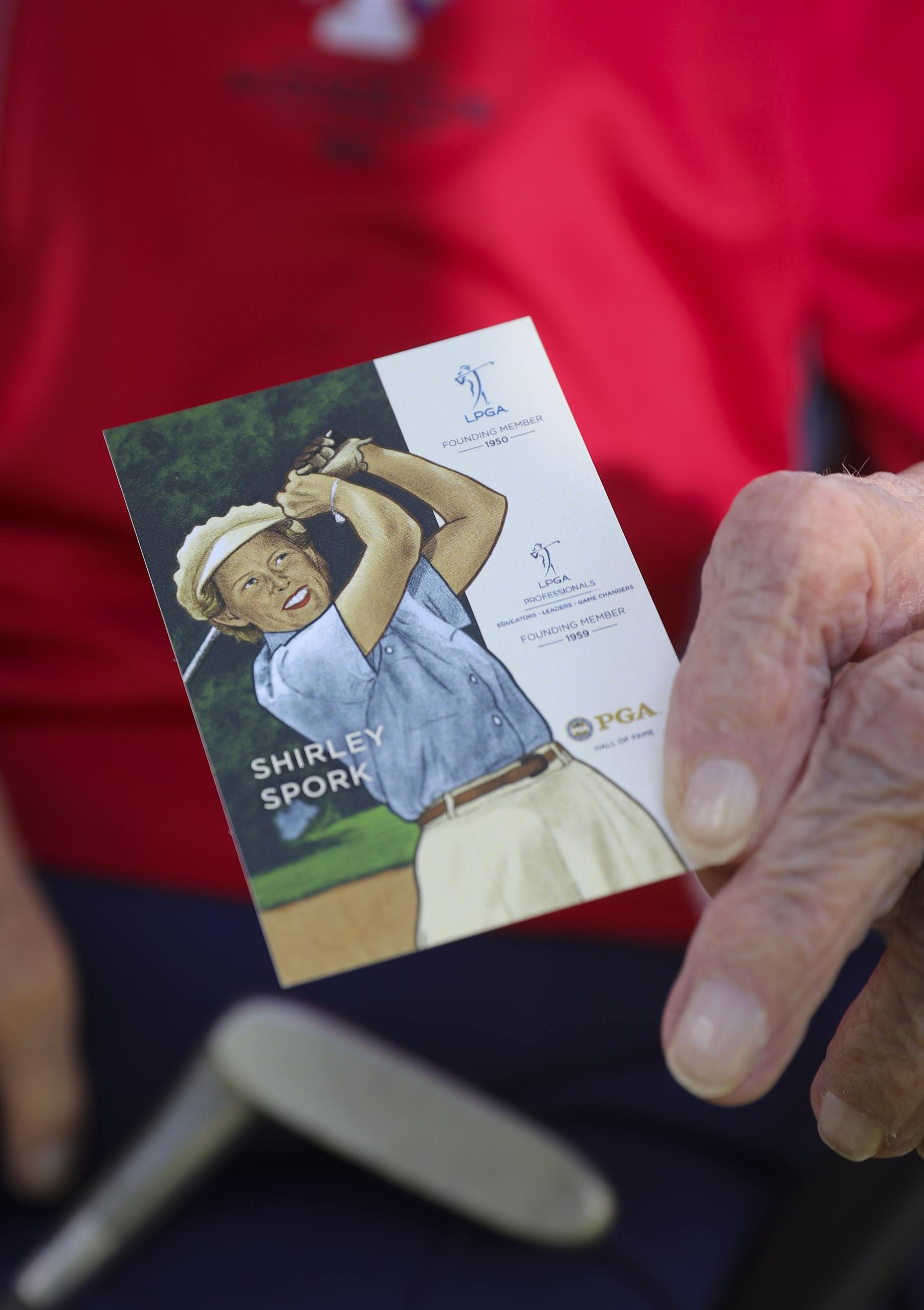 She was one of six inaugural members of the LPGA Teaching and Club Professionals’ (T&CP) Hall of Fame. She won the first-ever National Collegiate Championship in 1947 and was inducted into the Michigan Golf Hall of Fame. Her accolades in the game include being a recipient of the Byron Nelson Award, the Marilynn Smith Achievement Award and the 2000 Commissioner’s Award as an LPGA Founder.

An avid outdoorswoman who loves to fish and travel in an RV, she still teaches golf in Rancho Mirage, California, and plays nine holes of golf once per week even though she has had two knee and two hip replacements.

Spork also was a teacher in the women's physical education department at Bowling Green State University after graduating from Eastern Michigan State University in 1949, and has retained a strong connection to BGSU ever since.

Golfers at Bonnie Brook often would slice golf balls onto her family’s property.

“I would find the golf balls and sell them back to the golfers,” said Spork, who also recounts her introduction to golf and the early days of the LPGA in the book “From Green to Tee” (2017). “The boys in the neighborhood told me I could play with them on Mondays for free if I had a golf club. So, I took my dollar bill and went to downtown Detroit and bought a club.

“I had picked one that was short and straight, and when I went back in the neighborhood the boys all laughed at me because I had bought a putter — the last club you use on each hole.”

Despite her embarrassing introduction to the game, Spork continued to play.

As a teenager, she won the Public Links Ladies event in Michigan. She followed that victory by winning the Michigan state tournament. From there, she played in the Women’s Western Open in Chicago, where Babe Zaharias asked her to turn pro to help found the LPGA.

“I said, ‘Well, how do I do that?’” Spork said. “Babe said, ‘When you go to tee off, tell them you’re a professional. That's how I turned pro.’ So, I walked down to tee off and told the lady to announce me as a pro and she said, ‘Does your mother know this?’ I said, ‘No, she doesn't, but she'll know tonight.’” 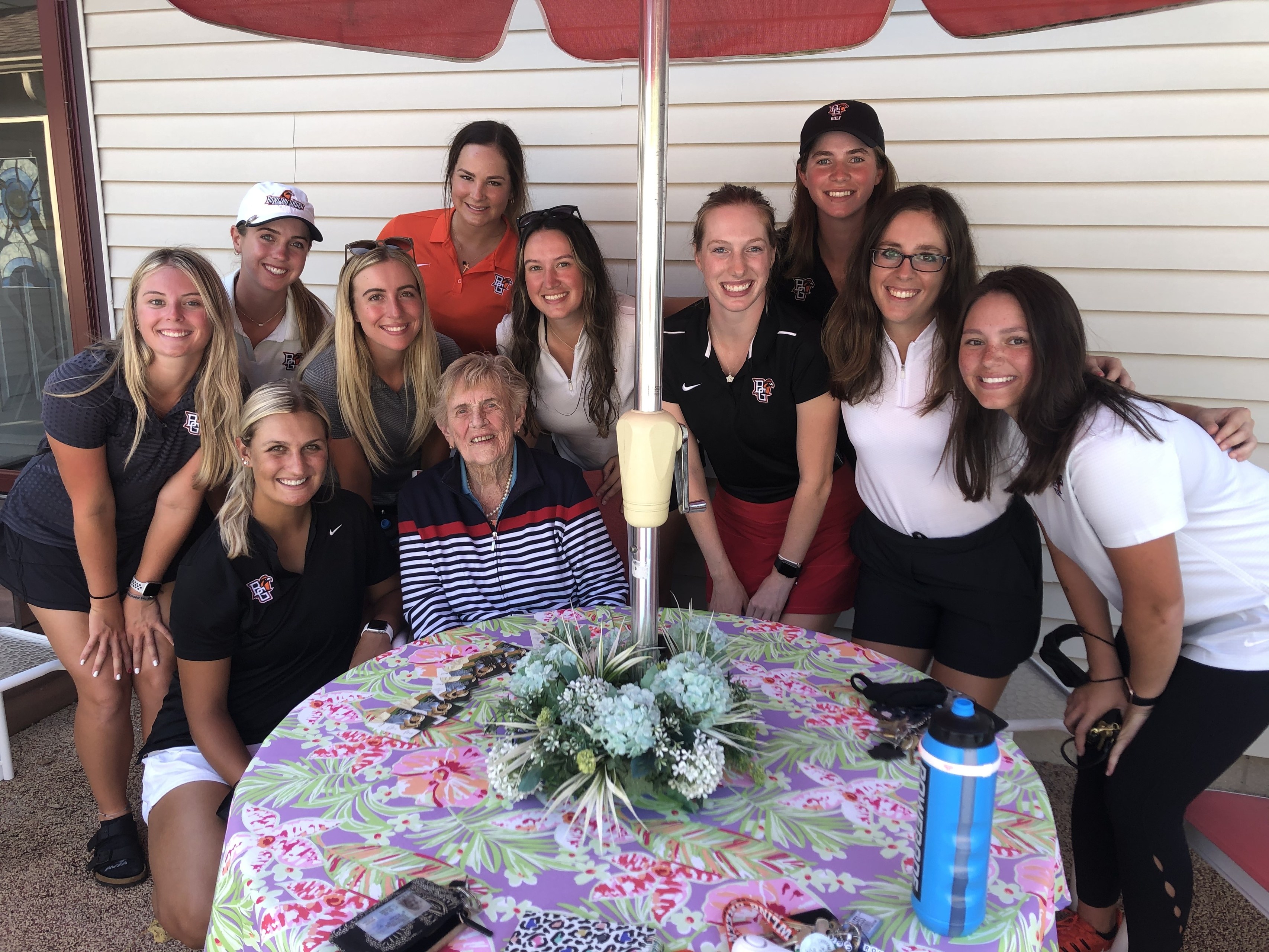 Teaching at Bowling Green, playing in the LPGA

After Spork graduated from the Eastern Michigan, she accepted a position to teach in the women's physical education department at BGSU in Fall 1950.

“I came to BG to teach golf, of course, because they had a golf course right on campus,” she said. “I taught other sports too. In the winter, I taught volleyball and health and fitness classes.”

The LPGA started its tour in 1950, and Spork found a way to play on the tour and teach at the University — at least for a while.

“The Tour always started in January in Florida,” Spork said. “I would teach Monday through Thursday. Then, I would drive to Detroit on Thursday nights and play the tournament, which was Friday, Saturday and Sunday without a practice round. I’d get back on the plane and come back Sunday nights and change at the school. It was a tough way to start playing on a golf tour.”

The grind proved to be too much, so Spork decided to make playing and, eventually, teaching golf her true profession. 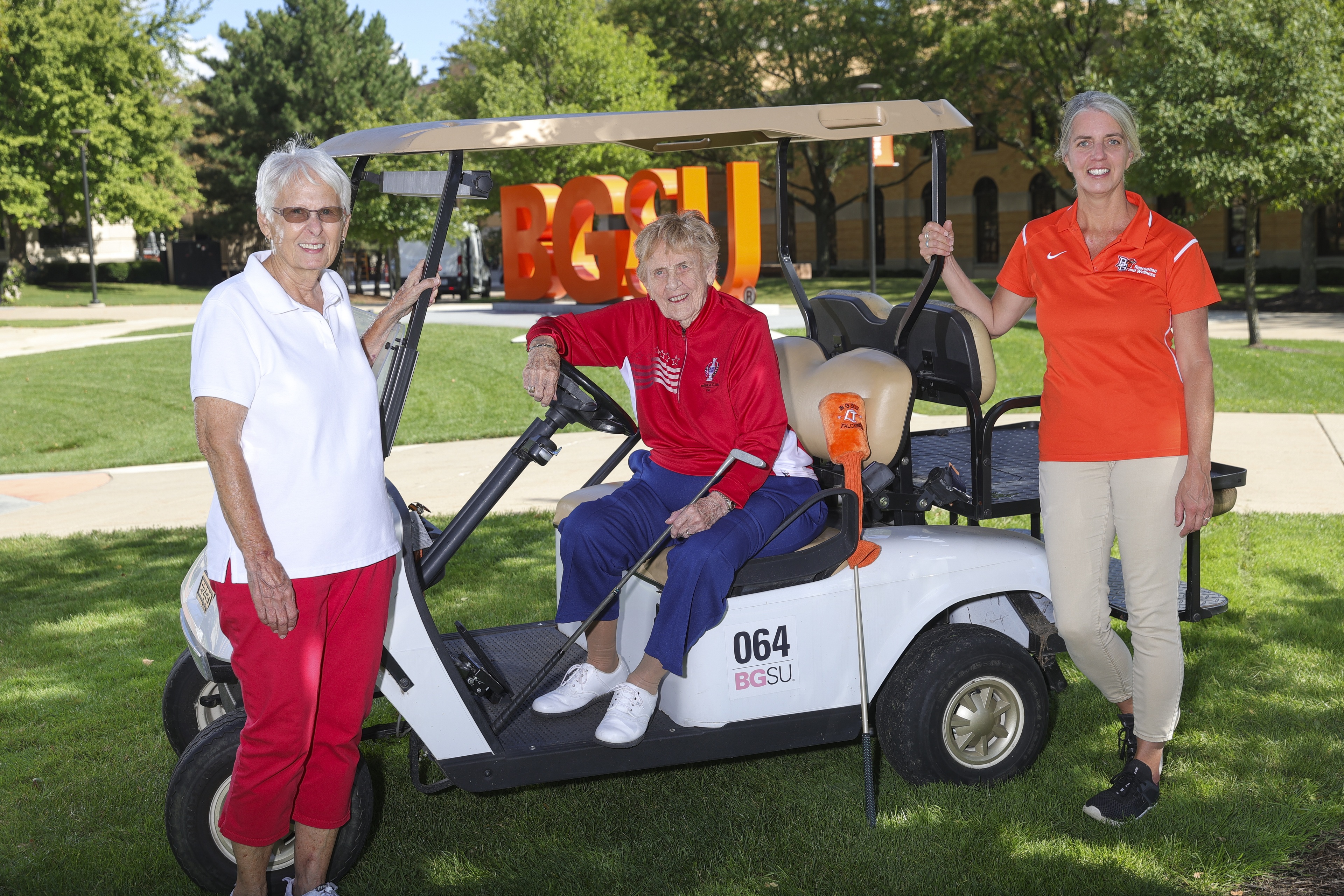 Staying in touch with BGSU

Spork, who also founded the teaching division of the LPGA, went on to play on the Tour into her 50s. She retired at 53 from the Tour after her Hall of Fame career. She continued to be a golf instructor in her post-LPGA career, and still teaches today.

Even though she only taught at BGSU for a year, Spork has kept in touch with the University and the Bowling Green community.

The Falcon women’s golf team, which competed in the Shirley Spork Invitational in October at Eastern Michigan, is well aware of Spork’s legacy and finds inspiration in her personal story.

“We were thrilled to compete again this year at the Shirley Spork Invitational,” said Stephanie Young, head coach of the women's golf team at BGSU. “Shirley is so special to us and is such a tremendous ambassador for the game of golf. She is an absolute legend who has selflessly given so much to all who play this game. I am honored to call her my friend and am forever grateful for her continued support of BGSU Women's Golf.

“She speaks fondly of her time here at BGSU and has come back as often as she can. It has been such an inspiration to the young women who have been a part of the program here for them to have had a chance to hear and learn from Shirley. She's one-of-a-kind and it's been so important to us to not only play in the annual event but compete to win and honor Shirley's legacy and the ties she has with BGSU.”

Kayla Davis, a junior on the BGSU women's golf team from Gahanna, Ohio, was runner-up in this year’s invitational.

“My team and I had the opportunity to meet Shirley earlier this fall,” Davis said. “Just being able to be around her makes you feel like you are witnessing history. Hearing her life story and how she paved the way for women in golf is truly inspirational. To be able to have a strong finish in her invitational meant so much to me since BGSU has such a close connection to Shirley.

“Shirley is such a huge role model to all of us on the team and we will always value the advice she shared with us. Her best advice to us when we visited her is that ‘it all comes down to putting,’ and she is so right. The invitational itself at Eastern Michigan was such an amazing tournament to be a part of and I was thinking of Shirley's advice the whole time.”