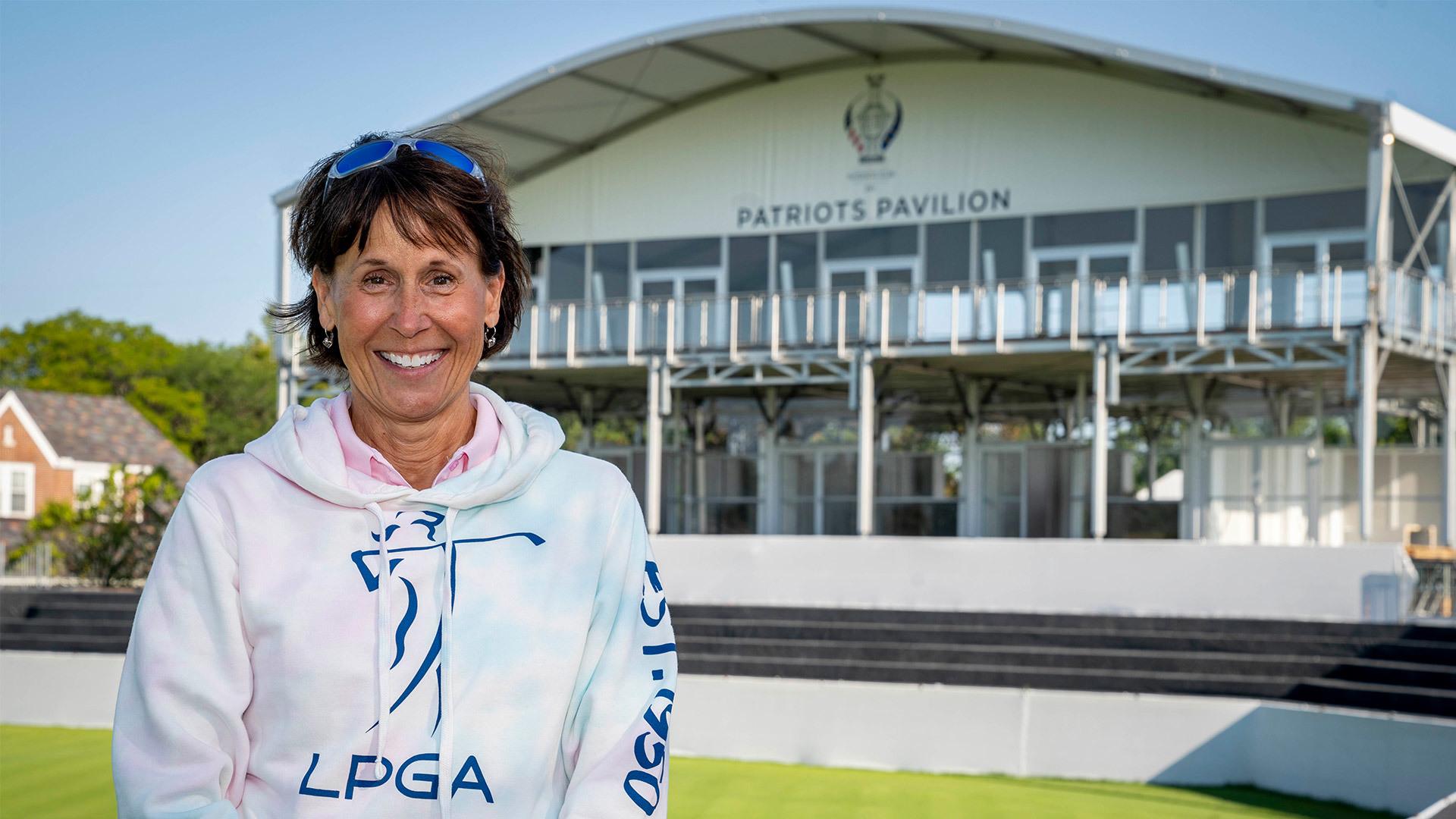 More than 150,000 fans are expected to descend on Toledo this week to attend the Solheim Cup — the biggest international event in women's professional golf.

It’s unlike any LPGA event — the crowds are boisterous and will heavily favor Team USA, which faces Team Europe in a three-day tournament, starting Saturday (Sept. 4), that draws media coverage from all over the world. Chants of “USA! USA!” will greet golfers as they tee off — the atmosphere more akin to a rock concert than the library-like hush of a pro tour.

It's all come together due in large part to Becky Newell ’83, Solheim Cup tournament director. Newell, who grew up in Maumee, Ohio, earned a Bachelor of Science in education from Bowling Green State University and has served on the College of Education and Human Development (EDHD) Leadership Council since 2019.

Setting up the Solheim Cup tournament takes about four years of preparation. She started coming to Toledo in 2017 and then moved to nearby Monclova Township in January 2019.

“This is all about the Red, White and Blue,” Newell said. “We don't hold up any ‘Quiet, please’ paddles here. It gets loud; it’s a party atmosphere and the energy can surge around each hole. There are four matches in the morning and four matches in the afternoon, both Saturday and Sunday, and then on Monday the singles matches.”

The entirety of the tournament will be televised on the Golf Channel and NBC will two days of coverage.

Connecting with the LPGA

Newell has worked for the LPGA for 11 years. She started with the 2013 Solheim Cup in Colorado and then went to work at the LPGA headquarters in Daytona Beach, Florida. Then, when the Solheim Cup director position opened in 2017, she jumped at the chance — not just for the chance to return to Ohio, though that has its benefits.

“That’s just how it happened,” Newell said. “I would have gone anywhere for it, but it has been a little extra special being back here.”

This isn’t her first connection to the historic Inverness Club or to other pro golf events in the area. She was a volunteer for the 1979 U.S. Open at Inverness, and she volunteered for many years at the Jamie Farr Classic in Sylvania.

When Newell attended BGSU, there wasn’t yet a sport management program, so she majored in education, specializing in K-8. She taught at Ottawa Hills and Maumee Valley Country Day until 1992, when her husband got transferred to Georgia.

Because she had networked with people in the golf industry while volunteering at the Farr, she had an in to professional golf.

“The LPGA had an office in Marietta, Georgia, when I connected with them — and that kind of started my association with the LPGA,” Newell said. “I worked for a nonprofit, Metro Soft Golf Charities, and we had a tournament, Chick-fil-A Charity Championship, that we ran for almost twelve years out of Atlanta.”

Then she was a race director for a year for a 10K Classic that had Olympic components to it for those who qualified. Next came a stint in China as she ran a men’s Asian tour event in Beijing as a prelude to the Beijing Games in 2008. After she got back to the United States, she took a job as tournament director for IMG in Atlanta.

She helped with The Master’s Tournament in Augusta, Georgia, and then was the tournament director for a PGA event in Florida and another golf event in Texas.

“Ultimately, I ended up with the LPGA in 2011 have been with them ever since and with Solheim Cup roles twice,” said Newell, who was on the business side of the LPGA as well.

A love of events and the game of golf

Newell has always had an interest in sports but didn’t pick up golf until later in life.

“I ran track in high school and at Bowling Green — I’ve always loved sports,” she said. “My dad always tried to get me to play tennis or golf, but I didn’t pick up golf until I met my husband. Let's just make clear: I’m not a professional, but I love to put on events, and I love the game. I think it's just something that everybody should learn to play. I wish I would have known that when I was in my 20s.

“Golf is such a great business tool for you to use. There are a lot more things that can get done on a golf course, where you can really get to know people and their personalities.”

BGSU prepared her for a career full of changes

Newell has been working with Dr. Ray Schneider, the interim director of the BGSU sports management program.

“I talk to kids students about their career path and make introductions for them to look for jobs,” she said. “As a matter of fact, we have two Bowling Green interns here right now who are working at Solheim Cup."

Newell said she is still friends with all her BGSU roommates.

“I got to know a lot of people back then,” she said. “The track team used to practice in the ice arena before they did all the remodeling.”

A couple of those players were hockey greats George McPhee and Brian MacLellan — “We were all the same age and a lot of us have stayed in contact in the sports world.”

Newell still remembers the phone number to Myles' Pizza in Bowling Green, but she also still recalls all the connections she made as a student.

“I think the biggest thing that I have as a graduate of Bowling Green — and, of course, I didn't know this right out of college — is to embrace your ties to the University. The people who I met would have never guessed when I left here in ’92 that I would be back here. Staying in contact with people here helped me over the past three years make connections in the area. I’ve always been a big networker. I love to communicate and don't communicate through email.

“I really do like doing a Zoom call or meeting people in person. That's what I try to instill in a lot of our younger folks coming out of college — the importance of making that personal connection, and a connection through email just isn’t going to cut it.

“People are pretty important to me and always have been, whether it's for golf or it's just my personal life, friends and family. You never know when you might need that friend you met on an airplane or on a golf course.”

To learn more about the Solheim Cup or to see a schedule of events for this week, visit the tournament website.