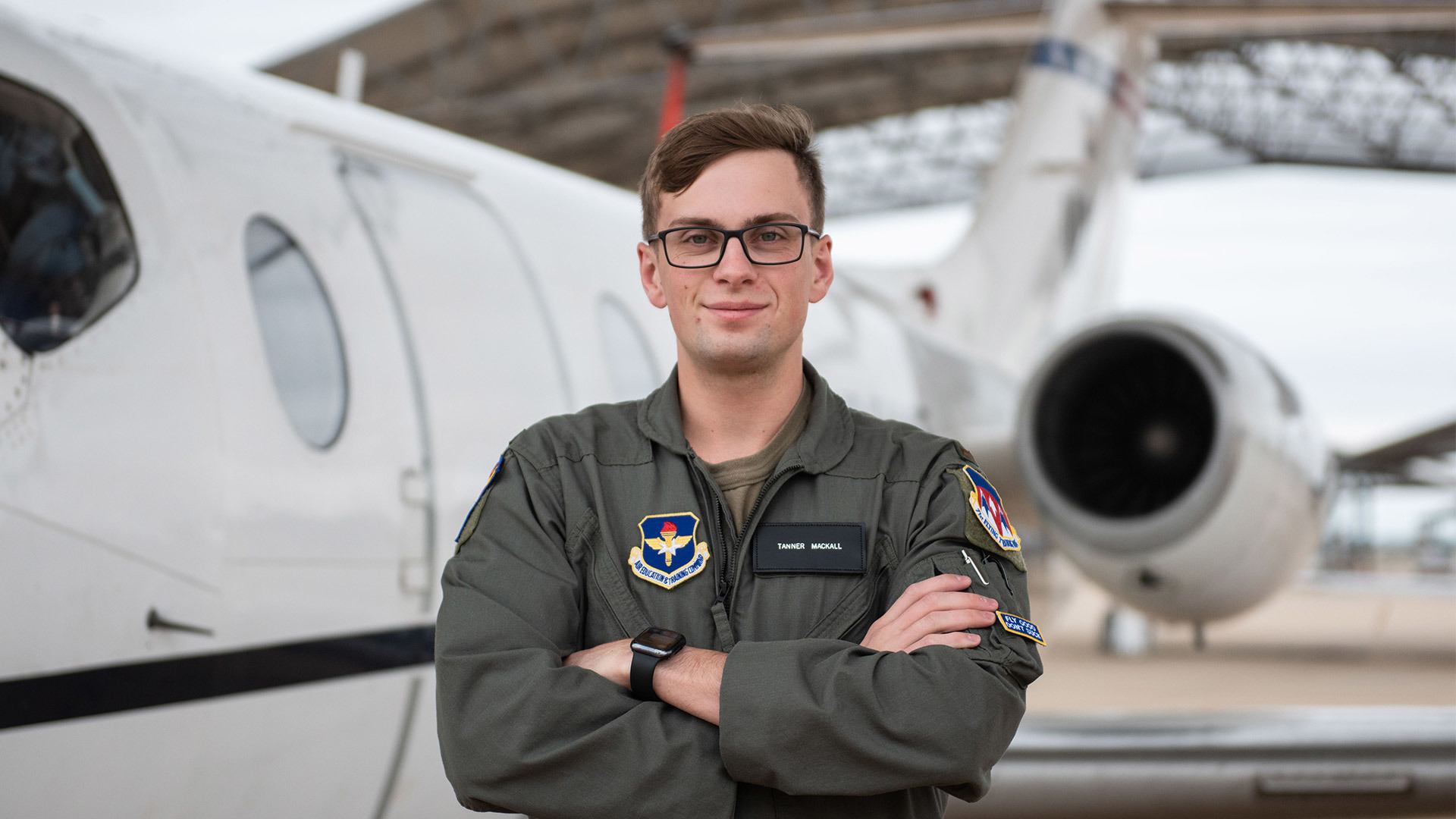 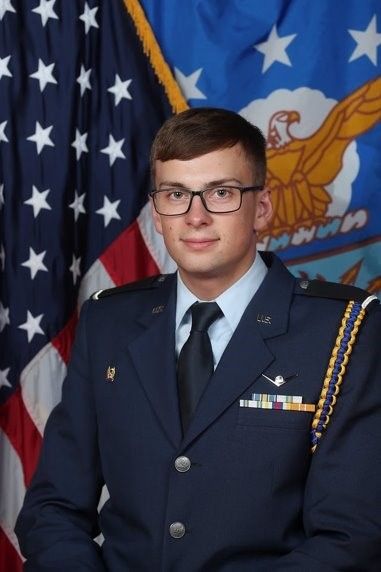 When other kids his age were probably watching SpongeBob, playing with Legos or sorting through their Pokémon cards, 12-year-old Tanner Mackall was sitting in the co-pilot's seat of a small airplane, his hands on the controls.

A flying career that launched on his 12th birthday at the local airport near his eastern Ohio hometown reached phenomenal heights just 10 years later.

Now, the sky is truly the only limit as this second lieutenant in the U.S. Air Force and 2021 graduate of Bowling Green State University moves forward, as part of an elite group of aspiring military pilots selected to advance their training without delay due to the significant flight experience they gained as civilians.

Mackall, who earned a Bachelor of Science in aviation studies with a specialization in flight technology and operations, is the first Reserve Officer Training Corps (ROTC) cadet/student from BSGU to be selected for the Air Force’s new Civil Path to Wings initiative, which is intended to help address a current backlog in the pilot training program.

The Path to Wings program picks the top pilot candidates from graduates of university ROTC programs, Air National Guard and Reserve units and the civilian ranks who are interested in earning their Air Force wings, then moves them up in the training ranks. The intent is to accelerate the training of this elite group of candidates in the aviation pipeline by placing significant value on their prior flight background.

The program intensively screens applicants through a series of written and oral exams and an evaluation of their piloting skills. Evaluators considered Mackall exceptionally qualified to be considered for this Air Force pilots' training initiative since he had already earned commercial and instructor pilot ratings, as well as logging more than 700 hours in the cockpit.

“Without that significant number of hours, he would not have been able to move up like he has,” said Lt. Col. Amy Grant, commander of the Air Force Reserve Officer Training Corps Detachment 620 headquartered at BGSU. The unit's role is to train and develops cadets to commission as Air Force officers who are ready to meet the nation's security challenges.

“With his experience and background, he will graduate USAF flying school earlier than his peers," she said. "With his certifications he can skip much of the coursework and go straight into the flight simulators. This gets him into the cockpit and flying faster.”

Mackall said that after he took that first flight, every dollar he made once he started working would go to pay for flying lessons. By the time he graduated from high school, he already had his pilot's license.

“I was in Civil Air Patrol in high school and that experience helped reaffirm that I wanted to be a pilot in the Air Force,” said the 22-year-old, who is currently stationed at Vance Air Force Base in Oklahoma. “I was originally told to expect to wait at least a full year after I graduated from college to get to first base in pilot training with the Air Force, but I was able to get here much sooner, in September, largely due to the experience I had. I wanted to be as well-equipped to get this assignment as I could be.”

Mackall credited his professors and instructors in the BGSU aviation program with furthering his skills, expanding his training and helping to provide him with the foundation to advance in the Air Force pilot candidate ranks.

“Bowling Green has a phenomenal program and it definitely prepared me well,” he said.

For more than 40 years, the BGSU aviation program in the College of Technology, Architecture and Applied Engineering has been training students to work as military pilots, airline pilots, corporate pilots, airport managers, airfield specialist and aviation consultants. As one of the few universities in the country with an on-campus airport, the University has more than 60 aviation faculty and staff members at BGSU to support the program, a fleet of 18 aircraft and a pair of flight simulators.

“The facilities are amazing and we're also fortunate that some of the instructors and professors are former military,” Mackall said.

Grant said that being part of the BGSU aviation program or Air Force ROTC at the University does not guarantee advancement into the highly selective field of pilot training in the military.

“These are competitive programs that look at your GPA, how you score on officer qualification tests and how you perform in field training,” she said. “2nd Lt. Mackall was competing against all of the other ROTC candidates across the country and he did very well. There are very few selected for this kind of advancement in the pilot training program in the Air Force, and he was one of the few.”

While his education, experience and background has placed him at the front of the line as the Air Force works to address its backlog in pilot training, Mackall is completing an extensive round of testing and evaluations and anxious to get back in the air.

He hopes one day to pilot the Boeing C-17, the Air Force workhorse when it comes to rapidly moving troops, cargo and equipment from main operating bases to a deployment area.