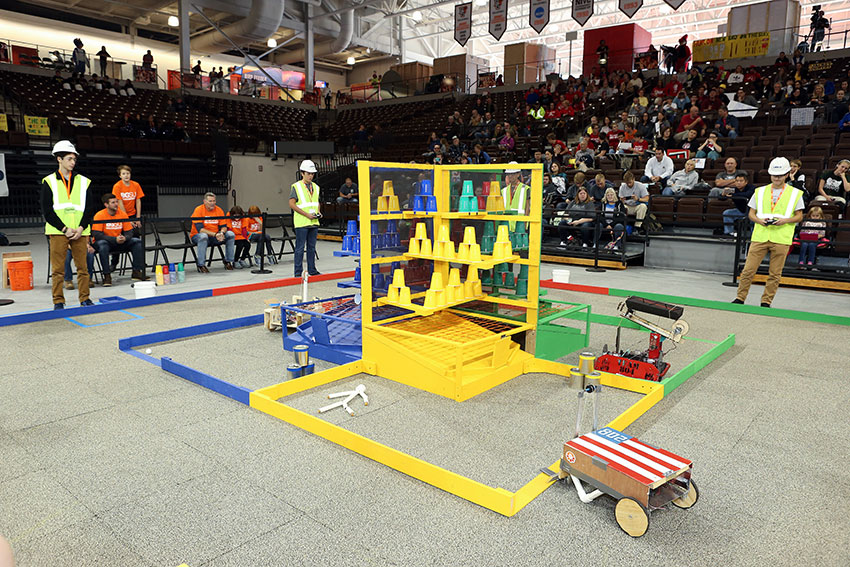 The MVHawksRobotics won the BEST award, which recognize the overall top team after counting total points from the engineering notebook, robotics competition, marketing, exhibit and spirit events. That wasn’t the only accolade collected by Maumee Valley as it also took home awards for second place in the robotics competition, the Most Robust Machine, BEST Engineering Notebook and BEST Exhibit and Interview.

This was the fifth consecutive year that Bowling Green State University has hosted the event. BEST stands for Boosting Engineering, Science and Technology. The theme for this year’s event was fire safety. Teams interviewed and engaged with local fire departments to help develop their robot’s strategy.

“This year presented some large challenges even before the Falcon BEST contest was unveiled,” said Phil Paskvan, MVHawksRobotics head coach. “Maumee Valley tries very hard to make sure that kids are exposed to many experiences while they are here. Athletics, clubs, drama productions and challenging academics all compete with time for the robotics team. As coach, I resolved this by making myself as available as possible by being at the school after sports and club activities. This usually meant some long nights or Saturdays, but it ensured access to tools and facilities.”

It also ensured the team would be traveling to North Dakota.

“The size of the team is also a challenge,” Paskvan said. “We had approximately 40 students from seventh to 12th grade participate in all areas of BEST. Having student leaders organize these groups was a huge factor in making sure we finished all our tasks.

“The two biggest influences on success for the team this year were having three great senior student leaders, Oliver Heard, Bailey Hannan and Finn Bamber, who provided organization and guidance while using the tools and a physical space provided by the school to work. It can be messy.”

The teams were required to design and build a prototype robot to rescue a fire test mannequin, contain simulated dangerous chemicals and extinguish “flames” with plastic golf balls during a three-minute match. A robot can score points by performing each objective — the faster the accomplishment, the higher the score.

“The team also branched into new areas for this year,” Paskvan said. “We added a programming group to create a Simulink program that is scored as part of our engineering documentation and we purchased a CnC router for accurately cutting robot components.”

The goal of BEST Inc. is to help students decide on career choices early, especially ones related to STEM (science, technology, engineering and math).

"Falcon BEST Robotics was essential for translating my ideas and motivation into actual engineering products," said Jonathan Buchanan, a member of the Maumee Valley team. "Every year I participate, I learn more and more about the engineering process. Moreover, BEST Robotics has given me the opportunity to participate in engineering in a collaborative setting, which is very important to developing a complete STEM education that would lead to a career in this field."

To see the results of the competition, visit the Falcon BEST Robotics website.