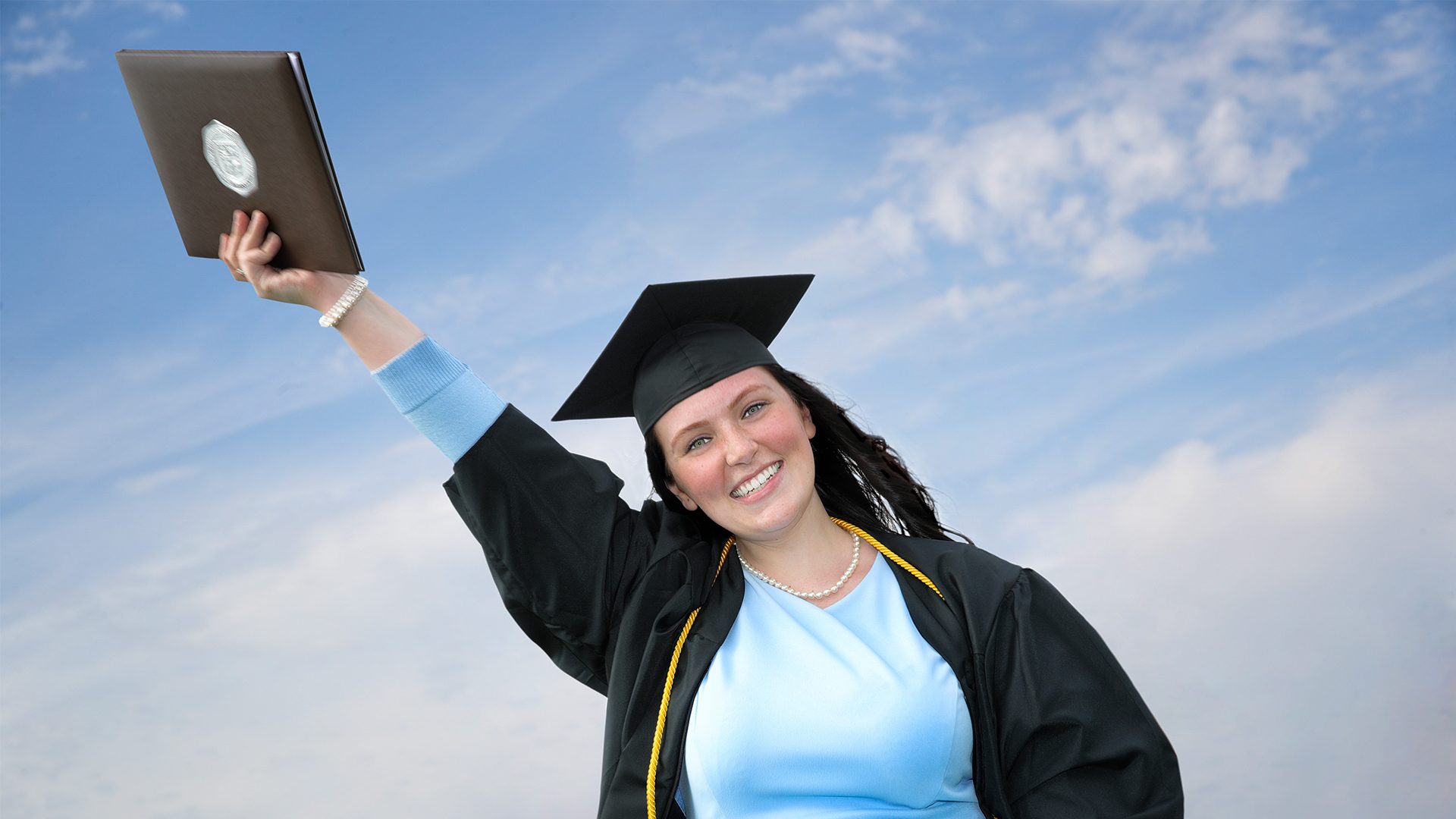 Alexia (Allie) Larson grew up with amazing grandparents whose advice has guided her through some of her toughest days. They also unknowingly laid the groundwork for her to discover her career path.

Her grandparents, Gustava and Donald Oberhouse of Pemberville, Ohio, loved her unconditionally and ingrained in her many lessons; the two most enduring: “If you don’t have anything nice to say, don’t say anything at all,” and “It’s OK to make a mistake; don’t do it again, and be better from it.”

“I always thought I was pretty lucky in the grandparent department, but when I started working at a local senior living facility, I realized many of the residents were just like my grandparents, and I liked hanging out with older adults,” Larson said. That is when she switched her major for the third time and decided to pursue a degree in gerontology in the College of Health and Human Services at Bowling Green State University.

The fit was so perfect that she worked hard to finish her degree on time – May 2021 – and even landed her ideal job six months ahead of graduating.

After graduating from Bowling Green High School in 2017, Larson chose to attend BGSU to study forensic biology. She enjoyed science and thought forensic science might be a career she would enjoy.

“It just didn’t feel quite right, but I didn’t really know what I wanted to do, so I went into education,” Larson said, thinking it would be a good path.

At about the same time, she needed to find a job and was hired as a server at Brookdale, a senior care facility in Bowling Green. Initially, she joined there to work with a friend, who was also a server. Larson quickly realized she wasn’t a very good server because she preferred having more in-depth conversations with the residents. She changed from being a server to working in the activities department, where the job is designed to develop relationships with the residents.

“The stereotype of senior citizens being old and grouchy just wasn’t true. They were all so spunky and cool, just like my grandparents. They love to tell you stories and joke around with you,” Larson said. “At that point, I knew gerontology was where I needed to be.”

Classroom and real-world experience paid off

Larson’s time at BGSU allowed her to use the information she learned in the classes to improve her skills on the job. She also discovered that the experience she gained on the job often provided real-world examples during the classroom discussions.

In addition to the Brookdale job, Larson also worked for Harbor Behavioral Health at a group home for men with schizophrenia and for Wood Lane helping to care for younger individuals with developmental disabilities.

Each opportunity has given her new opportunities and experiences that have been invaluable to her education and her work.

“I remember when I moved from Brookdale’s assisted care unit to the memory care unit, I was terrified because it was such a different world,” Larson said. “I was able to take some of the knowledge that I learned from my classes to help me better understand how to care for people with dementia and be sensitive to their needs.”

Among her favorite classes were Health and Aging, and Psychosocial Aspect of Aging. The classes confirmed a lot of what she was seeing through her work.

She also appreciated the gerontology faculty, who generously shared their expertise, enthusiasm and commitment for the topic and their teaching.

“The gerontology professors are amazing – all of them. Not only are they great people but they are also great educators,” she said. “I felt like they really gave me the opportunity shine, and they 100% shaped where I am today.”

She credits Dr. Cynthia Spitler, a gerontology instructor, for talking about long-term care ombudsmen during a Spring 2020 class.

“She was talking about it in one of her classes and I thought that it sounded like one of the coolest jobs anyone could have. Honestly, it uprooted my whole life plan from working as a program director to wanting to be an ombudsman.”

Within a week after hearing about the position, she contacted the Toledo office of Advocates for Basic Legal Equality (ABLE), which handles long-term care issues in a 17-county district. She secured one of the ombudsman intern positions a year ahead of the usual timing for an internship, “because I was that excited about it,” Larson said.

During the internship, she became a certified volunteer ombudsman and in December 2020, five months before she her graduation from BGSU, she was hired full time to be a long-term care ombudsman and coordinator of volunteers.

Since COVID-19 hit, most of her work has been handled remotely. The issues are received from the governor’s office and caregivers, family members and residents calling or emailing with concerns. She works with a team of volunteers who are the eyes and ears in the facilities to assess the situation and advocate for the residents.

Focus on quality of care

Larson believes the work is important because it focuses on quality of care, which “completely shapes how well a person does in the facility,” she said. “You know if they aren’t stimulated, if they aren’t feeling at home, then their mental health and physical health decline.”

The best part of the job for her is listening to residents’ problems and trying to find solutions. “I’ve always been a little bit of a problem solver, and now I can put that to good use and make a difference in their lives,” she said.

She also hopes to make a difference in the long-term care of lesbian, gay, bisexual and transgender older adults. She looked at the issue as an ombudsman, but also as the topic for a research project she presented at the Center for Undergraduate Research and Scholarship’s Symposium on Diversity.

Mentored by Dr. Laura Landry-Meyer, an associate professor of human development and family studies and her aunt, Larson found that individuals who identify as LGBT experience discrimination. With an estimated five million people who identify as LGBT to be in long-term care by 2030, Larson’s research will be able to inform future training for the long-term care ombudsman program’s staff and volunteers in northwest Ohio. She also presented the research at the Ohio Association for Gerontology Educators conference.

In addition to the outstanding faculty, she is thankful for her family and friends’ support, throughout the past four years, especially her parents, Jan and Frank McLaughlin. She continues to follow her grandmother’s advice, which she and her mother and sister refer to as “What would Grandma Gussie do” in rough situations.

“I’ve learned that you don’t always know what is going on with someone else, so the best thing to do is to just act nice toward them and stay positive regardless of the situation.”

For future BGSU students, Larson offers her grandfather’s advice: “I’d let them know that it’s OK to not know what you’re going to do. It’s OK to make a mistake every now and again. Just learn from it and do better next time.”