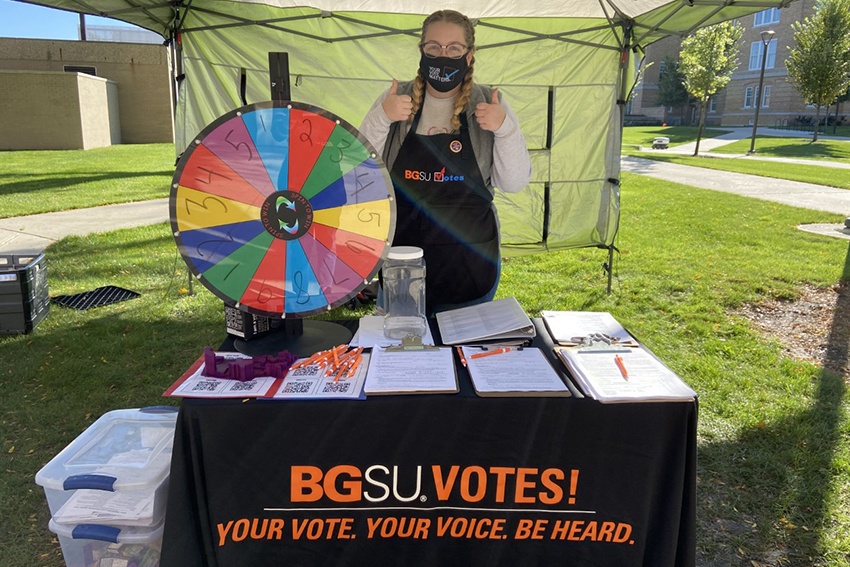 For the first time in her life, Bowling Green State University senior Sierra Nathans is casting a ballot in a presidential election.

For many, civic duty starts and ends there.

But Nathans is answering another call this election by signing up to be a poll worker, also a first for the Thompson Family Scholar who is double majoring in sociology and philosophy, politics, economics and law (PPEL).

“I kept getting emails over the summer saying poll workers were needed,” said Nathans. “I had never really thought of it before, but I knew I could do it and I wanted to volunteer because of the pandemic.” 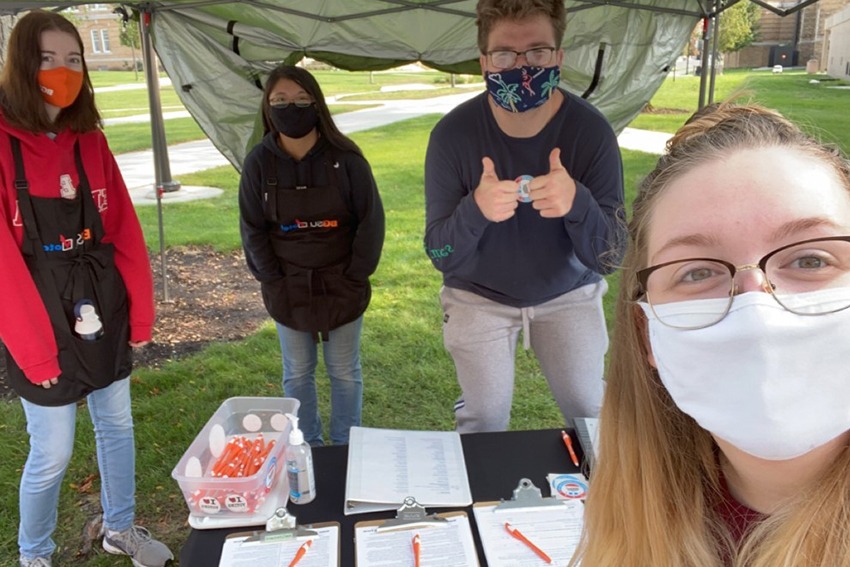 Nathans, a Campus Election Engagement Project fellow with BGSU Votes, recruited approximately 40 other students to join her in working the polls on Election Day.

“I’ve always been interested in voting,” said Nathans. “With BGSU Votes, we don’t focus on any one candidate or political party, we just focus on voting in general. That spoke to me because I just want everyone’s voice to be heard.”

“Students see the challenge,” said Paul Valdez, associate director of the BGSU Center for Public Impact. “Traditionally, when you go to the polls, you don’t see a lot of young people working there. This year, students recognize they want to serve so people who may be uncomfortable working the polls because of their risk category due to COVID-19 don’t have to.”

Valdez, who spearheads BGSU’s voter engagement initiatives through BGSU Votes, said he has seen more students who are planning to be poll workers this election than ever before.

“Nationally, there has been a push to recruit poll workers, which we’ve also seen at the state level,” Valdez said. “This year, we’ve done a lot more to communicate with students to be a poll worker and they have responded.”

BGSU Votes worked in collaboration with a number of organizations throughout the election season, including Work Elections, Ask Every Student Initiative, Andrew Goodman Foundation, Campus Vote Project, and Campus Election Engagement Project to provide resources to encourage students to engage in the election process, from registering to vote to becoming a poll worker.

It was much needed support, because college-aged voters often face challenges in becoming a poll worker, Valdez said, including scheduling conflicts with in-person trainings and a day-long commitment at the polls on Election Day.

“Students typically haven’t had the time in their schedules,” said Valdez. “But students also may not have known about the opportunity to participate in their communities. This year, a lot of trainings are online and it has made it more available for students to participate.”

In Ohio, poll workers can only work the polls in the county where they are registered to vote, another challenge for many students who may live hours away from their voting place.

Nathans, who is from the Columbus area, is registered to vote in Wood County and is awaiting her polling place assignment.

“I want to make sure people have the chance to vote in-person and I want it to be smooth for everyone,” she said.