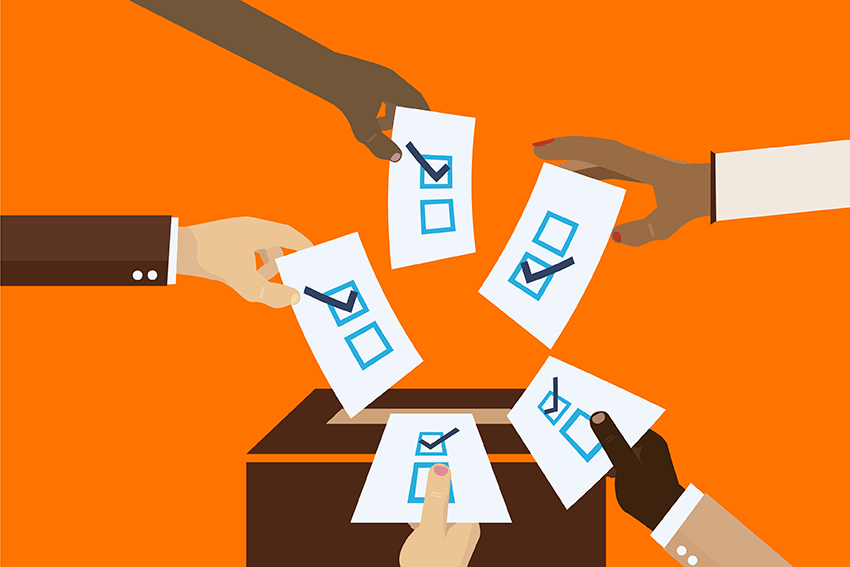 Growing program helps get students involved in the democratic process

In any election, it’s important that young voters participate in the democratic process. But in a presidential election year — and a highly charged one at that — it becomes even more vital that college-aged voters head to the polls.

Bowling Green State University’s BGSU Votes, a nonpartisan initiative of the BGSU Center for Public Impact, aims to facilitate that.

“When college students or young people vote, especially for the first time, it helps to set up a habit of voting in the long term,” said Paul Valdez, associate director of the BGSU Center for Public Impact. “The sooner they vote, the more likely they are to continue participating in democracy over the course of their lifetime. It’s also important for young people to vote because with voting rights history, that 18- to 21-year-old age group didn’t always have the right to vote.”

Valdez, who was recently chosen as the Andrew Goodman Foundation’s (AGF) Campus Champion of the Year, oversees the BGSU Votes program that was started in 2012. BGSU Votes has since become recognized as a Leader Campus for the national organization.

“The participation in a democratic process, in many ways, is a learned behavior and access is really important. It’s a solid commitment of a public university, for the public good, to set up an environment that helps students,” Dr. V. Jane Rosser, director of the Center for Public Impact, said of BGSU Votes, which carries a primary goal of getting students informed and registered to vote. “Students still choose what they want to do, but they’ve got full access to information because it’s part of being a citizen — locally, in the state and nationally.”

In all its programs, the BGSU Center for Public Impact focuses on student leadership. For BGSU Votes, this means setting up volunteer positions for students — who then receive additional training, resources and sometimes a stipend from nonpartisan national partners such as AGF, as well as the Campus Election Engagement Project and the Campus Vote Project.

Students in these fellowship positions serve as the main student leader of advancing BGSU Votes’ work on campus. All those other positions and volunteer roles form around that, according to Valdez. “There’s one main coordinator and then the other student volunteers do a lot of the regular voter registration and education and event planning,” he said.

Since the program has been able to harness more partnerships with national organizations, core student leadership has increased — currently there are six fellows and an expanded network of 20 volunteers.

“We’re paying attention to the national landscape and where we can find resources to help support them, whether it’s the opportunity to have a paid position, professional development training or the opportunity to go to conferences nationally,” Rosser said. “Paul’s role particularly has been building those relationships with the national organizations. Students really follow through because they’re getting a very strong mentoring relationship and also developing skills, learning how to design and build campaigns on our campus, and feeling like they’re part of a national movement.”

In addition to training at conferences, volunteers also receive regular digital training from national partners, as well as weekly meetings among the core BGSU Votes leadership team. Valdez also coordinates off-campus engagement with key groups, like meetings with the board of elections and webinars with the League of Women Voters.

Because BGSU Votes was in place before any partnerships with national organizations, Valdez was able to bring in partners to enhance the existing program — rather than build from scratch — while serving as the campus champion and making sure students have access to the resources.

A large part of that access was building pathways of collaboration between BGSU Votes, student organizations and the community. Examples include creating connections with Residence Life and working with BGSU’s general counsel and the Office of Registration and Records to create a voter identification letter for on-campus students, which serves as proof of address and can be accessed via the MyBGSU portal.

“Those sustainable types of projects are removing barriers for students to participate in the process,” Valdez said. “We’ve really worked hard the past few years to develop that coalition. It’s not just the BGSU Votes initiative, we’re trying to involve student leaders from different organizations, different campus units and different representatives across campus to be aware of this and build a culture of political engagement.”

In the 2016 election, voter participation on campus reached 53 percent. In this year’s annual Action Plan, BGSU Votes set a goal of 65 percent participation for the fall election; however, in light of changes and restrictions for events and in-person gatherings due to COVID-19, the organization is now aiming for between 60-65 percent.

Planning in a Pandemic

The pandemic and ever-present possibility of a shift to 100 percent online learning has changed some strategies for this fall.

“Traditionally, we find that one-on-one interaction between students is the most effective way to communicate information and empower students to register and vote,” Valdez said. “We always had a core group of students at Welcome Week activities to register voters and answer their questions. Then we shifted to regular tabling within the student union or on the education steps or even the library.”

There also were presidential debate watch parties, which included pre- and post-tests developed by the political science department; and candidate forums, which featured local and state candidates answering questions put together by the League of Women Voters.

BGSU Votes also has access to the BGSU Navigate app, through which it reaches subscribers with survey questions, such as asking if they are registered to vote, and then emails them information accordingly. These emails are then followed up with a phone call to ensure students receive the needed information.

Classroom and student organization presentations are continuing as usual this fall, in addition to the newly formed BGSU Votes Election Champions outreach, which Valdez described as a partnership between a liaison with BGSU Votes and campus organizations, student teams and scholarship programs.

“We’ll actually train them in the voter registration process,” he said. “We’ll provide them with resources, like a PowerPoint that they could deliver to their own audience, their own team or their own group. We’re trying to expand how many people are doing this with us, partly because it is a presidential election year and there's a lot more interest, but also because it allows us to not have to go into as many physical spaces, because these groups are going to be meeting online anyhow.”

Not only has the pandemic required BGSU Votes to shift certain operations, but it could cause more confusion for students who desire to cast their ballot in November.

“Students have to make different choices now in terms of where they choose to register, especially with the absentee voting process,” Valdez said. “For example, if they register to vote at their on-campus address in Bowling Green and there is a displacement event that happens a month from now, it's possible that they could actually update their voter registration and shift it to their home address. If it’s after the voter registration deadline, they’re still going to be registered to vote in Bowling Green, but they may be living with their parents halfway across the state. Or their absentee ballot may be getting sent to their residence hall room.

“It’s a complicated process for students. Now with the pandemic, it’s even more complicated because they may not be thinking as far ahead of all the different possible scenarios that may occur and how they need to set themselves up for success to cast their vote.”

“I think the hope is that if it takes seven touches, seven times for somebody to take action on something, we’re just trying to have as many touches as possible to increase those numbers,” Valdez said.