Conference focuses on how automation, artificial intelligence will impact workforce 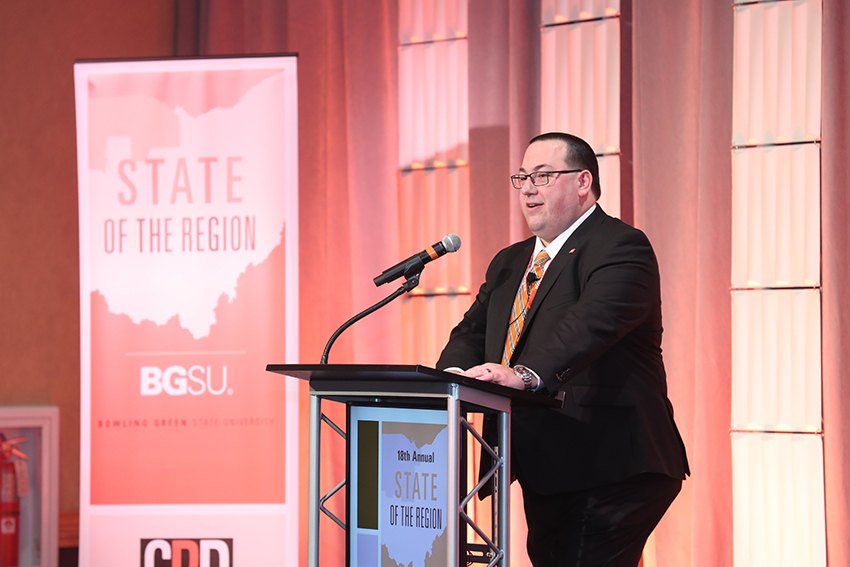 With the arrival of delivery bots on campus at the beginning of March, science-fiction dreams from the 21st century have started becoming science fact. Coincidentally, the robots made their debut the same day the university’s Center for Regional Development (CRD) held its 18th annual State of the Region conference, “Developing Tomorrow’s Workforce by Embracing and Investing in Robotics and Artificial Intelligence.”

“The State of the Region Conference is another example of BGSU serving as a public university for the public good,” said Russell W. Mills, senior director of the CRD at BGSU. “The Center for Regional Development’s State of the Region Conference is an event that brings together over 275 officials from the public, private and nonprofit sectors to provide an update on the economic and social performance of our region and discuss important topics that will affect northwest Ohio in the next 5 to 10 years.”

At the conference, Mills examined the potential impact of automation on occupation needs in the future. At the time of the conference, there were approximately 25,000 unemployed workers in the labor force across the 17 counties of northwest Ohio. Those numbers make for a tight labor market, and the population continues decreasing with 9,500 (~0.8%) people leaving the region between 2015 and 2019. However, Guhan Venkatu, vice president of Research at the Federal Reserve Bank of Cleveland, noted at the time that the spread of COVID-19 across the region may affect both unemployment and output in the near and mid-terms.

Mills also highlighted that, according to the Brookings Institution, the Toledo metropolitan statistical area (MSA) has the highest concentration of industrial robots per 1,000 workers (9.0) and the highest automation potential of existing jobs (49%) of large metro areas in the United States. Over the next 10 years, many factory jobs face high automation potential. The region is projected to have shortages in jobs that require higher education such as engineers and computer occupations.

Molly G. Martin, director of New America Indianapolis, gave a keynote address titled, “Mythbusting the Future of Work: Risks and Opportunities for the Region.” This presentation focused on the social implications of automation in the region and strategies such as attracting immigrant populations, which could help to take advantage of its concentration of automation.

Finally, Dr. Jennie Gallimore, dean of BGSU’s College of Technology, Architecture, and Applied Engineering, moderated a panel discussion titled, “Positioning Ohio to be a Leader in Robotics and Automation”, which featured panelists Ari Lewis, co-founder of OhioX; Nathan Spoden, founder and chief operating officer of MedPilot; and Scott Lang, president of Motion Controls Robotics. The discussion focused on the future of work and efforts underway in Ohio — such as the TechCred program — to invest in preparing workers for the technologies of tomorrow.

With robotics and automation improving by the day, Mills said it is important to discuss and prepare for their integration into the workplace. The CRD’s conference helped to educate and prepare attendees for the changing times.

“The State of the Region participants all had different backgrounds and addressed the topic in ways that prompted the audience to view it from multiple perspectives,” said Deminique Heiks, CRD economic development program coordinator. “We were proud to offer a lineup of speakers that reflected our attendees’ diverse connections with automation.”