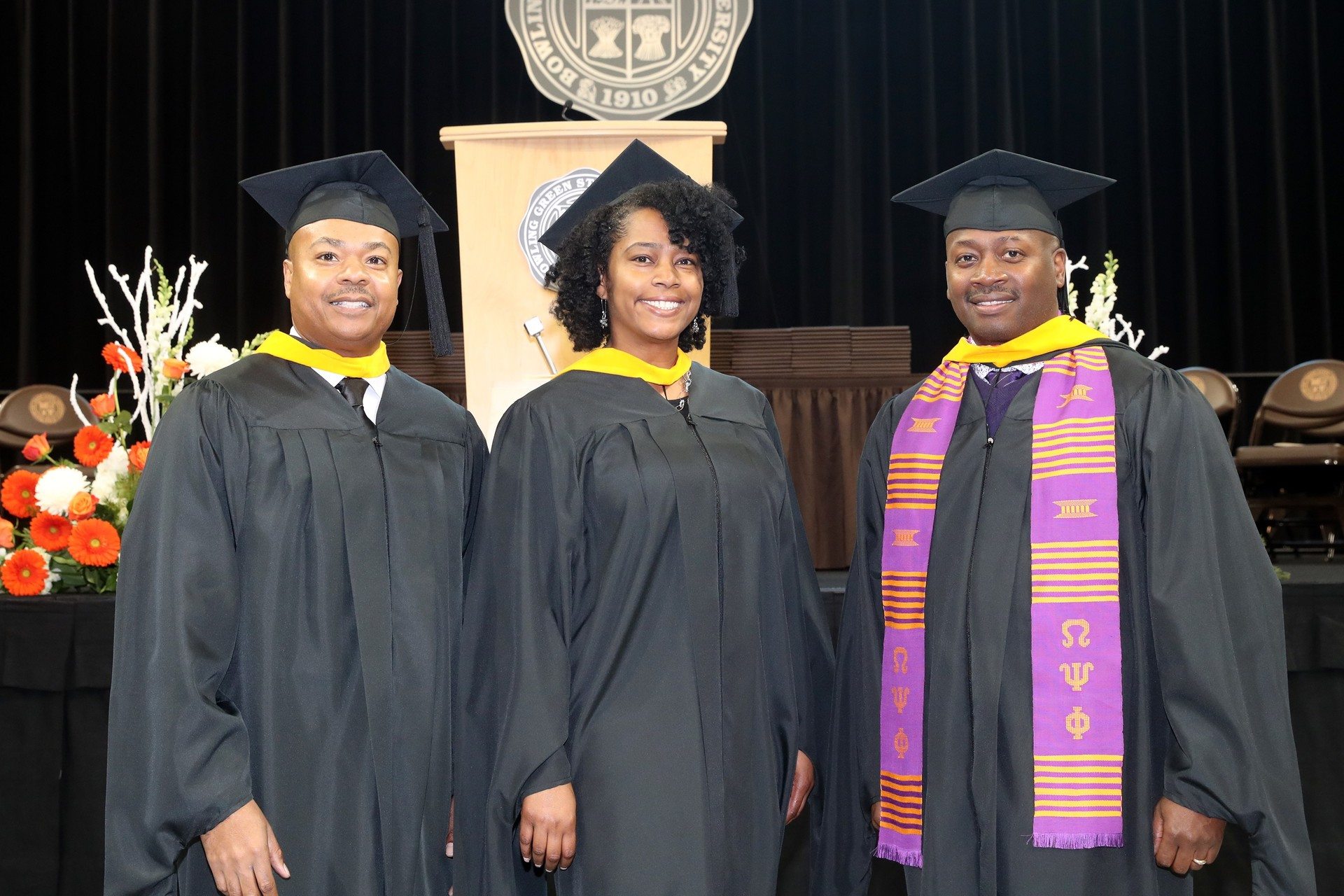 The program is offered on campus and online through eCampus, which supplements a full-time work schedule of students. The eCampus program is convenient and flexible for all students, regardless if they are in Bowling Green.

Many students in the program already have successful careers in criminal justice, and the Master of Science in Criminal Justice program helps them "go farther" after graduation.

Three students in the December Class of 2019 have created already successful careers, but credit BGSU for allowing them to position themselves as competitive individuals in their field for the future.

The Master of Science in Criminal Justice has been challenging for Williams, but rewarding from the start. He had to face the obstacle of balancing work, school, and home life but says that the online program's flexibility was key.

"I have definitely learned a lot within the last two years of being in the program," Williams said.

Williams chose BGSU for two reasons: its credibility and price. He had been researching master's programs and was intrigued about BGSU's online master's program for criminal justice because it was ranked as one of the best in the nation. He wanted to make sure there was a legitimacy to the program, from an accredited school. Williams chose BGSU because of the fair pricing of the program, compared to other competitors.

After graduating in December, Williams hopes to use his master's degree, work experience and past police training experience to teach criminal justice to the future police and law enforcement.

Elaine Bryant has worked with the Detroit Police Department as a law enforcement officer since 2000. Currently, she is the deputy chief, managing the east side precincts and specialized units in the metropolitan division of Detroit.

Bryant has previous work experience in the medical field, working directly with patients. She chose BGSU because her colleague, Williams, was looking for opportunities for employees to gain more experience. Bryant said that the program has been challenging, but in a good way. She has been forced to think outside of the box and go deeper into the theory and different aspects of criminal justice, rather than just working in the field.

Working and completing classes online can be tough and it isn't any different for Bryant. She had to work on schoolwork while everyone else was sleeping. Although she lost a lot of hours of sleep, Bryant is forever grateful for the new skills she has learned because of the program.

"It's given me the ability to actually create a couple of different programs, think outside the box and implement some of the things I've learned," she said. "This master's degree is allowing me to enhance what I'm already doing and possibly opening more doors for opportunities for more growth."

Elvin Barren was appointed to chief of police of the Southfield Police Department in July after spending 21 years with the Detroit Police Department. Before serving Detroit, Barren served eight years in the U.S. Navy. He was stationed in Norfolk, Virginia, before returning home to Michigan.

Barren credits BGSU's program for being a positive experience. The online aspect of the program was a great benefit to him because his work keeps him busy throughout the week. Faculty are able to understand that many students also work full-time jobs while taking classes. Like Bryant, Barren heard about the program through Williams. Barren was impressed by the accreditation and national rank of BGSU's Master of Criminal Justice program.

Barren said that the topics are relevant and topical to the criminal justice field and have helped him learn up-to-date information and best practices in criminal justice. He has also learned about different initiatives and strategies to implement at the Southfield Police Department.

Barren hopes that his new degree will help him excel at his new position and eventually teach criminal justice in the future.

"Bowling Green State University has prepared me to move in that direction with my experience in law enforcement and the educational component," Barren said.