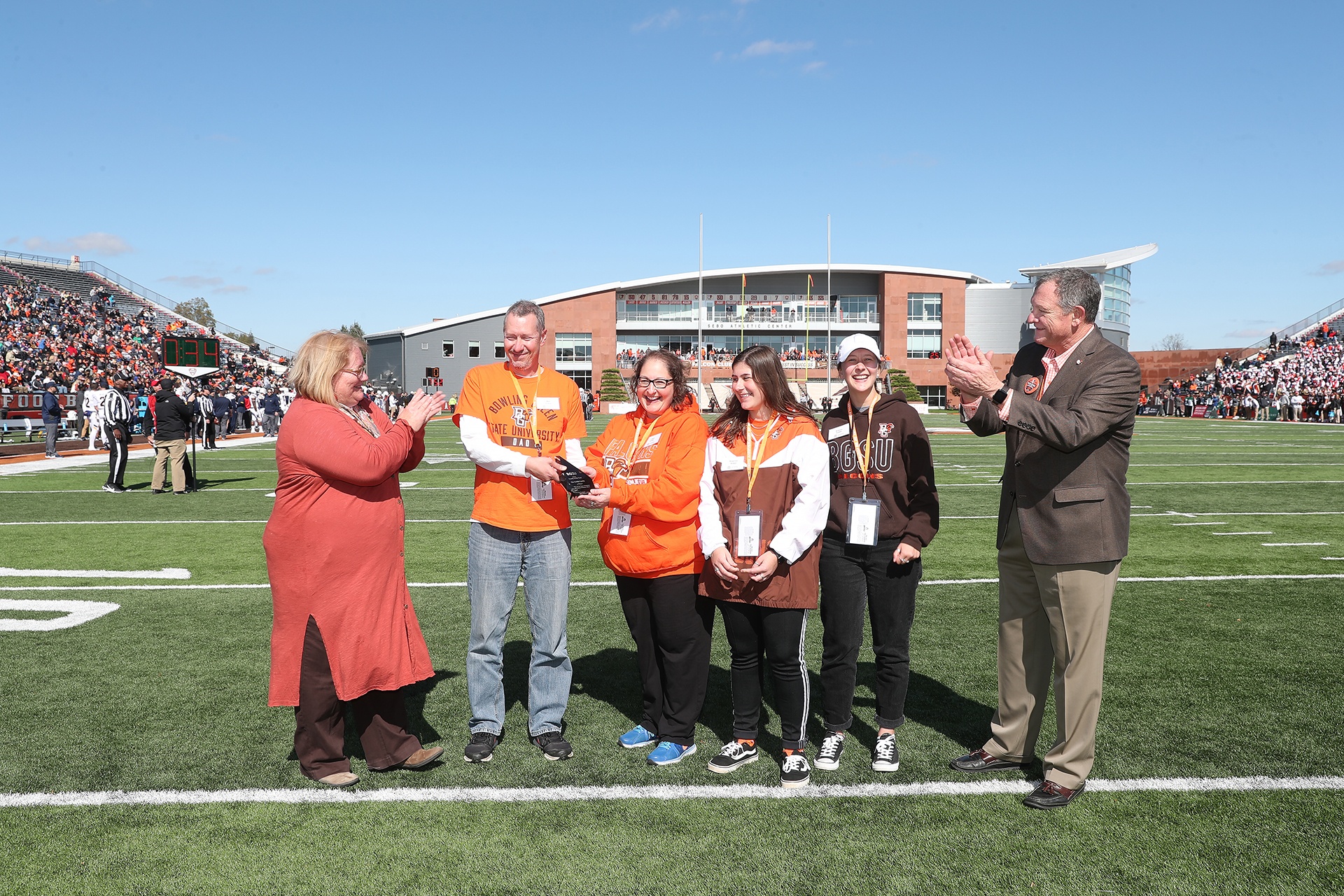 Falcon Family of the Year

Her parents have never missed a week, and she’s kept every single card.

“If I’m waiting for one to come and it’s taking a second to get through the mail, I’ll pull out an old one and read it,” said Scebbi, a junior who grew up in Cleveland and attended Saint Joseph Academy. “When I was in the residence halls, my desk was covered with them. For me, that just showed they are very committed to making me know they’ve always got my back. My family is pretty cool; they’re great. I thought if I entered my essay and won it would be a great way to say thank you to them.”

The Scebbi family — Brionna, mom Gidget, dad Matt and sister Rhiannon — was recognized during Falcon Family Weekend as the Falcon Family of the Year and presented with a plaque during halftime of BGSU’s 20-7 victory over the University of Toledo on Oct. 12.

“My parents love Bowling Green,” she said. “They come to every Falcon Family Weekend. I’m happy here, so they love coming to visit. They stay on top of all BGSU sports and read all of the articles and follow all of my extra-curricular activities on social media. I feel like they’re very connected to BGSU even though I’m the only reason they have to be connected to BGSU.”

Her parents even made a hashtag to help follow along on social media: #ScebbiStrong.

“It’s like they’re rolling along, if you will, as Falcons with me,” she said. “They have the Bowling Green ‘Mom’ and ‘Dad’ shirts. They’re very proud Falcons.

“They are frequent visitors to Grounds for Thought downtown, the Bowen-Thompson Student Union and the Michael & Sara Kuhlin Center every time they drive in from Cleveland. This year, they were excited to get a photo with the BGSU letters in the Union Oval to add to their collection of BGSU selfies.”

Scebbi is a multiplatform journalism major with a minor in popular culture.

She also is a recipient of the Presidential Scholars Award. PSA recipients are students who lead the Honors College and the Honors Learning Community through their work inside and outside of the classroom. In addition to receiving a full, in-state tuition scholarship, PSA students also work collaboratively in a cohort with other top scholars to help improve the Honors College during their time at BGSU.

“As a recipient of the Presidential Scholarship, I have the opportunity to go to school at BGSU without bringing on significant financial cost to my family,” Scebbi said. “I am grateful for this scholarship, and my family gives back as often and as much as they can to various scholarship funds.

“Because of the scholarship, I am able to get the entire BGSU experience. I am able to be a more well-rounded student because of it — it means everything.”

She originally thought about coming to Bowling Green to be a teacher, but after some self-reflection and advice from a high school mentor, she decided to major in journalism. This year, she is the editor-in-chief for BG News.

The University’s opportunities offer variety and flexibility that aren’t necessarily available at other colleges, Scebbi said.

“I was able to come in as a freshman and jump into everything that I wanted to jump into and that’s exactly what I did,” she said. “I was able to delve into all aspects of my journalism interests — newspaper, radio, broadcast and public relations — because I wanted to try everything. Journalism was a new decision for me and I wanted to make sure I loved it. It didn’t take any time at all before I realized this it was the absolute right choice for me.”

Scebbi said the first thing that drew her to BGSU was that it felt like home.

“It was the people here that made it feel that way, and three years later it’s still the people here that really adds to the great education I’m already getting,” she said. “Not only do I have a support system back home but also a support system here from everyone that I met in my classes, in the newsroom, in CHAARG and Dance Marathon. BGSU felt like home from the get-go, and that feeling has only grown over the last three years.”

Part of the BGSU experience, Scebbi said, are the opportunities to learn and grow outside of the classroom.

“This past summer, I studied abroad for six weeks in Italy — I am sure my mom did not sleep that entire six weeks,” she said.

She also was a marketing intern in the summer for JBC Technologies in North Ridgeville, Ohio. She provided website content management and social media support for the Cleveland-area manufacturing company.

Scebbi also has been involved with Dance Marathon and CHAARG, a women’s health organization on campus, serving as vice president of media and a small group leader.

After she graduates, her dream job is to be a digital producer for a news organization.