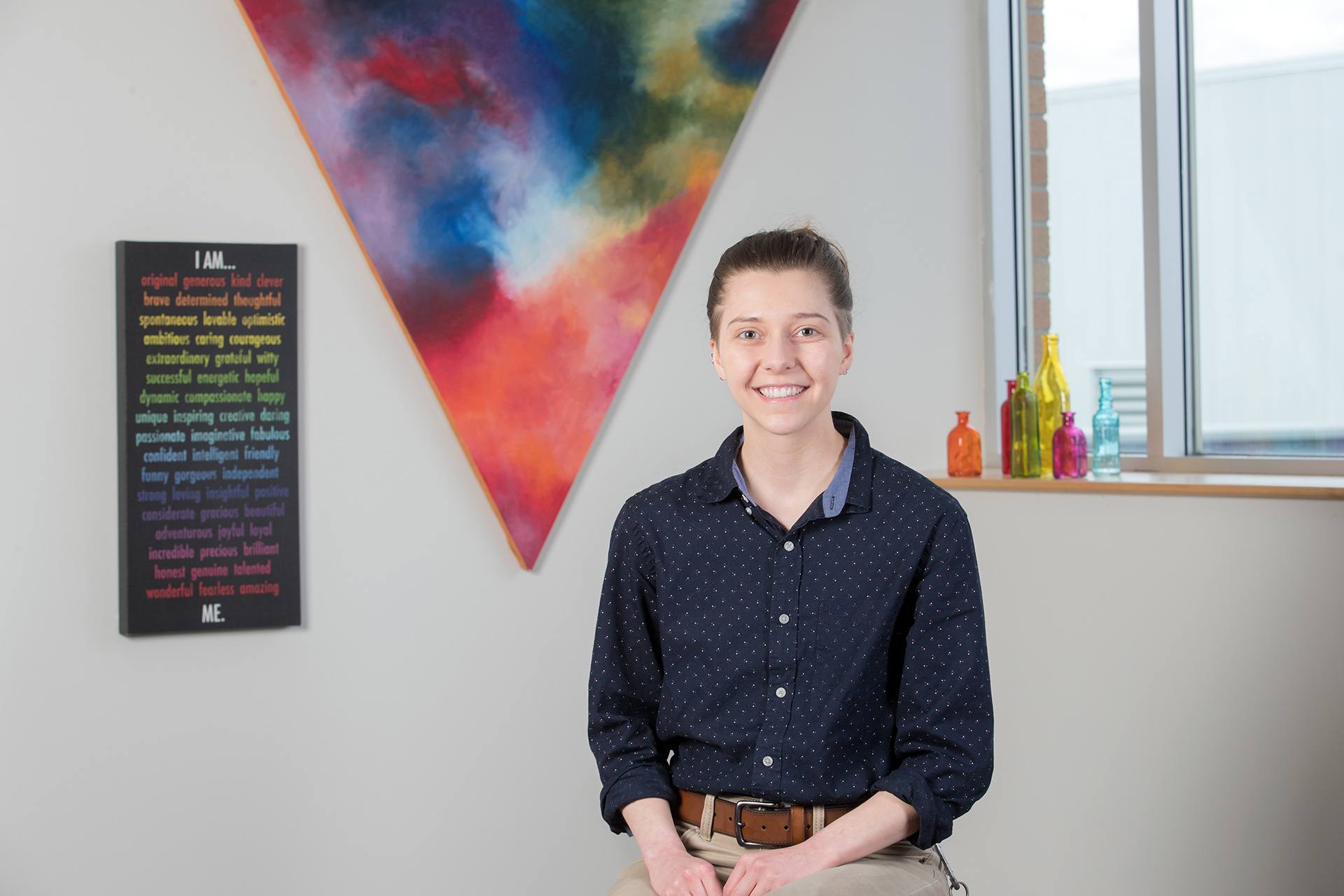 Class of 2019 Success Stories: BGSU allows Elle Fullenkamp to grow beyond limitations of her small hometown

It wasn't until her senior year of high school that Elle Fullenkamp decided to follow a career path in education.

After leaning toward social work and psychology, an amazing English teacher during Fullenkamp's junior and senior years changed her mind. She found value in the language arts as she saw herself and peers grow as readers, writers and people.

"My teacher engaged the entire class in critical discussion of the books and short stories we were reading," said Fullenkamp, who grew up in Coldwater, Ohio, a small town southwest of Lima. "He made me think and helped me recognize a talent for writing and analysis I did not know I possessed."

On campus, she participated in a mock critical thinking class that offered an active discussion on the media depictions of the unrest in Ferguson, Missouri.

"With this experience, I knew BGSU would deliver the challenge and support that I was looking for in a school," Fullenkamp said. "After that weekend, I knew I had found a good fit."

As an incoming freshman, Fullenkamp's high school GPA and ACT composite scores earned her the Presidential Scholar Award through Honors College. This renewable scholarship was one of the main reasons that BGSU was an affordable option for Fullenkamp.

Student organizations, including the Vagina Monologues, Queer/Trans Student Union and Task Force on Sexual Assault, rounded out her academic career.

The annual theatrical production of the Vagina Monologues, sponsored by what is now the Feminist Student Union, works to raise awareness about issues affecting those with marginalized gender identities. It also raises money for a local domestic/sexual violence agency, the Cocoon.

"Coming from the small town I did, I had never been in an environment where people spoke so openly about political and social issues," Fullenkamp said. "In that experience, I made friends with people who held backgrounds and beliefs and identities that I had never been exposed to before."

The Vagina Monologues became a space for her to explore ideas about herself and the world around her. She became a co-director for the next two years in hopes of creating that same space for other students.

As a sophomore, Fullenkamp got involved with VISION, now named the Queer/Trans Student Union, a student organization for LGBTQ+ students and allies.

VISION's weekly meetings and occasional events were a great place to find the community and support she needed. But it was VISION's education/outreach initiative, the Panel Program, that really sparked her involvement.

The Panel Program brings panels of LGBTQ+ students to classrooms and campus/community groups to answer questions and break myths about their own experiences holding LGBTQ+ identities. This helps reduce stigma and prejudice toward LGBTQ+ students on campus.

As an educator, Fullenkamp fell in love with the Panel Program's mission.

"I firmly believe many people are harmful toward marginalized folks due to a lack of education and exposure to people different than them, rather than conscious malice," she said. "I saw the benefits panels had on the people attending them and on panelists like me, who got the opportunity to talk about their experiences in a supported space."

From 2017 to 2019, Fullenkamp was QTSU's education/outreach chair, scheduling and facilitating the Panel Program. She also set out to better the program by creating training curriculum and updated resources/presentational materials as part of her Honors College project.

"I conducted research on educational and sociological theories," she said. "With my position, I left behind a curriculum and resource guide for future education/outreach chairs. It's my hope that this guide will leave future leaders with the tools necessary to continue to create stronger community between LGBTQ+ and non-LGBTQ+ folks alike at BGSU."

Fullenkamp also served as one of three undergraduate student representatives on President Mazey's Task Force on Sexual Assault in 2017.

Through her outstanding efforts in the LGBTQ+ community, Fullenkamp was awarded the Outstanding Commitment to the LGBTQ+ Community award through BGSU's LGBTQ+ Resource Center.

Looking back, Fullenkamp said she is thankful for many individuals who made a significant impact on her time at BGSU and her future.

Dr. Heath Diehl from the Honors College pushed her to think, write and communicate differently and better. Dr. Katie Stygles from the LGBTQ+ Resource Center and Dr. Bill Albertini from the English Department supported Fullenkamp through the hard times of coming out.

Dr. Joanna Weaver from College of Education and Human Development helped her stretch through the growing pains of making the transition from student to teacher, along with the mentors who took her under her wing and the many friends who grew and changed alongside her.

This especially applies to small-town residents, she said.

"Your world is about to get so much bigger — embrace it. You're going to feel out of your element, challenged and uncomfortable. Lean into it, because it's why you're here. It's what will make you grow into who you want to be."