Bees, the pollinators of a large percentage of the food we eat, are under attack and declining in numbers. Parasites, pesticides and disease are among the known factors that impact bees’ viability in the ecosystem.

A new study by Bowling Green State University scientists reports that urbanization might impact bees’ body temperatures and water content and possibly contribute to the decline in bee populations. The research by Justin Burdine, a BGSU doctoral candidate in biology, and Dr. Kevin McCluney, an assistant professor of biology, appears in a recent article published in Scientific Reports, an international peer-reviewed science and technology journal.

Their research takes a physiological approach that looks at how bees may respond to climate change that is related to urban development. Specifically, they measured how certain bees lose moisture in cities becoming desiccated.

According to Burdine, “We know a lot about bees and how they respond to flowers and heat, but no one has really looked at desiccation, which is a big part of climate change. 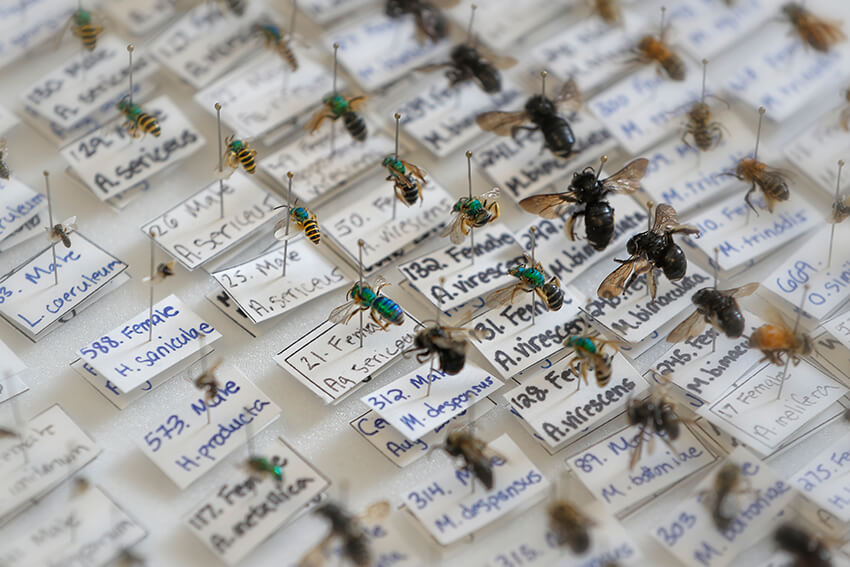 “Climate change not only affects temperature, but also changes water availability by increasing the frequency of droughts and heavy rainfall events,” he said. “And that could have an impact on bees and their ability to pollinate plants."

During the summer of 2016, Burdine very carefully, and without any stings, hand-collected 90 bees – 30 each of sweat bees, honeybees and bumblebees from six urban gardens and parks in Toledo.

After earning his bachelor's degree at BGSU, Burdine worked as an urban farmer with Americorps VISTA in Toledo, prompting him to choose those same cityscapes for the study’s collections. Cities tend to be warmer and exhibit “urban heat islands” because of the abundance of pavements, which absorbs the sun and re-radiates it. They also chose a medium-sized city such as Toledo because “for every large city, like New York City or Chicago, L.A. or San Francisco, there are 50 Toledos. So, if it’s happening here it could happen in other similar cities,” Burdine said.

“It’s the same with water,” he added. “Warmer temperatures lead to water evaporating more and the impervious surface of the pavement lets the water run off so it tends to be a little drier.”

Their work differs from previous research that focused on what’s the temperature bees can survive, McCluney said.

“The increase in temperature associated with either cities or climate change can cause the bees to dry out because when it’s hotter they lose more water. It may not matter (about bees’ temperature) if they dry out first and die.”

According to their analysis, honeybees are extremely sensitive to changes in water content, but less so for sweat bees and bumblebees, Burdine said. “Honeybees will actually stop and drink water when it is accessible.”

The research suggest that Toledo area urban farmers and gardeners should provide access to water and shade to benefit honey bees, prevent desiccation, and in turn, benefit pollination for areas as far as five kilometers away. Burdine and McCluney are quick to point out that the research is specific to Toledo, but that their results might spur other researchers to use the BGSU techniques to test the results in other cities of similar sizes or bigger cities.

There are approximately 4,000 native bee species that can be studied across the country.

“I think we provide the method about how to calculate desiccation tolerance and we show them why it matters and why this work should be done,” Burdine said.

“We can’t predict if our recommendations to provide access to water and shade will work in big cities such as Phoenix and Orlando, but for people in Midwestern cities adding flowers and water sources has a big difference on the abundance and diversity of bees.”

The reviewers thought the perspective was really important, so I think it will have a broad impact for scientists,” McCluney added.

This is Burdine’s sixth publication, “but it’s probably the biggest and the one I’ve put the most work into,” he said. He has also published two papers with undergraduate researchers who he has mentored.

He is also working on two additional papers on related topics: how habitat characteristics of urban areas influence pollination and what species of bees are most influenced by urban area management.

Burdine expects to graduate in May and move into a faculty career. He enjoys mentoring young scientists, but hopes to continue some of his research with bees. “I’m really interested in the importance of bees in our food system.”