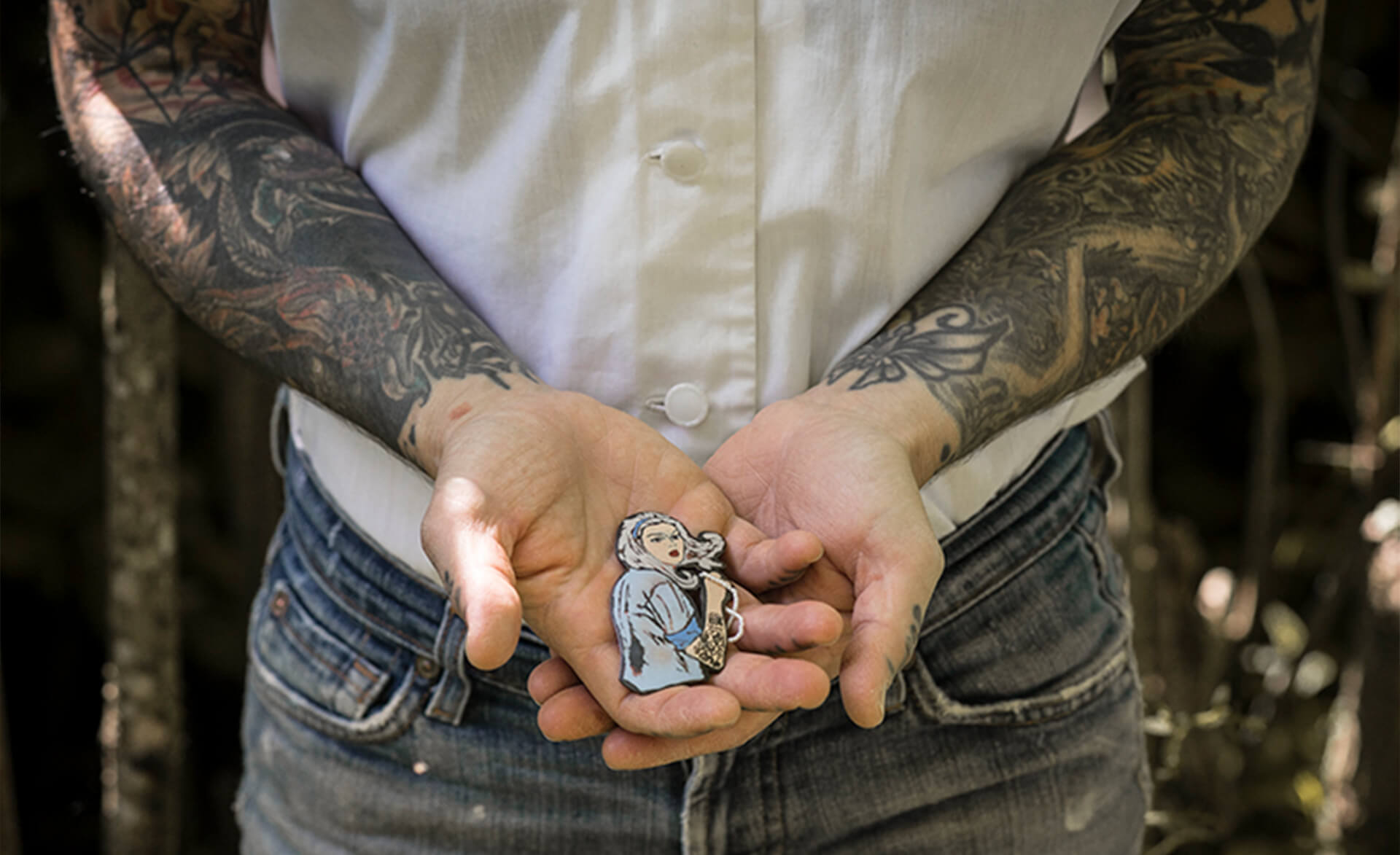 The BGSU alumna and metals/jewelry instructor in the BGSU School of Art says she creates “colorful, wearable and functional art laced with sarcastic humor.”

The copper and enamel art she produces are fun, charming and poignant in their messages, mostly with themes that explore feminist ideas.

Her unique creations have earned Saneholtz a spot in the Women to Watch Ohio-2018 exhibition. She is one of 10 female metal artists whose work is showcased through July 7 at the Riffe Gallery in downtown Columbus. The exhibition is an offshoot of the Women to Watch exhibitions of the National Museum of Women in the Arts.

Three of Saneholtz’s brooches are among the featured artwork in the exhibition that includes jewelry, sculpture and two-dimensional works by women artists in Ohio. The brooches on display are part of her wearable series that features tattooed women.

The humor of these pieces comes in the juxtaposition of the women’s images she uses from circa 1950s romance comic books found in her grandmother’s house and read by her mother, ideas from antiquated dating guides and the tattoo art she discovered in her research of women with tattoos. During her research, Saneholtz realized many women with tattoos represented an early ideal of feminism.

Among her findings were Betty Broadbent and Annie Howard – tattooed women who were side acts for circuses in the late 1800s and early 1900s. While on one hand, they were sexualized wearing skimpy outfits on stage and showing off their body art, the reality was, “they were in control of their bodies, chose to have the tattoos and became financially independent” as a result of their decisions to perform in circuses, Saneholtz said.

With her Midwest sarcasm and focus on feminist issues, Saneholtz soon decided the tattoo art was a perfect counterpoint to the male-dependent females from the comic books.   Vintage photographs of Broadbent’s and Howard’s tattoos—approximately 800 between them—became the ink on the women from the romance comics and the feminist statement for this series of Saneholtz’s artwork.

The petite, curly-headed, dynamic artist comes by her talents and energy naturally; her mother, Karen, a graphic designer with an extraordinary creative eye, has long been a role model, in art, values and tenacity. Though she may have read the comics that depicted women as being dependent on men, her actions and conversations dispelled the myth of the roles of post-World War II suburban housewives and empowered her young daughter to think and create for herself.

“I’ve been doing that (metals) since I was 14 because of that Ohio Arts Council grant that Mrs. Laabs received,” Saneholtz said.

Her high school teacher was also her inspiration for choosing a career in art, initially to emulate her as a high school art teacher, and later because of BGSU Distinguished Professor of the Arts Thomas Muir’s influence, to pursue her Bachelor of Fine Arts degree, concentrating on metals and jewelry. She graduated from BGSU in 2008 and received a Master of Fine Arts from East Carolina University in 2011. She taught at East Carolina University, ECU's Italy Intensives Study Abroad Program in Certaldo, Italy, and Appalachian State University in Boone, NC. For two years, she worked at J. Cotter Galleries and Studio in Vail, Colorado, as gallery manager and assistant studio manager before returning to teach at BGSU in 2017.

“It’s nice to be recognized by my home state,” Saneholtz said about being selected for the Women to Watch exhibition. “It’s great to come home and be part of this strong arts community.”

In addition to having her brooches displayed in the exhibition, Saneholtz also will present a workshop about her enamel and champlevé methods from noon to 1 p.m. June 14 at the Riffe Gallery, first floor lobby of the Vern Riffe Center for Government & the Arts, 77 S. High Street in Columbus.